Mongolia Arrives at COP27 with Largest Delegation in Country's History

Mongolia Arrives at COP27 with Largest Delegation in Country's History

Mongolia's delegation to COP27 is the largest in the country's history. What will the country focus on at this year's climate summit?

The COP27 has begun in Sharm El-Sheikh, Egypt. Leaders from over 100 countries and about 50,000 representatives from 180 countries are participating this year, being held 6-18 November 2022.

This year, Mongolia is paying huge attention and participating in more than 60 people which considering the largest delegations from Mongolia in COP’s history. President of Mongolia, Ukhnaa Khurelsukh, will be attending high-level meetings on November 7-8, and will present Mongolia's position on combating climate change, desertification, and mitigating global warming, as well as presenting policies and activities that have been implemented at the national level.

The COP27 officially included loss and damage in its agenda for the first time. According to the National Emergency Agency of Mongolia, the country faced direct economic losses of 1.6 trillion MNT between 2009 and 2019. Additionally, Mongolia need 30.3 trillion MNT or USD11.5 billion financing on adaptation and mitigation of climate change to reach its climate target by 2030.

“It is an important issue for less developed countries how to receive support, then deliver that support locally. Within this context, [support from] the Green Climate Fund, the Adaptation Fund, the Special Climate Fund, etc, that have been established to give support. However, addressing climate change is not just a matter of international organisations, to support developing countries. Mongolia needs to intensify its own efforts to combat climate change using public funds, also funding from the private sector,” said Damdin Dagvardorj, the Managing Director of Climate Change Development Academy.

When the pandemic hit, many countries were already grappling with economic challenges; inflation and poverty levels are rising, if no significant measures are taken to address climate change, developing countries will lose half a billion US dollars by 2030 and 1 trillion by 2050, according to the London School of Economics and Political Science. Mongolia emits 0.1 percent of the world's greenhouse gases today, half of which comes from the energy sector, but its per capita greenhouse gas emissions are 2.7 times higher than the world average, ranking 23rd in the world. Also, it’s estimated that 74 million tons of carbon dioxide equivalent or greenhouse gas emissions would be emitted by 2030

In its Nationally Determined Contributions document, Mongolia targets to reduce its emissions by 22.2% by 2030. But if conditional mitigation measures such as the carbon capture and storage and waste-to-energy technology are implemented, then Mongolia could achieve a 27.2% reduction in its emission by 2030.

“We should not only talk about this issue at the national level, but also at the international level. We should also consider what kind of collaborative pathways we can pursue, and where we should get our support from,” said Zamba.

Last year at COP26 in Glasgow, Khurelsukh introduced the One Billion Tree initiative by 2030. Since then, the country has planted 1 percent or 10 million trees, while biggest mining companies in Mongolia have pledged funds to plant 600 million trees. The One Billion Tree initiative is expected to absorb 11 percent of greenhouse gas emissions and neutralize desertification in the region.

This is a summary of a broadcast. Watch the original piece in Mongolian from NTV Broadcasting below.

This story was produced as part of the 2022 Climate Change Media Partnership, a journalism fellowship organized by Internews’ Earth Journalism Network and the Stanley Center for Peace and Security. It was first published in Mongolian by NTV Broadcasting on 8 November 2022 and has been translated to English and lightly edited for length and clarity.

Banner image: The opening plenary of COP27 / Credit: UNFCCC/Kiara Worth. 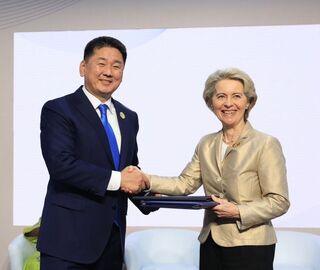