Mongolian herders turn to Soviet past to adapt to climate change

Mongolian herders turn to Soviet past to adapt to climate change

There is a strong whiff of nostalgia for the old Soviet era among nomadic herders who -- long after Mongolia rejected its communist status in the early 1990s -- are adjusting to an increasingly threatened way of life on the vast grasslands of the Mongolian steppe.

"A long time ago, we raised and sold livestock as a socialist collective," said Nerguibaatar L., a herder who lives in Ikh Tamir County in central Mongolia. "But that doesn't exist anymore because of free trade. We herders would like to go back to that if we had a choice." 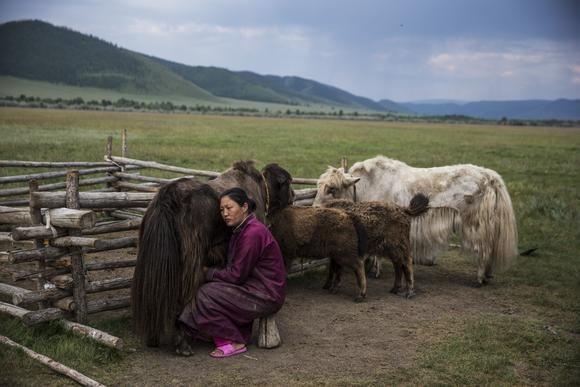 A herder milks a yak in Ikh Tamir, Mongolia on Aug. 3. (Photo by Taylor Weidman)

Given the ultimate failure of the Soviet Union, it seems a strange wish. But herders say they have two compelling reasons: better pasture management and climate-change adaptation.

Mongolia, a former Soviet satellite state, is experiencing climate warming at three times the global rate. Increasingly, unpredictable weather patterns of dry summers and harsh winters, called dzud in Mongolian, are destroying livestock and ruining the livelihoods of many herders -- the backbone of the Mongolian economy. According to the United Nations Coordinator for Mongolia, the latest dzud from November 2015 to March 2016 killed 1.1 million head of livestock and affected roughly 250,000 people.

Contributing to the problem is the degradation of Mongolia's once-lush pastures. Due to unsustainable herding practices, roughly 78% of Mongolia's pastures are degraded or becoming desertified.

In response, some herders, researchers and nongovernmental organizations in Mongolia have been experimenting with putting nostalgia for Soviet times into action. Since the early 2000s, goaded by three of the worst consecutive winters in recorded history from 1999 to 2002, herders in regions suffering from desertification have begun to band together in work collectives called "pasture user groups," or PUGs, to share resources and self-regulate their impact on the environment. More than a decade later, hard and anecdotal evidence appears to reveal that it's working.

Grass rehabilitation at the grassroots

Ask these herders why their beloved pastures are so degraded and many point to capitalism as the culprit. Mongolia traded socialism for capitalism in 1992, disbanding state-run herder work collectives, privatizing livestock and deregulating the nation's public pastures on newly minted free-trade principles. But as every herding family went into business for itself a tragedy emerged: Without proper regulations, pastures were overgrazed, resources were abused and herds grew to unsustainable sizes. Because the pastures were public, there was no individual incentive to downsize herds and protect the land. Into this landscape of exploited grasslands came the first pasture-user groups. Today, there are hundreds of PUGs scattered throughout the country.

Nerguibaatar is the leader of Ikh Tamir County's Federation of Pasture User Groups. Most of these groups were piloted and supported by the Swiss Agency for Development and Cooperation, or SDC, as part of its Green Gold Project. Formed to rehabilitate pasturelands, battle climate change and improve economic opportunities, Green Gold PUGs were formed by voluntary herding households in 2004 and quickly gained renown in the western regions of Mongolia.

"People were keen to get involved," said Nerguibaatar. "Families wanted to find new ways to deal with the land."

Such co-management projects throughout the country have shown tangible benefits since they first began to appear. The SDC has reported that since 2004, 130 herder co-ops have rehabilitated 5.6 million hectares of degraded pastureland, an area roughly equivalent to the landmass of Croatia. 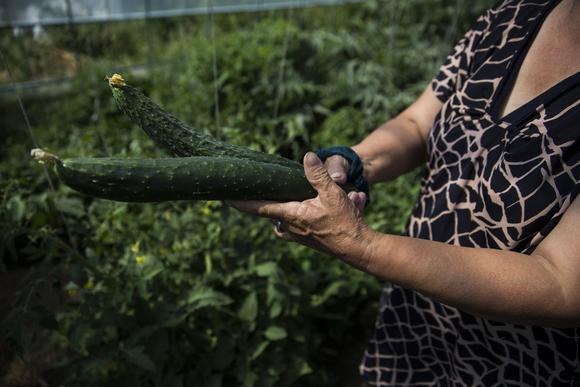 A woman picks cucumbers from her greenhouse in Ikh Tamir on Aug. 2. (Photo by Taylor Weidman)

These rehabilitated grasslands are making co-op herders better prepared to withstand the harsh winters that are becoming common in Mongolia. In addition to nurturing higher quality pastures, co-op members are pooling labor and resources to grow supplemental fodder for the cold season. This has minimized loss of livestock for PUG members, while nonmembers suffer worse fates. Nerguibaatar says that during this year's dzud, families that were PUG members lost less than 20% of their livestock, while families that were not members lost roughly 50%. He said these families are now in the process of signing contracts to join their local pasture user groups.

Economically, too, the co-ops have been a boon to herders, who are among the lowest-earning people in the country. Co-management groups promoted by one local NGO, the Environment and Development Association, reported increases in household incomes of 23% to 56% during the years 2013 to 2016. This is due not only to minimized livestock losses but also to collaborative side projects, such as taking out microloans for dairy production and growing vegetables. Hardy crops are now providing food security to PUG member families, as well as an additional income stream when excess produce can be sold at market.

Still, world history has seen many idealistic attempts at socialism fall under dictatorial rule, and the challenges of socialist systems often seem to outnumber the benefits. PUGs, too, have certainly met their share of challenges, but they seem surmountable in the larger scheme.

"There are small conflicts, like animals breaking fences," said Altan Gerel, agricultural production team leader at the Ikh Tamir PUG. "Sometimes we've seen herders intentionally herd their animals into our fodder and crops, but we've created a security posting and we haven't had problems since then."

So how are herder collectives achieving such positive results? One theory is that collectivism works best on small scales. Since herder PUGs work mostly within groups of three to eight families, decisions are made by stakeholders who self-organize and enter land-management contracts on their own terms. This differs from Mongolia's top-down form of state-mandated collectivism during the Soviet era.

Another reason is that shared work is part of the Mongolian cultural fabric.

"Herders have their own institutions, like a group of families sharing a winter pasture," said Enkh-Amgalan Ts., SDC's Green Gold Project manager. "They have this customary tradition of how they use the common rangelands. Based on that, we've helped herders form pasture user groups, but this in fact has an old name -- Mongolian herders call it khot ail, meaning 'small community.'"

Traditionally, these khot ail herded together, pooled labor and shared grazing rights. Today, PUGs use a rotational grazing schedule that allows pastures a seasonal resting period to rehabilitate. But the question of who grazes where is based on the same hereditary traditions that have been respected for generations. That has, perhaps, made for an easier transition to collective work and consensus.

To date, most PUGs have been supported by international donors and aid agencies, such as the United Nations Development Programme, the International Fund for Agricultural Development, the Asian Development Bank and the SDC. However, now that PUGs have established procedural and operational precedents, these co-ops are in a position to become autonomous and to scale up efforts without international aid.

"During the past four years, aid money just flew out of our hands. But in the future, we're hoping to use it sustainably. We're at a point now where we don't need to use it, so we can save it," Nerguibaatar said.

Only a decade after the first small PUGs were formed, these small-scale efforts are on their way to overtaking governmental efforts in size and influence. The SDC's stated goal is to spread collaborative pasture management throughout the nation and to make it a policy point on the national agenda.

"It's necessary to put better pasture management systems in place," said Dashzegve J., division head of animal health and reproduction at the Ikh Tamir County Secretariat. "There's currently no law involving pasture management. In the last eight years, the pastureland draft law has been brought to parliament, but it's always failed to get passed."

Now that PUGs are becoming sustainable -- generating more income, rehabilitating the environment and successfully adapting to climate change -- the era of deregulated pasturelands may be coming to an end.

"It's not an issue of a few herders. It's an issue of national importance," said Enkh-Amgalan. 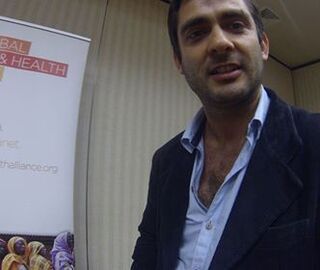 First day at the COP20: climate change consequences on health