The Intergovernmental Panel on Climate Change issues a stark warning on climate change; it also states how apocalypse can be averted.

The increased number and intensity of current heatwaves, floods, fires and storms all around the globe are caused by human-induced climate change. And it will get far worse unless we control our carbon dioxide emissions, the Intergovernmental Panel on Climate Change (IPCC) says in a landmark report.

The stark warning by scientists from 66 countries has been endorsed by all member states of the United Nations. In its summary for policymakers released on 9 August, Working Group 1 (WG1, the physical scientists) of the IPCC says: “Global surface temperature will continue to increase until at least the mid-century under all emissions scenarios considered. Global warming of 1.5°C and 2°C will be exceeded during the 21st century unless deep reductions in CO2 and other greenhouse gas (GHG) emissions occur in the coming decades.”

Right now, the world is 1.07 degrees Celsius hotter than in pre-industrial times, and the effects are there for all to see. Under current GHG emissions, the scientists predict a three-degree hotter world by the end of the century. Governments committed in the 2015 Paris Agreement that they would keep warming within 2 degrees and try for a 1.5-degree ceiling. But current emission controls are far from matching those commitments.

So, what happens in a three-degree hotter world? In this latest report, the scientists say: “Many changes in the climate system become larger in direct relation to increasing global warming. They include increases in the frequency and intensity of hot extremes, marine heatwaves, and heavy precipitation, agricultural and ecological droughts in some regions, and proportion of intense tropical cyclones, as well as reductions in Arctic sea ice, snow cover and permafrost.”

A crucial concern for monsoon-dependent South Asia, Southeast Asia and East Asia: the report says, “Continued global warming is projected to further intensify the global water cycle, including its variability, global monsoon precipitation and the severity of wet and dry events.” Swapna Panickal, a scientist at the Indian Institute of Tropical Meteorology and one of the IPCC report authors, told a group of journalists that the monsoon change report of India’s Ministry of Earth Sciences fed into this conclusion.

There is a way out

Scenarios with very low or low GHG emissions still lead to global temperature rise of 1-1.9C or 1-2.6 degrees, respectively, this century. Those are the levels where the world can adapt and live with the impacts.

For the very low emissions scenario, the IPCC says: “It is more likely than not that global surface temperature would decline back to below 1.5°C toward the end of the 21st century, with a temporary overshoot of no more than 0.1°C above 1.5°C global warming.” The medium scenario leads to a rise of 2-4.5 degrees. Current human activities lead to this, accounting for the IPCC prediction of a three-degree hotter world by the end of the century.

"Current human activities lead to a three-degree hotter world by the end of the century."

Higher-emission scenario models confirmed by the IPCC lead to a world hotter by 3-7 degrees or 5-8.5 degrees. In such scenarios effects that may not be controllable will start showing within 20 years.

Every additional 0.5 degree of global warming causes “clearly discernible increases in the intensity and frequency of hot extremes, including heatwaves and heavy precipitation, as well as agricultural and ecological droughts,” the report says.

Due to sea level rise, extreme sea level events that occurred once per century in the recent past are projected to occur at least annually in more than half of all areas.

Friederike Otto, associate director of the Environmental Change Institute at the University of Oxford, told a group of journalists: “It is still possible to limit global warming to 1.5°C. If the world reaches net-zero carbon emissions by 2040, there is a two-thirds chance of doing that. If it reaches net zero by 2050, there is a one-third chance.”

With CO2 concentrations in the atmosphere higher than at any time in at least two million years, the world is already experiencing some effects that cannot be reversed – glacier retreat, sea level rise, higher salinity and acidity, and lower oxygen levels at the sea surface. Heatwaves and sudden heavy rainfall are already more frequent and more intense across land. Marine heatwaves have approximately doubled in frequency since the 1980s. 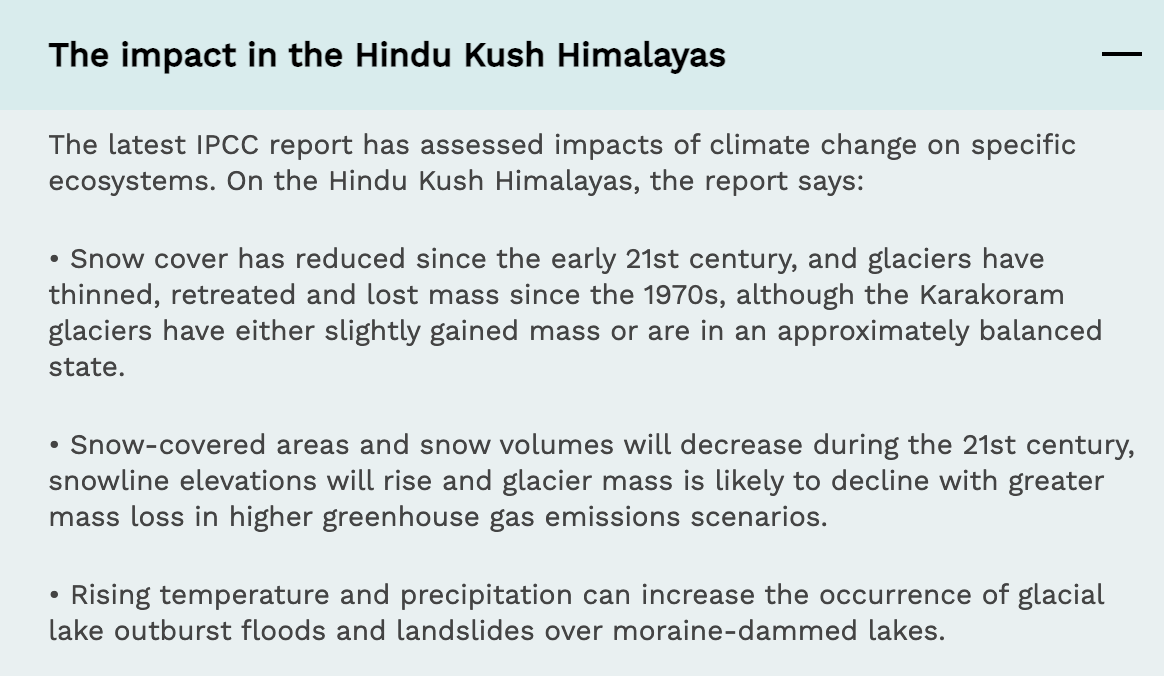 The air pollution blanket over South Asia, East Asia and West Africa has partly counteracted the warming effect of increases in monsoon rainfall in the last century. But as countries rein in air pollution – as they should for health reasons – the cloudburst problem will get worse, the report warns. Already, there are more severe cyclones as well.

The IPCC says there is now higher probability of compound extreme events – heatwaves, droughts, and wildfires when windy conditions are added. 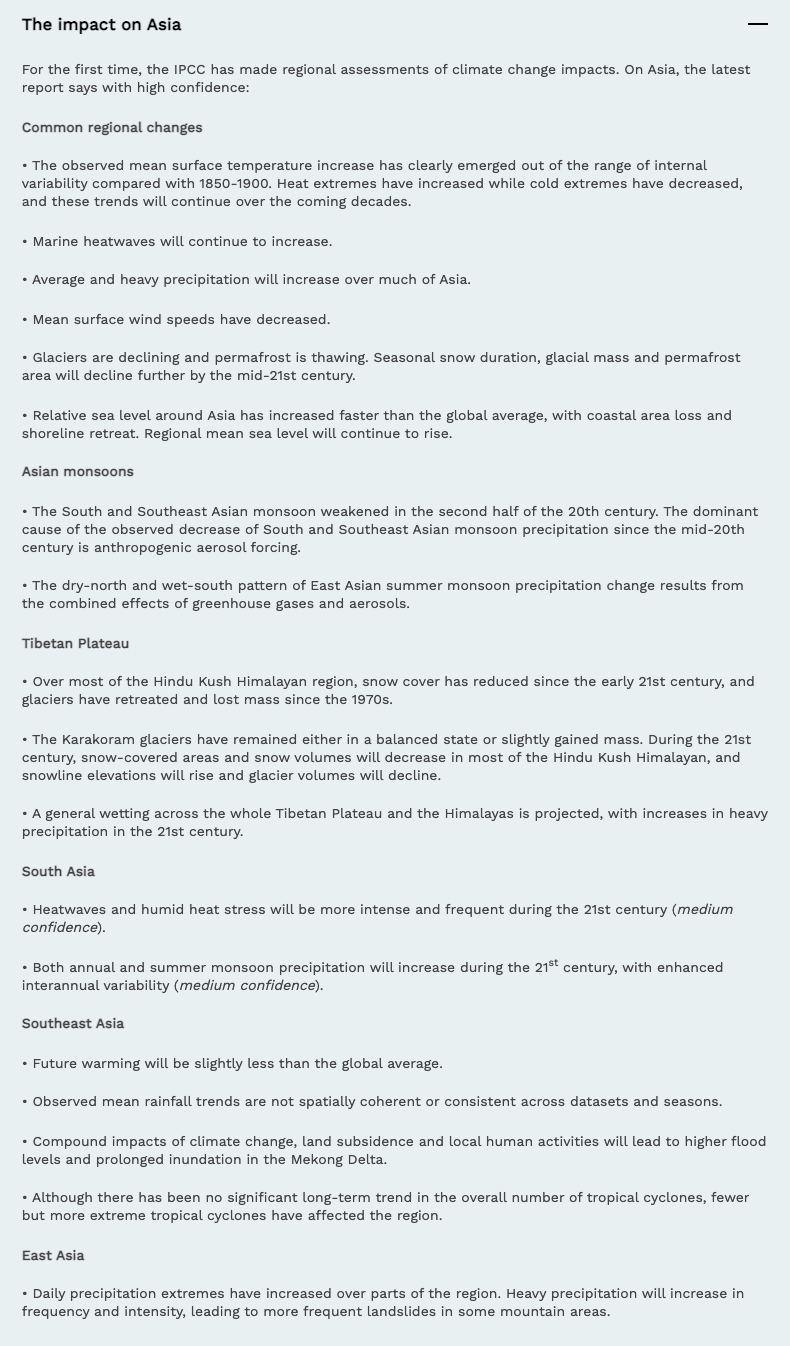 IPCC chair Hoesung Lee of South Korea said at the launch: “Unless there are immediate, rapid and large-scale reductions in greenhouse gas emissions, limiting warming to close to 1.5°C or even 2°C will be beyond reach.”

Working Group 1 co-chair Panmao Zhai of China said: “Stabilizing the climate will require strong, rapid and sustained reductions in greenhouse gas emissions, and reaching net-zero CO2 emissions. Limiting other greenhouse gases and air pollutants, especially methane, could have benefits both for health and the climate.”

The report is likely to impact climate negotiations at the next summit of the UN Framework Convention on Climate Change, scheduled in Glasgow this November. Summit president Alok Sharma of the UK said: “Our message to every country, government, business and part of society is simple. The next decade is decisive, follow the science and embrace your responsibility to keep the goal of 1.5°C alive. We can do this together, by coming forward with ambitious 2030 emission-reduction targets and long-term strategies with a pathway to net zero by the middle of the century, and taking action now to end coal power, accelerate the rollout of electric vehicles, tackle deforestation and reduce methane emissions.”

Ajay Mathur, director-general of the International Solar Alliance, said: “The global energy sector (power, heat and transport) accounts for around 73% of our total emissions… It becomes ever more important for us to be able to meet our growing energy needs without adding more CO2 to the atmosphere. Solar energy offers an ideal solution to all countries.”

Saleemul Huq, director of the Dhaka-based International Centre for Climate Change and Development, said: “G20 countries rapidly need to switch gears and this time stick to the pledges of delivering policies that ensure that we don’t exceed 1.5°C warming by the end of the century.”

Sonam P Wangdi of Bhutan, chair of Least Developed Countries Group, said: “By COP26 (the UN climate summit), developed countries must deliver their decade-old commitment to provide USD 100 billion annually and keep on increasing it as per the needs of countries facing climate impacts.”

Roxy Mathew Koll, senior scientist at the Indian Institute of Tropical Meteorology, said: “We need to urgently map the risks based on these projected changes, but in India we don’t even have a country-wide risk assessment based on observed changes. We might need to redesign our cities. Any kind of development should be planned based on an assessment of these risks – whether it is expressways, public infrastructure or even a farm or a house."

This story was originally published on 9 August 2021 in The Third Pole, a media outlet supported by EJN. It has been lightly edited for length and clarity.

Banner: Dhamakhali, a flooded coastal village in West Bengal, India, on 28 May 2021. The latest IPCC report says such flooding will become more frequent and more severe due to climate change / Credit: Alamy.