Logging in the Upper Guinea forests of Ghana. Photo by Nicole Arcilla

The combination of legal and illegal logging in southwest Ghana’s tropical forests is having a devastating impact on bird populations in the region, according to new research published recently in the journal Biological Conservation.

Between 1995 and 2010, logging in the Upper Guinea rain forest — one of the world’s biodiversity hot spots — increased by over 600 percent. Researchers sampling bird communities in the same forest region discovered that the number of understory birds counted in 2008–2010 was more than 50 percent less than in 1993–1995 .

Globally, 50-90 percent of the timber harvested in tropical countries can be attributed to illegal logging. In Ghana, where the study took place, illegal logging accounts for an estimated 80 percent of timber extraction. Overall, the researchers noted, the rate of deforestation in Ghana is six times the maximum sustainable rate. 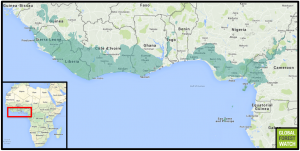 Understory birds are being particularly hard hit. For instance, the yellow-whiskered greenbul declined by 73 percent between 1995 and 2010, while the icterine greenbul plummeted by 90 percent.

“Our most disturbing finding was that more than half of all understory birds had vanished in only 15 years,” said lead author Nicole Arcilla, a researcher with Drexel University and the Zoological Society of London, in a press release accompanying the study. “If things continue as they are, in a few decades, these incredibly beautiful forests and their unique wildlife will be largely depleted, which would be a huge loss to Ghana, Africa and the world.”

Arcilla spent two years in Ghana studying understory birds as part of her research. At first her focus was on legal logging activities, but she soon found it impossible to ignore illegal activities.

“No one has looked at this issue in the past, to my knowledge, because illegal logging is an underworld issue, so it’s hard to quantify,” Arcilla said. In Ghana, she said, “it’s like the Wild West.”

The solution lies in beefed up forest management by the Ghanaian government — a daunting challenge in the face of such widespread illegal activity. The researchers point to a suite of urgently needed measures such as “increasing forest ranger patrols, increasing forest law enforcement and increasing implementation of measures to prevent illegal logging.”