NIGERIA: Importing fish amidst abundant ocean resources, the paradox of a nation

NIGERIA: Importing fish amidst abundant ocean resources, the paradox of a nation

Despite having a coastline of 853 kilometres bordering the Atlantic Ocean, as well as fresh and mangrove swamps, creeks, coastal rivers, estuaries, bays, and near and offshore waters, it is ironic that Nigeria still depends on fish importation to meet most of her fish demands. Eight out of the 36 Nigerian states, with 25% of Nigeria’s total population, share the Atlantic Ocean coastline – a major fishing resource. Yet, national supply cannot meet national demand. 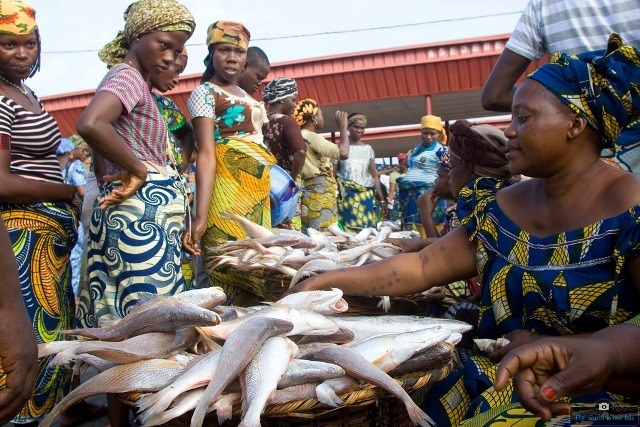 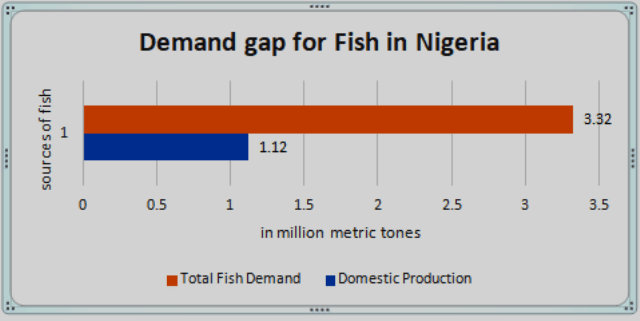 “In an ideal situation, importing these fish should not be happening in Nigeria since we already have the resources and potential for a fish industry that can meet our consumption demands and even provide exports” says Dr. Flora Olaifa, an Associate Professor of the Department of Fisheries and Aquaculture, Faculty of Agriculture in the University of Ibadan, Nigeria. She attributes the gap in local supply to the fact that Nigeria has not given enough support to its own industries, and it is only due to the recent government calls for industry diversifications that people are beginning to see the agricultural sector – fisheries inclusive – as a profitable industry.

Exports of fish, when they do happen, are comparably far lower than imports. According to Dr. Olajide Ayinla, President of the Fisheries Society of Nigeria and former Executive Director of the Nigerian Institute of Oceanography and Marine Research (NIOMR), Nigeria hardly exports pelagic fish, but some companies do export shrimps and smoked catfish derived from aquaculture.

The issue of imports exceeding exports in Africa is not confined to Nigeria alone; however, other African countries like Ghana and Côte d’Ivoire are supplied by fellow African countries- Morocco and Namibia. In fact, two-thirds of Ghana’s fish supply is from these exporting African countries. A report from the Food and Agriculture Organization indicates that these fish imports are largely “composed of low value small pelagic fish (horse mackerel, mackerel and sardinellas)”. These are highly ubiquitous in both urban and rural food markets in Nigeria and are the most common types of fish consumed by the average Nigerian. 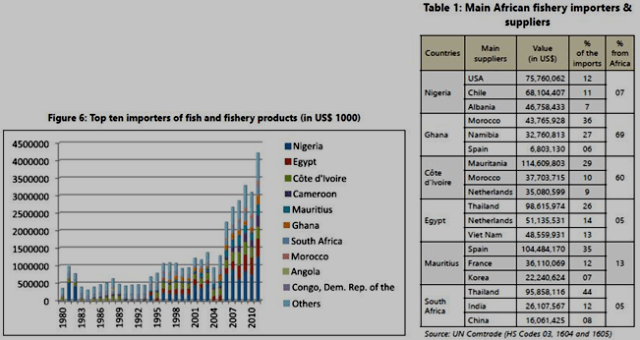 So why does Nigeria, like other African countries, still depend largely on foreign importation to meet local fish demand?

Ocean resources, when exploited sustainably, have the potential to provide wide-ranging benefits, however, Nigeria has been unable to realize these potential gains especially in the case of fish and seafood production. Commercial or industrial fishing takes place far off-shore, in the high seas, and is primarily conducted using fish trawlers—fishing net equipment that is actively dragged through water using one or more trawlers attached to a fishing vessel.

Both Dr. Ayinla and Dr. Ngozi Oguguah, a Principal Researcher at NIOMR raised valid concerns about fish trawling because it negatively impacts the ocean ecosystem, destroys the ocean floor, and prematurely kills young marine life. Instead, they suggested, if trawling must be done at all, regulations must be enforced to ensure that nets have larger selective mesh size with appropriate shapes to target only the needed fish. 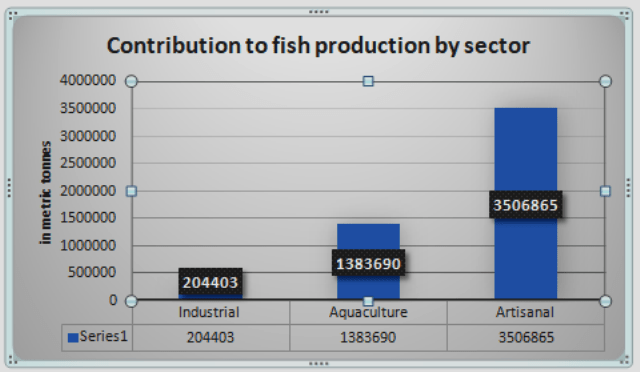 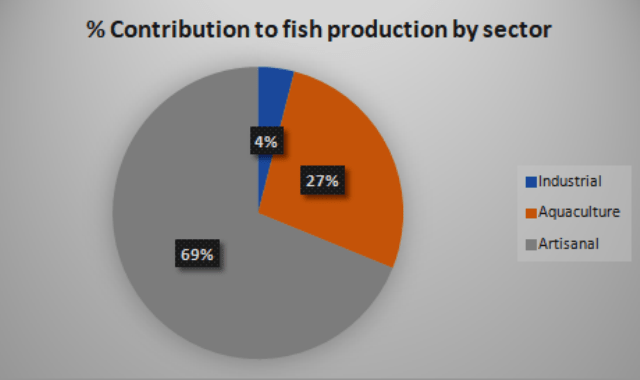 When asked about the low output from industrial fishing, Dr. Ayinla said industrial fishing is not as productive as expected because most people in the business cannot afford the vessels and equipment required for intense commercial fishing on the high seas. “Most current fishing vessels in Nigeria are old and are only capable of fishing at 0 to 50 meters below sea level,” he said, “and this range is only considered suitable for artisanal fishing, thereby limiting capability of resource exploitation on the high seas”.

The 2017 Country brief update on Nigeria by the FAO echoes this opinion, stating that the industrial fisheries sector in Nigeria previously made some progress but now they consist of mainly ageing fleet and infrastructure.

Dr. Ayinla also mentioned that because of extensive importation of fish and poor government regulations, investment in industrial fishing in Nigeria has long dwindled. Therefore, the high seas are now mostly explored by foreign vessels who own larger and more suitable fishing vessels, but most of whom operate illegally. It’s a similar problem faced by many coastal countries in sub-Saharan Africa: foreign industrial fleets operate in deep waters, while most Africa-based marine fishing fleets are artisanal.

Sea robbery and piracy remains another big obstacle to industrial fishing on the high seas. Dr. Oguguah cited a personal experience of sea piracy while she was aboard a fishing vessel conducting research and states that this issue has discouraged many people from exploring expansion opportunities in the industry.

Another pertinent issue limiting industrial fishing in Nigerian oceans is pollution, especially oil spillage and biological waste. Oil spillage is particularly prevalent in the Niger Delta region, which is reputed to be the second largest delta in the world with a 450km coastline and is characterized by rivers, creeks, and the Atlantic Ocean. According to Dr. Olaifa, who has conducted vast research on the effects of oil spillage in the Niger Delta, crude oil spills cause a fast and direct kill of fish and other aquatic life. Some by-effects of the oil spill may occur over a longer period, causing changes in the ocean environment which may, in turn, lead to gradual damage and change to the biology and organs of fish and aquatic life in the ocean. Dr. Olaifa further explains that it is a frequent occurrence to see captured fish exhibiting symptoms such as mucus, slime, oily sheen, or discolored skin and gills in this region. The polluted ocean and water environments of the Niger Delta, which have been so poorly conserved, have become unproductive and unable to sustain aquatic life.

THE IMPACT OF FISH IMPORTATION IN NIGERIA

Of all flesh foods, fish is the most susceptible to tissue decomposition and microbial spoilage because they begin to deteriorate as soon as they leave the water. Therefore, a lot of imported fish are preserved by freezing and applying preservatives such as sodium tripolyphosphate (also known as Pentasodium Triphosphate or STPP) and sodium benzoate. These make fish and other seafood appear firmer, glossier, and smoother.

Although it is generally regarded as a safe product if used according to Good Manufacturing Practice (GMP), research by Ritz et al (2012) has revealed that STPP is a health risk as it may harm normal renal function in the body and worsen incidence of kidney diseases in humans. Since the release of this report, various health and food safety agencies have made calls for a careful consideration and public education of the health impacts of these preservatives.

Furthermore, in Nigeria, it has been reported severally that smugglers without an import license flood the market with contraband and compromised frozen fish through Nigeria’s porous land borders. An officer of the Nigeria Customs Service who spoke on the condition of anonymity stated that fish smuggling into Nigeria is quite common due to oversight, importers avoiding import duty fees and corruption of some custom officers. The Officer went on to say that most times, the smuggled fish may have been compromised such that they do not meet quality control standards in terms of production, storage, and quality. It may be that the fish were improperly stored, have passed storage time limits, or were stored with a counterfeit preservative like formalin. Drs. Ayinla, Olaifa and Oguguah all claimed knowledge of these smuggling practices affirming that a lot of imported fish being sold in the market were smuggled. Selling such unhealthy fish for public consumption exposes Nigerian consumers to potential health problems.

As mentioned earlier, most of the fish consumed in Nigeria is imported from foreign countries, reaching more than 2 million tonnes annually The FAO’s 2017 Country Brief on Nigeria stated that in 2013 total fish imports amounted to 1.2 billion dollars, a figure that Dr. Olaifa says increased to 1.4 billion dollars the following year. By importing such a massive amount of fish annually, Nigeria loses foreign exchange and continues to harm her economy. These losses also stunt the growth and development of trade in local fish industries.

“On the other hand,” continued Dr. Olaifa, “if this remarkable amount of money spent on importation could be channeled for internal trade within our local fish industry, it would bolster the industry’s efforts and generally boost our economy”.

So, can Nigeria still develop and maintain a vibrant fish production industry that will meet consumer demand?

Experts are hopeful, but only if the country endeavors to holistically develop all areas of fish production, including aquaculture, artisanal, and industrial (ocean) fisheries. Currently, said Dr. Ayinla, all efforts are being made to improve the fish industry, especially in aquaculture. He is optimistic that aquaculture will create the sustainability and food security needed for the fish industry while conserving ocean and other water resources.

“We have been promoting aquaculture – focusing on catfish and tilapia production for now – and we are making good progress and seeing the positive results already with improved food security, better nutrition, and creating jobs.” he said. “The ocean, rivers and other fishing mediums would also be able to recover from excess fishing and be conserved”. He also emphasized the need for enforcement of regulations and policies that would favor domestic fish production.

According to Dr. Olaifa, Nigeria has a huge potential to meet local fish demand through increased domestic fish production especially with the kind of resources we have on ground. “If these resources are well managed,” she said, “it will promote entrepreneurship, create employment opportunities, improve our economy and foreign exchange through contribution to GDP and ultimately reduce the need for fish importation”. 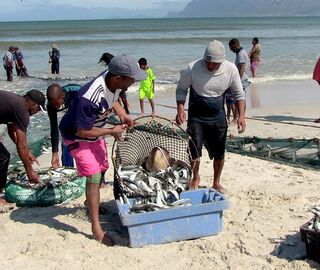 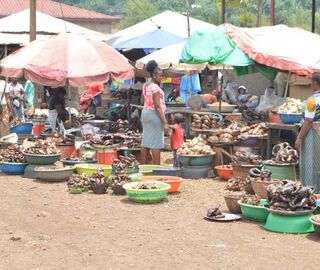 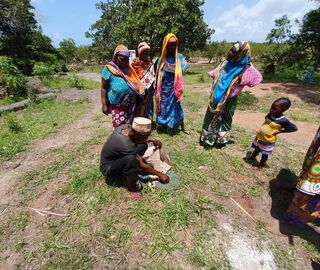