When the Ecuadorian government approved permits for an oil company to drill deep in Yasuni National Park—an area known as Block 31—it was on the condition that the company undertake a roadless design with helicopters doing the majority of the leg-work. However, a new report based on high-resolution satellite imagery has uncovered that the company in question, Petroamazonas, has flouted the agreement's conditions, building a massive access road, at least one permanent bridge, and cutting more forest than was permitted. The issue is particularly relevant since just last month Petroamazonas was awarded additional oil permits for Yasuni's much-embattled Ishpingo-Tambococha-Tiputinin (ITT) Block under the same seemingly roadless conditions.

"[Ecuador's] Environment Ministry needs to demand from Petroamazonas an explanation of how [and] why they just blatantly violated the terms of the Environmental Impact Study and license," co-author of the new report, Matt Finer with the Amazon Conservation Association, told mongabay.com.

In 2007, the government approved an Environmental Impact Study (EIS) based on this new roadless design, which included helicopters flying equipment in and out and a thin corridor through the forest for the oil pipeline, known as a "flowline corridor." At the time the permit was approved for a different oil company, Petrobras. Then in 2009, the concession was handed from Petrobras to Petroamazonas; but in taking over the concession, Petroamazonas also agreed to its conditions.

In 2007, the Ecuadorian government announced it would forgo drilling in ITT if the international community compensated it with $3.6 billion, or half the expected revenue from the oil drilling. Known as the Yasuni ITT-Initiative, it was billed as a way to mitigate climate change by leaving 846 million barrels of oil in the ground, preserve species, and safeguard indigenous groups who had chosen voluntary isolation. The initiative was controversial, however, with some conservationists seeing it as essentially holding the park to ransom, while many others viewed it as among the most innovative and promising initiatives in contemporary conservation. 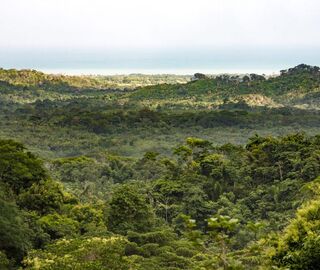