In the Cambodian floating village of Kampong Luong, residents' livelihoods depend on making prahok, a type of fermented fish. With fish catch decreasing, the tradition is at risk.

Due to natural cycles, November to January is a time when Cambodia is rich in fish, therefore many Cambodians like to make prahok from this abundance to reduce waste and keep it as a food reserve in case of a shortage. A type of fermented fish, Prahok is found throughout Cambodia, especially in areas adjacent to water sources such as the Mekong River and the Tonle Sap Lake.

The largest freshwater lake in Southeast Asia, the Tonle Sap is the heart of Cambodia’s society, economy, culture and environment. Spread over 120 km, the lake is an important water source and is the location of the largest fish migration in the world when fish move between the Mekong River and the Tonle Sap.

Of the five provinces bordering the Tonle Sap, Pursat is one of the most western and is home to the Kampong Luong floating village.

159 km from Phnom Penh near the Krakor district of Pursat, the on-location portion of our floating village episode of Cambodian Eats! was unfortunately cancelled due to interprovincial travel restrictions stemming from a surge in Covid-19 cases. But that doesn’t mean I didn’t have the chance to learn about prahok and the ways of the people living in this river community.

Just 7 kilometers from Pursat’s Krakor district, the view of the village is full of houses floating on the vastness of the Tonle Sap Lake. The community is made up of more than 1,300 families, including Cambodians, Vietnamese, Cham and Chinese all living together and practicing different occupations, from trading in goods to fishing and netting.

Having the advantage of living so close to the biggest source of freshwater fish, where boat ride services are available to take visitors to observe daily life in this floating village,  Kampong Luong provides the perfect opportunity to learn about the process of making Cambodian prahok.

With such abundant fish from the Tonle Sap, prahok production has become one of the main occupations for many of the people living in the floating village and, for Mrs. Soeng Siem, it is her primary source of income.

Introduced to me by Mr Bunthoeun who owns a boat rental business in the community, at 63 Mrs. Soeng Siem is a person who knows how to make prahok skillfully and has been running her business for more than 10 years.

A single mother, Mrs. Soeng Siem lives in a house on a boat in the Kampong Luong floating village with her only daughter and, facing hardships, she turned to prahok as a source of income to support her family.

Talking on the phone,  Mrs Soeng Siem explained that her family produces two types of prahok, boneless and bony prahok.

She also told me about the methods that she uses to produce the dish. According to Mrs. Soeng Siem, for the bony prahok, first she buys fish from the fisherman, then she has to clean the fish and keep it until the meat swells before marinating it with salt.

After marinating the first time, she added that she must drain all the water from the fish, dry it in the sun, and marinate it with salt again to be put into prepared jars. The longer it is stored, the more fragrant and delicious it will be.

For the boneless prahok, she said that the preparation is not very different from the bony version, she just has to remove the bones after the meat is swollen.

Prahok is most popularly used by Cambodians as a primary ingredient for cooking and, according to the Food in Khmer Society book by Rei Yum institute, Prahok Dott, Prahok Korb and Prahok dott ler Jrunh all use this fermented fish as the main ingredient.

Apart from being an essential ingredient, prahok is also used as an additive in many other dishes to create unique flavors, including Nom banh chok or Khmer noodles, Tuek kroeung, Samlor m’chu kroeung.

After telling me how to make prahok,  Mrs. Soeng Siem shared with me the problems that she encountered this past year.

“Last year, I cut 200 to 300 kilograms of fish with my daughter,” she said. “But this year I got only 80 kilograms because fishermen found less fish too.”

Hearing Mrs. Soeng Siem describe her problems and the situation facing fishermen made me curious about the cause of this problem. Therefore, I asked Mr. Bunthouen, who guided me to Mrs. Soeng Siem, to arrange contact with a local fisherman.

Mr. Thoeun Ry, a 37-year-old fisherman who has been in the business for almost 10 years in Kampong Loung also complained about the scarcity of fish.

“Last year, the water was down too much which made the fish lose,” he told me through a phone conversation.

Drought in the Tonle Sap Lake has continued for more than 20 years. The water level of the Mekong River decreases which greatly affects Tonle Sap Lake and the people living along the area.

According to the Mekong River Commission report in 2020, the low inflow from the Mekong river and tributaries in the early wet season of 2020 resulted in a very critical situation for the Tonle Sap Lake.

In addition to the declining water levels, overfishing is another problem that Mr. Thoeun Ry encountered. He said that the current number of fishing grounds has increased due to the population living in floating villages steadily increasing.

Beside the population growth, Mr. Thoeun Ry also said some large scale fishing operations have contributed to why his fishing is less productive. Excessive fishing not only adversely affects the livelihoods of some fishermen living alongside Tonle Sap region, but it also affects the ecology of the Tonle Sap Lake.

To further investigate the problems raised by Mr. Thoeun Ry, I continued my journey to find the root cause with the help of Mr. Keo Sovannareth, commune chief and local community leader. He has observed the growing scarcity of fish in the area and believes that it is due to a combination of circumstances.

“There are two factors. First the change in nature, the level water of the river is changing regarding the natural issue,” he explained. “The second one is the human factor, as fish is declining and peoples’ fishing is increasing.”

He added that if this problem persists for the next five years, human migration could become another challenge for the floating community. Currently, there is already a small minority of people who have left to work in other places including Phnom Penh, due to declining fisheries.

“In general, people who are living on the water, not only in my village, they usually depend on the fish,” he said. “However, when the fish are declining, the people’s livelihood will also meet the difficulty.”

Wanting to know possible solutions to these problems, I contacted Wonders of the Mekong, a major project that aims to improve understanding, appreciation, and the capacity to manage a functional and healthy Mekong River for fish, wildlife, and people.

Mr. Chut Chheana, Communication Coordinator of the Wonders of the Mekong who has conducted numerous studies on water issues in Cambodia and is the author of publications dedicated to fish life cycles, explained that the Tonle Sap receives water from the Mekong river, which flows from various mountainous areas in Laos, Stung Sen, and Stung Sangke. He explained that the water level in the Tonle Sap rises and falls depending on all those sources as well as larger ecological factors.

“In these last few years, first due to the environmental impact of the El Niño storm, there has been a significant impact on the water supply. Also there is less water flow from Tibet, and rainfall in Laos which has to flow into the Mekong River also decreased,” he explained.

Although Wonders of the Mekong does not have a strong enough influence to single handedly solve the problem, the group produces short videos and does research to spread the message to the general public about these effects and how they can help take care of their environment.

Mr. Chhut Chheana also explained the importance of young people’s participation, “Nowadays, I have another youth group called Young Eco Ambassador. They joined as a part in advertising with the youth.”

He added that if there is access for young people in the provinces and in the region to get involved it will be even better.

This story was produced with the support of the Earth Journalism Network. It was originally published on Focus Cambodia as part of their Cambodian Eats! series, funded by EJN's Asia-Pacific project, which seeks to explore how climate change and other environmental challenges are altering diets and food in Cambodia. This story has been lightly edited for length and clarity.

In this short behind-the-scenes video, the young journalists who worked on the Cambodian Eats! series relate their experience of navigating Covid-19 travel restrictions and share what the project meant to them. 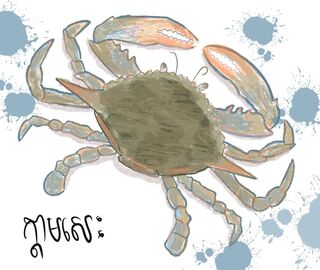