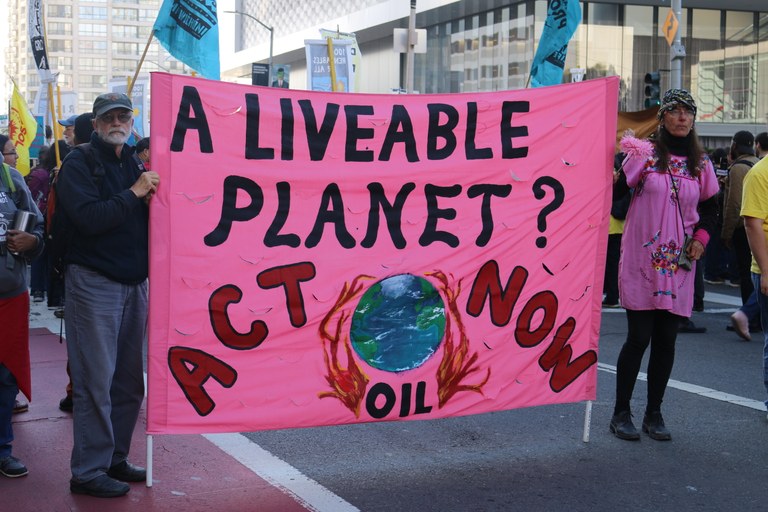 The executive director of Oxfam International, Winnie Byanyima, urged people across the globe to come together in a show of "people power" to compel their governments to take action against climate change, marking the start of a major global summit this week.

“Climate change is a political issue," Byanyima said at the Global Climate Action Summit in San Francisco, California. "It is an issue of people power. We need people power. That is why we were so excited by the marches."

The summit attracted thousands of environmental advocates, scientists, business leaders and politicians, among others, seeking to tackle the challenges posed by climate change. Their goal was to move beyond pledges made by national governments and take actionable steps toward curbing rising temperatures.

The protesters who gathered outside the conference venue were denouncing what they said was US government inaction on addressing environmental issues. Last year, US President Donald Trump announced that the United States was withdrawing from the Paris Agreement on climate change mitigation, saying it undermined the US economy.

The agreement sets out action plans to be taken by governments and other actors to address climate change by limiting global warming to well below two degrees Celcius.

In addition to calling for action from individuals, Byanyima called for an end to the use of coal across the globe.

“There shouldn’t be another coal plant installed in the world today, and the existing ones should be scaled down as fast as possible,” she said.

The summit drew a fair share of celebrities, including actor Harrison Ford, who delivered a message alongside Byanyima.

San Francisco Mayor London Breed, who also took to the stage at the summit, called for concrete efforts to address the climate-change challenge.

Actions such as banning the use of single use plastic bags matter a lot in decarbonising the world, she said.

The summit comes about two years before the 2020 deadline for carbon emissions across the world to peak if the world is to be saved from the worst effects of climate change.

Despite the challenges, it's a goal that can be achieved, said Christiana Figueres, the former executive secretary of United Nations Framework Convention on Climate Change.

“Countries are able to peak their emissions by 2020,” said Figueres, who is now the convener of Mission 2020, a global initiative that seeks to ensure the world bends the curve on greenhouse gas emissions by 2020. "Fifty-three countries will be able to peak their emissions,” she added, giving hope that if more action is taken the world could still be saved.