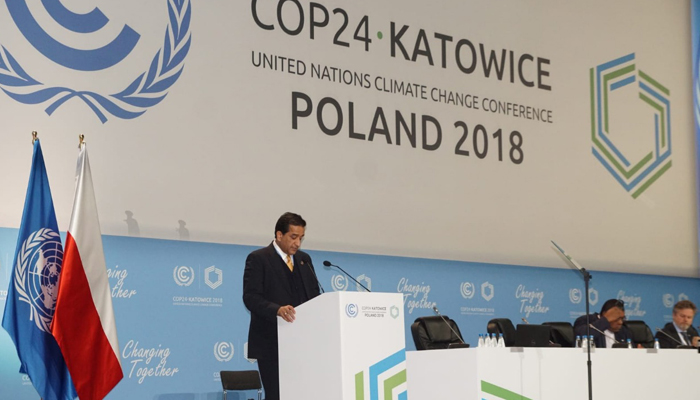 Aslam’s comments during an address at the ongoing summit of the United Nations Framework Convention on Climate Change (COP24) in Katowice, Poland.

Pakistan ranks 135th in terms of its contribution to global emissions, yet it has been among the top 10 vulnerable countries consistently over the past two decades. The NDC is a binding action plan to control greenhouse gas emissions and adapt to climate change impacts. Countries voluntarily committed to them under the Paris Agreement in 2015.

For Pakistan, Aslam said, climate change is neither fake news nor a convoluted conspiracy. It is a stark reality. “It stares us in the face every day as we are forced to cope with recurring super floods, unpredicted droughts, chaotic heat waves, melting glaciers, as well as rapidly shifting weather patterns.”

In the past four decades, 90 per cent of the natural disasters in the country have been triggered by climate change, he added. “Climate change, today, is adding almost eight per cent of forced costs to our GDP.”

According to the Global Climate Risk Index 2019, between 1998 to 2017, over 10,000 people have died in Pakistan due to climate change impacts and it has lost upwards of $3,826 million. In 2017 alone, 262 fatalities were reported. “That Pakistan has a share of less than one per cent in global emissions underscores the unfairness that also becomes apparent,” states the report.

Under the NDC, some of the pledges Pakistan has made include rapid development of hydropower resources, mass transit systems in large cities, afforestation and reforestation and increase in capacity of existing large water reservoirs and dams.

One solution, identified by the minister, was low carbon economy. “Pakistan has planted a billion trees to not only meet its pledge of restoring 3.48 million hectares of forest but has today significantly enhanced it by restoring over six million hectares of forest.” The project, according to Aslam, created half a million jobs, revived forest biodiversity, engaged the indigenous communities and energised the youth.

“Pakistan has so far spent more than $120 million on the green growth plan and will spend another estimated $1 billion through domestic resources. In addition, Pakistan has finalised a multimillion dollar zero-emission bus and metro system for the city of Karachi, which will operate on cattle waste generated biogas.”

However, he complained that the Green Climate Fund, set up under the UN to help fund climate-resilient development, has not delivered so far, making it difficult for Pakistan to meet its targets. “The Fund needs more financing and its efficiency should be further enhanced to deliver faster and easier financing for climate mitigation projects.”