Factories in and around Panipat in Haryana are pumping a huge amount of waste, including ammonia, into the Yamuna upstream of Delhi 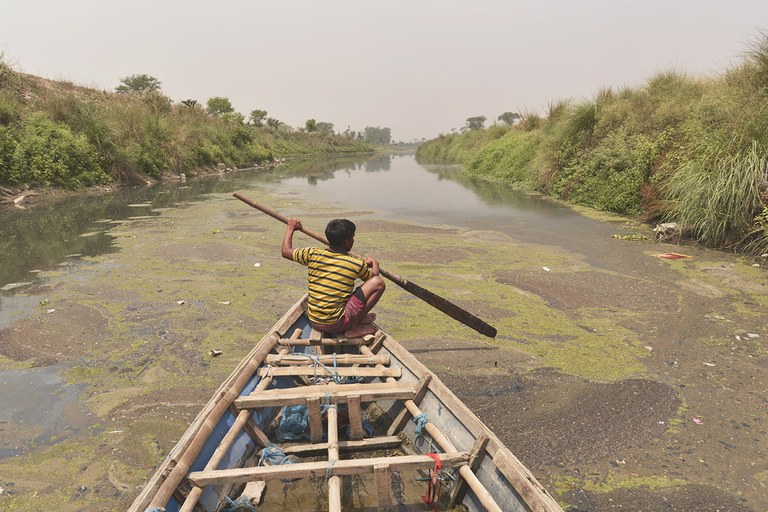 The untreated effluents, especially from textile dyeing units, that Drain Number 2 carries from Panipat to the Yamuna upstream of Delhi [Image by Dilip Banerjee]

Every now and then, you see a small report in New Delhi newspapers — one of the city’s water treatment plants has been shut down because the ammonia load in the Yamuna is too high. For residents constantly on the edge of water scarcity anyway, it means another 2-3 days of dry taps.

It was particularly bad on February 29 this year when Delhi had to shut down its two main water treatment plants – Wazirabad and Chandrawal. These two plants supply 234 million gallons daily (MGD) to the city – over a quarter of the 900 MGD consumed by the 19 million people who live in India’s capital.

On that day, the  ammonia level in Yamuna water had touched 2.6 parts per million (ppm), more than five times the prescribed safe limit of 0.5. Just a month before that, the levels had been fluctuating between 0.62 and 1.4 ppm. Ammonia spikes had been recorded in September, October and November last year as well. Unless controlled, it can ruin the new Yamuna Turnaround Plan prepared by the Delhi government.

At these levels, ammonia is not directly toxic to humans. But it reacts with the chlorine that is used to detoxify water in treatment plants. And that reaction forms cancer causing chemicals such as trihalomethane and chloramines as by-products. This means when the ammonia load is high, you cannot add chlorine to the water. So you cannot clean the water of other impurities, and have to shut the plant down.

Delhi has been facing this problem for over 20 years, Kapil Mishra, Delhi’s water minister and chairman of Delhi Jal Board (DJB) — the agency responsible for water distribution — told thethirdpole.net.

So where is this ammonia coming from? According to officials in India’s water ministry and in DJB, much of it is released by factories in Panipat district of Haryana, around 85 km upstream. There are laws against releasing untreated industrial effluents from a factory, but these factories break the law all the time.

Mishra told thethirdpole.net that other remedial measures have been taken to ensure that water treatment plants don’t get shut down due to the recurring ammonia problem. “For the past two months Delhi has stopped drawing raw water from the main river. Instead, it is getting its water from a channel which bypasses the river in Haryana before it becomes polluted. We have also installed an ammonia neutralisation plant which can treat water containing up to 2 ppm of ammonia. Now the complete shutdown of plants won’t be required.”

That channel is the Munak canal, which was blocked and damaged by agitators this February, so the vulnerability remains.

Before the ammonia treatment plant was installed, DJB cleaned the water of ammonia with chlorine, but that process can only handle a concentration of up to 1 ppm.

“We also did not have standards and monitoring mechanism in place to measure the concentration of by-products. Then the minister set up an expert committee and finally after all these years it was decided that the by-products will be monitored as well,” said Sanjay Sharma, a technical expert from DJB.

No clean paani at Panipat

Delhi may have solved its ammonia problem to some extent, but there is no respite for the people living immediately downstream of the factories. Panipat is a town steeped in history, famous for its textiles and carpet industry. Thousands of dyeing units have cropped up. They release an untreated toxic cocktail of chemicals into drains. Tanneries and fertiliser plants as well as agriculture runoff add to the problem, as do domestic sewage. And the drains carry these untreated effluents to the Yamuna.

People living along these drains are the worst sufferers. At Shimla Gujran village of Panipat district, around 2,000 people live along Drain Number 2. Step into the village and a crowd gathers to narrate water woes. Behind them the drain emits a stench that makes it difficult to stand there, even with mouth and nose covered. The water flows slowly in a dark sludge. Aquifers are contaminated as the sludge seeps underground. There is no source of safe drinking water.

Jagmendra Sanno, a 43-year-old resident, told thethirdpole.net, “The water used to be blue earlier. We used to drink and bathe from water from this drain but for the last 12 years the drain has become severely polluted.  Now we cannot even touch the water. Even cattle fall sick if they bathe in this. We don’t use hand pumps anymore because the water is too dirty, dark and smelly. Our utensils turn yellow. We are now extracting water using submersible pumps at a depth of 280 feet and manage to fill one tank but that’s not sufficient to cater to the entire village.” On top of that, the district suffers from a major power shortage and so the water pump runs only for a few hours a day.

Local doctor Vikas Sharma told thethirdpole.net, “Every household has someone suffering from kidney stones. People are going bald at a much younger age. They are losing teeth at the age of 40. And many suffer from skin rashes and allergies.” 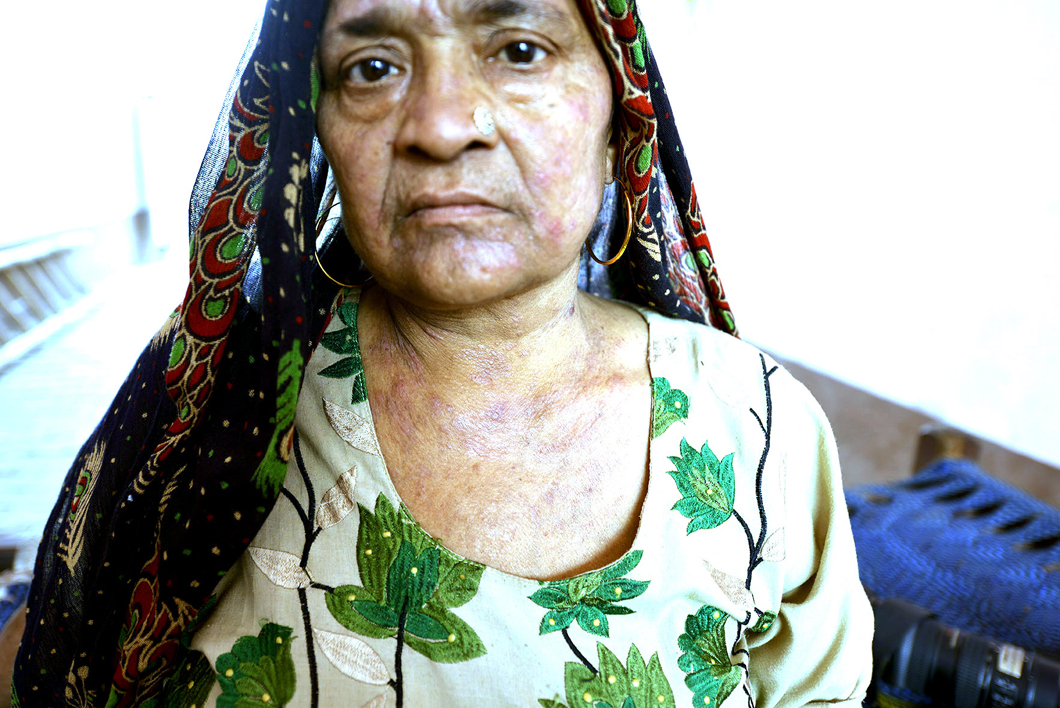 According to water activist Bhim Singh Rawat from the South Asia Network on Dams, Rivers and People, “The problem is that just upstream of Shimla Gujran, Drain Number 1 that carries a toxic concoction of industrial effluents from dyeing units and chemical industries merges with Drain Number 2, destroying its water quality.  Later on, the contaminated Drain Number 2 merges with the main river Yamuna that flows downstream to Delhi.”

At Sewah village in Panipat district, situated along Drain number 1, the government is building a plant to treat 90 million litres of sewage a day. But well before its inauguration, the plant is repeatedly breaking down during trial runs.

“This treatment plant is meant only for domestic sewage. But often the entire water turns red and then we know that industrial waste has entered the plant through the drain,” said a technician at the site. There is nothing they can do to treat industrial waste.

SP Verma, regional officer of the Haryana Pollution Control Board in Panipat, denied the presence of industrial effluents in the drains. “An effluent treatment plant has been set up for the industries and all the dyeing units are treating their waste before releasing it in drains,” he said.

Despite this claim, thethirdpole.net observed a dyeing unit operating along Drain Number 1 without any treatment plant.  The water in the drain was full of froth and smelt strongly of chemicals. 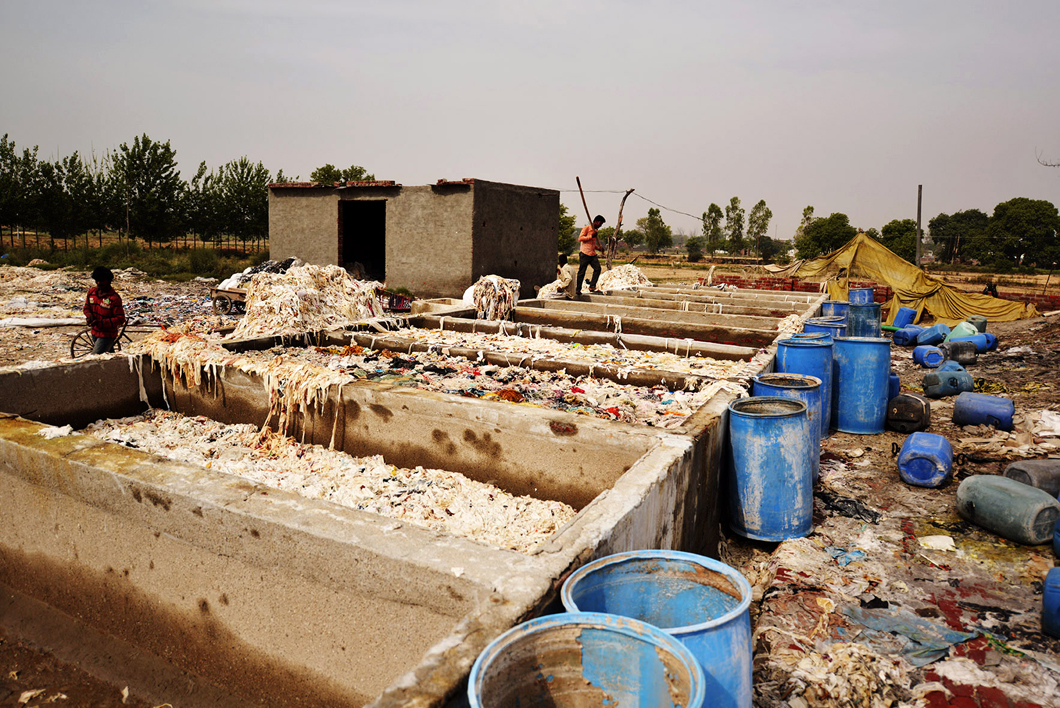 During the ammonia crisis in Delhi, on February 29, Mishra had said, “At the Panipat drain [Drain Number 1], ammonia levels were recorded at 56 ppm (nearly 100 times the safe limit).”

There are fishermen at the point Drain Number 2 enters the Yamuna, and they know that industrial pollutants are taking away their catch. Chandilal, who has been fishing for the last 20 years, told thethirdpole.net, “Whenever industries release chemicals, fish get killed here. Earlier we used to see species like Catla and Roi but now they have become very rare.”

In terms of water pollution, Panipat has been officially identified as one of the 47 most critically polluted industrial clusters in India. According to a 2009 report of the Central Pollution Control Board, over 2,000 dyeing units have been asked to shift to another location that is connected to a common effluent treatment plant. However there is no information on how many have actually been shifted. Among the local officialdom, there does not seem to be any sense of urgency.