Part 2: Romancing storms, worms and leaves; growing tobacco in the shadow of environmental perils in the Philippines

Part 2: Romancing storms, worms and leaves; growing tobacco in the shadow of environmental perils in the Philippines

As prices for native batek tobacco have increased, more farmers in the southern Philippines have begun growing the controversial crop. Part 2 of a three-part series on the commodity's environmental impact.

ALUBIJID, Misamis Oriental–While Villaestique moves in rhythm with the rains, Roxas’ daughter, Arlene Django, on the other hand, romances the worms that produce the sacks of vermicast she uses as main fertilizer and soil conditioner for her two-hectare tobacco farm. 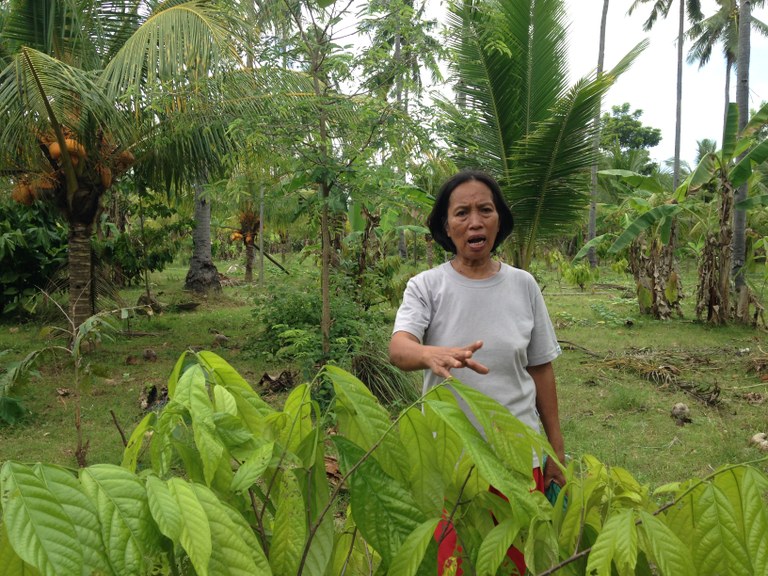 “This kind of work with the worms, and farming tobacco, are not for the indolent,’’ she says as she explains the mindful intricacies of preparing the worm’s meals of fruit rinds, rotten leaves, eggshells and fishbones that in turn become, after a month of frenzied feeding, the worm’s nutrient-rich excreta. She sells the surplus to other farmers in the village at P250/bag, several times cheaper than the synthetic fertilizers sold at P1,500 in agricultural supply stores in town.

The town leadership more than a decade ago, as early as 2006, had the foresight to envision environmental management strategies for its communities that included the introduction of organic farming methods for all crops for this largely agricultural town, where residents grow rice, corn, coconuts and other cash crops like bananas, coffee and tobacco on 4,366 hectares, 42 percent of its land area.

In its Comprehensive Development Plan 2010-2018, Alubijid leaders had recognized the environmental impacts of the “rampant use of fertilizers and pesticides.’’

“Farmers still use chemical pesticides and insecticides in growing rice and corn. Heavy use of chemical fertilizers and pesticides is quite rampant in commercial farming of pineapple, papaya and tobacco. If left unchecked , this could lead to acidic soil conditions. Acidic conditions result in low soil fertility.’’

Among its strategies was intensive trainings on permaculture and composting that were conducted through women’s cooperatives.

Thus, through those permaculture trainings, Django, Roxas and Villaestique and hundreds of other farmers became organic fertilizer converts.

But according to Django and Villaestique, inorganic fertilizer is still used but this has been minimized considerably.

Despite the reduction, the amount of fertilizer is ten times more than what they used three decades ago, the farmers said.

“I still remember as a teenager, my father taught me how to place fertilizer around a week-old plant, measuring it using a whiskey bottlecap, two bottlecaps per plant. Now, to get green leaves, I use a salmonan, (a 250-mg sardine tin can), to measure fertilizer for each plant,’’ says Villaestique.

However, other farmers like Melona Acusar in the adjacent municipality of Laguindingan and Daniela Baconga in Gitagum farther west, still refuse to use organic fertilizers. And they are not alone as most farmers in these other towns use largely commercial fertilizers, largely a mix of nitrogen, phosphorus and potassium, for their tobacco farms.

Judith Bacadon from the nearby village of Lagtang, swears that it helps to let the land lie fallow for a year to regain its fertility and kill fungi by applying cupric hydroxide.  Most farmer however use the land continuously to cash in on tobacco’s profitability.

Roxas also suggested to grow peanuts or legumes like munggo instead of corn, by October, shortly after using the land to grow tobacco. “It is even better if you no longer harvest the beans and instead plow the dying plants into the soil. It really works. The soil is enriched once again,’’ she said.

But in Malaybalay, Bukidnon, more than 100 km away northeastward from here, Datu Makadingding of the Higaonon, an indigenous people of Bukidnon, Misamis Oriental and Agusan provinces, frowns upon such persevering efforts to make and use organic fertilizer in the cultivation of tobacco.

As a thoroughbred organic farmer growing a variety of crops including peanuts, corn, fruit trees and herbs in the family-owned Umanika Eco-Cultural Farm, the chief sees it as oxymoronic.

“Organic farming is systemic, in fact, it also is a lifestyle. What they (tobacco farmers) are doing is substitution farming. Substitute inorganic with organic. That’s not the real thing.  Besides, tobacco is by itself poison as it contains nicotine. That’s why I do not allow anyone to smoke inside our farm premises because smoking is against our principles of sustainable farming and healthy living.’’

The naturally occurring nicotine is an active ingredient in tobacco leaves that is sometimes used also as pesticide. The chemical is listed as a highly hazardous, particularly if inhaled, by Hamburg-based Pesticides Action Network International and the World Health Organization.

According to him, tobacco monoculture depletes the soil of nutrients like nitrogen because tobacco is a nitrogen-hungry plant. “The farmer is after the leaves and to grow lots of green and big leaves you need lots of nitrogen. That’s why they still need inorganic fertilizers.”

On the other hand, the farmers had also cultivated the habit of growing native trees like gmelina, mahogany and endemic species like mantangale and narra though they are not obliged to do so by the local government. This because they had learned in learning sessions with farm technicians the importance of growing trees. They are rain catchers, says Django.

In Alubijid, reforestation is taken a notch higher by calling the strategy tree-growing, not just tree-planting, meaning these trees are cared for till they mature.

Barry Balacuit, the municipal environment and natural resources officer, reports that in the past three years, 8,525 trees, including endemic narra and mantangale, and mahogany had been grown in protected areas like Mt. Sulumayagon, where the headwaters of the Alubijid River begin.

Tobacco farmers in Misamis Oriental, like the mother-daughter team of Roxas and Django, are not required to grow trees even the WHO FCTC data show that worldwide tobacco production is considered to contribute significantly to deforestation, particularly in the Philippines, Malawi and Zimbabwe.

Forests here were cleared to make way for farmland early in the last century. But present batek native tobacco production, however, may contribute less to deforestation because unlike the Virginia variety, these leaves are neither fire- nor flue-cured, and so there is no need for wood as curing fuel. Still, Balacuit said that timberlands had been poached for swidden farming but tobacco is not grown in them, and remaining trees are felled for firewood and lumber as anti-logging laws are poorly enforced.

The Philippine’s 2018 country implementation report to the Framework Convention of Tobacco Control cites that P34.77- million had been used to plant 3,892,800 trees in 1,622 hectares that involved 1,422 tobacco farmers. Reforestation activities occurred in the Ilocos Region in Luzon, where 67 per cent of the country’s fire- and flue-cured tobacco is produced.

Aside from the two-three hectares of tobacco fields, Ubalda and her offspring Arlene Django plant coconuts, cacao, rice, corn, fruit trees and vegetables in the rest of the 10-hectare land. In Arlene’s farm, dwarf coconut trees jostle with fruit trees like tamarind, papaya, jackfruit, bananas, and the ample crawl space below the trees teem with squash, lemongrass, pineapples, eggplants, pepper. Along its border fences are stands of moringa. Django said that lemongrass and moringa have ceased to be just for food alone. A vegetable market vendor regularly comes to harvest the leaves herself and pays her cash.

“We have to plant other crops so that in case tobacco fails, my family does not go hungry,’’ she says.

Diversification is possible for Django because she has a fairly large landholding. But most in the community only have much smaller plots for cultivation.

Lawyer Albin Labis, Alubijid town mayor, echoes the same refrain. “We encourage farmers to diversify, to plant crops other than tobacco. For food security and to keep the soil fertile.’’ From the point of view of a local executive, diversification is the key as a viable and socially acceptable step to a gradual switch to other crops.

Reporting for this story was supported with funding from Internews’ Earth Journalism Network and the South East Asia Press Alliance.