Young women in this part of Vietnam are pursuing husbands abroad, betting on economic security over love. Meanwhile, young men to struggle to find partners among the women who remain. This is Part 3 of the Mekong Eye’s three-part investigation into how people in the Mekong Delta are adapting to climate change by leaving.

A decade ago when Nguyen Thi Kim Oanh and her sister began hearing stories of new-era matchmakers uniting would-be Vietnamese brides with South Korean bachelors, they decided to take the plunge.

“My family is poor. I heard how daughters could support their parents by marrying male foreigners," said Oanh. “Ten years ago, as more storms and heavier rains began creating difficulties for selling my fishing nets and growing chilies, I had little money to help my ill parents.” 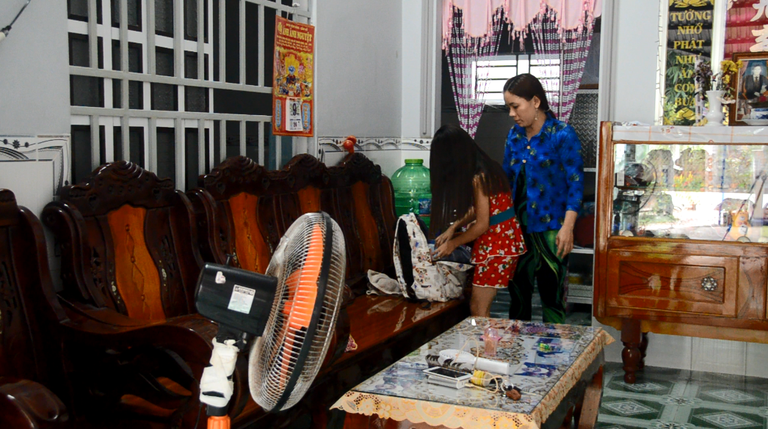 One year after Oanh signed the marriage certificate, her application for South Korean residency was approved and she left her rural upbringing to join the growing ranks of cross-border brides.

Getting married and running away

The Ministry of Police reports that from 2008 – 2014, about 83,000 women married foreign men, mostly from Taiwan, South Korea, China and the United States. The women were generally born into poor families from either the Mekong Delta or Northern provinces and had low levels of formal education and limited work skills.

Poverty has long been a way of life in the Mekong Delta, in no small part due to its exposure to natural disasters. But now climate change is making things much worse, says Assistant Professor Dr. Le Anh Tuan, Deputy Director of the Research Institute for Climate Change at Can Tho University. Among the numerous signs of cliamte change he has observed in the Mekong Delta are increased summer temperatures, abnormal rainfall distribution and flooding, sea-level rise in coastal areas, abnormal river flows, more frequent and longer droughts, salt water intrusion into agricultural land and river and coastal erosion.

“It is very hard to survive in these rural areas," said Dr. Tuan. "Even with a good harvest, it is not easy to sell goods. With a bad harvest, farmers lose everything.

“It’s become extremely difficult to work in the agriculture sector, which is why there’s even less motivation now to pursue it,” he added. 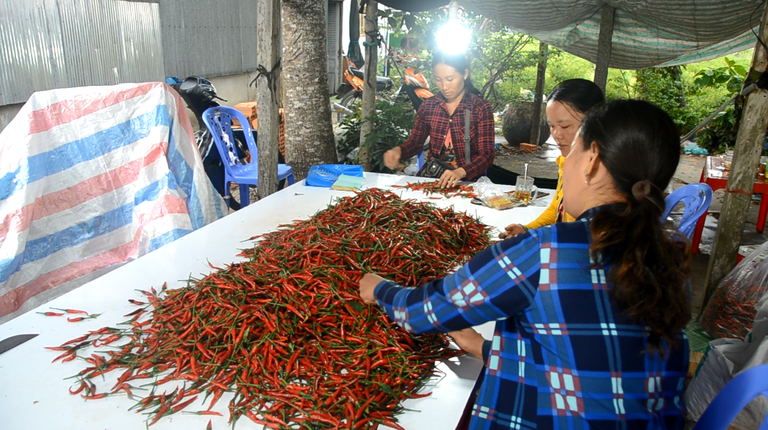 Cross-border marriage is increasingly considered an economic alternative. But not all brides feel lucky in the end, as Oanh and her sister discovered.

Differences in culture, language and lifestyle left them feeling like strangers in their marriages. The inability to communicate with their husbands or their in-laws was a nightmare, they say, even after having children.

“We are a couple without any agreement or compassion. My husband follows his family’s words from small things to important decisions. When I object, I’m beaten,” Oanh says.

After five years in Korea, both she and her sister secretly plotted their return home with their children. They returned in 2012 but have struggled to find stable work, picking up casual jobs making fishing nets, working as hired field laborers and picking chilies. Though they are still poor, they’re far more comfortable back home, Oanh says.

Local media reports that one in five marriages of Can Tho City women to South Korean men end in divorce.

“Legal separations generally occur within the first few years of marriage, with three out of four divorces beginning when the women are still young, 15-24 years of age,” says Dr. Tran Thi Phung Ha from Can Tho University.

The dark side of international marriage

Dr. Ha says that when Vietnamese brides take the children fathered through these cross-border marriages back home, they face a range of unexpected challenges.

First, women fail to acknowledge the significance of maintaining foreign citizenship for their children since citizenship remains tied to their fathers. Vietnamese relatives do help obtain local birth certificates for these children enabling them to enroll in schools, but they often forget to keep their foreign citizenship papers up to date. 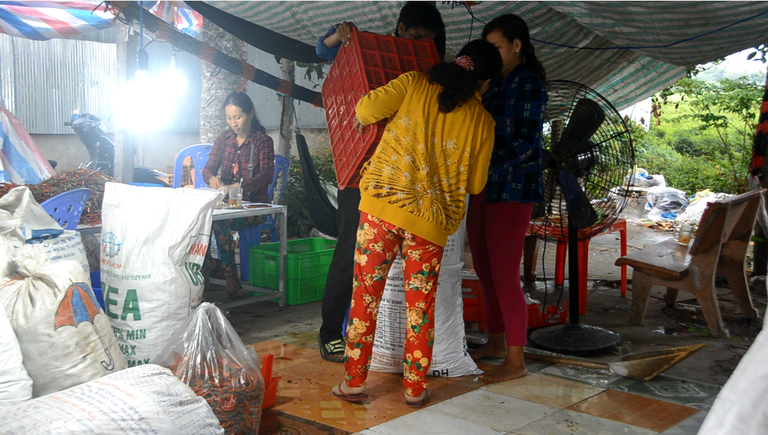 With limited economic opportunities in the Mekong Delta, women there seek foreign husbands as a quick way to get out of poverty / Credit: Tran Thuy Binh

“Their families tend to ignore these [children’s] passports. To extend them, they should go to Can Tho city. It takes time and there are fees that many people can’t afford. Furthermore, they do not intend to fly back and that’s why they do not extend them,” Dr.  Ha says. “These kids are foreigners living in Vietnam with their expired passports. It is illegal.”

Secondly, Vietnamese wives like Oanh and her sister often run away from their husbands without a divorce and are not legally separated. That makes it hard for them to remarry. Consequently, any children that may come with a new partner are not legally recognized as common children between them.

And often mixed-race children are without legal papers as their mothers did not obtain a proper marriage certificate.

“It is a type of cheating marriage”, says Dr. Ha. “They migrated to live with their foreign husbands but without any documents. Then they were beaten, and their children don’t have any birth certificates and passports.”

Addressing these challenges has become a key part of the support provided by the Can Tho Women’s Association, says its deputy chairwoman, Ms. Le Thi Thuy Hang. The association provides both legal and financial services relating to international marriages, helps obtain birth certificates for mixed-race children, and has even built several houses for poor mothers.

For those women who do remain abroad and send money home, parents find it bittersweet says Dr. Le Anh Tuan.

“I saw a lot of new houses in my field visits. Their owners said that their daughters remitted their savings after migrating with their foreign husbands. After talking with them for a long time, they cried and confessed that they missed their daughters and grandchildren because they seldom see them. Even when they do visit their grandchildren, they do not understand their language,” Dr. Tuan says. 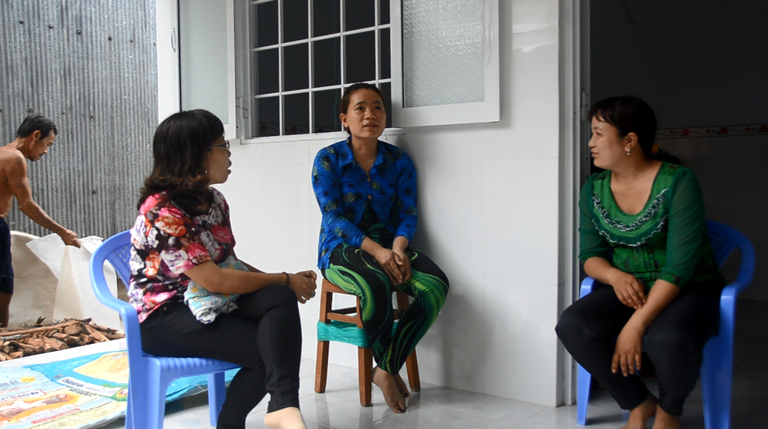 Kim Oanh continues to receive moral and occupational support from a women’s association as she resettles back in Vietnam following her failed marriage in Korea / Credit: Tran thuy Binh

Who is going to marry me?

Pham Van Vang, a 20-year-old man from the Mekong Delta, has had doubts about marriage.

“I’d like to get married, but I am poor and not exceedingly charming,” Vang laments while he waits for a ferry to cross Quan Chanh Bo canal.

His family has been farming shrimp in Tra Vinh province in the Mekong Delta, but their farm near Quan Chanh Bo canal is falling victim to riverbank erosion. “Our 1.5 hectares has been reduced to 1.2 ha and continues to shrink,” he says.

Like so many others in the Mekong Delta struggling against the mounting impacts of climate change, his family’s income has dropped such that Pham Van Vang and three of his brothers were unable to pursue higher education. They migrated to Ho Chi Minh City for work. “I earn about US$4.5 per day if I work as a truck driver or a mechanic,” he explains.

Vang is one of millions of Vietnamese men struggling to find a female partner due in part to a widening gender imbalance exacerbated in the Mekong Delta in recent years by women looking to improve their fortunes by marrying men elsewhere.

In the Mekong Delta, the imbalance is even greater, reported in 2016 to be 114 boys for every 100 girls. Moreover, the Mekong Delta’s birth rate of 1.84 children per woman is below the replacement rate.

So as poverty and climate change push more young women abroad and young men like Vang also seek jobs and marriage elsewhere, the demographics of the Mekong Delta are being pushed further out of balance.