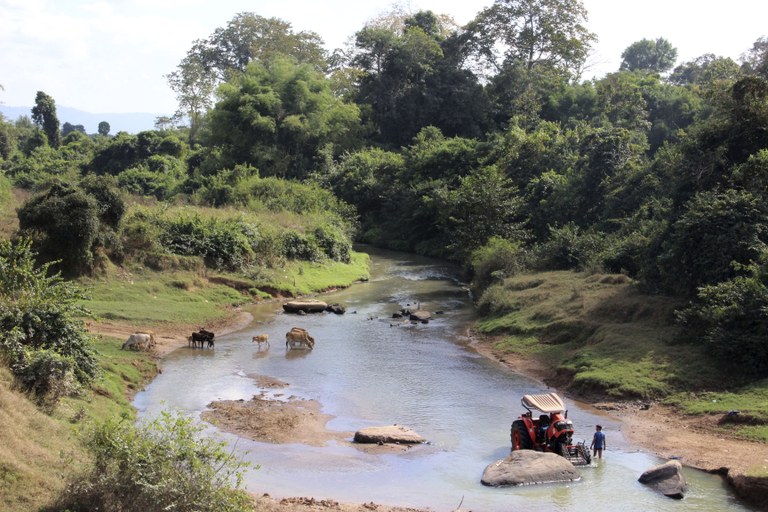 The people of Kua village in Sangthong district depend on the Ton River for their livelihoods. It is a prime source of food for the community and provides fishermen an income. It is a source of drinking water for the many diverse animals that live in the area. Locals use the water from the river on a daily basis for drinking, bathing and washing.

Villagers say the number of fish and aquatic life in the Ton River has been on the decline ever since the Chinese-owned Yongzhen Import-Export Production Promotion Company started planting bananas there in 2014.

Thongvanh, a 70-year-old resident, said that while the main source of livelihood for more than 300 families in Kua village is through agriculture and livestock, fishing brings in extra money.

Mr. Thongvanh and his wife sat in a grass-roofed hut in front of their house. It was a hot day and he took off his T-shirt while speaking with reporters.

“I could catch a lot of fish before the banana plantations started. I would catch it for our daily meals and also to sell,” he recalled.

Mr. Thongvanh, who lives a stone’s throw from the river, said before the arrival of the banana plantation in 2014, the Ton River was a food source for the community. The river was abundant in aquatic life. He grew rice on his farm and caught fish to supplement his income. 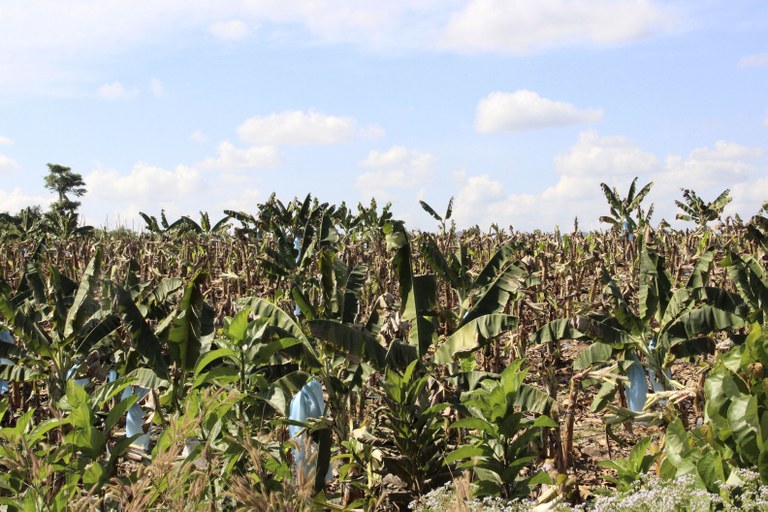 Every year the Chinese-owned company, which also grows sweet corn and other crops, employs laborers to work on its 160 hectares of plantations for weeding, planting and watering duties. Villagers said they are hired only when it is time to sow new trees. For much of the year there isn’t work from the company. Even though the banana plantation creates an important job avenue, it is short-term employment.

In November 2018, 300 kilograms of fish were found floating dead in the vicinity. Chemical leaks from the plantation into the river has been blamed for this environmental catastrophe. 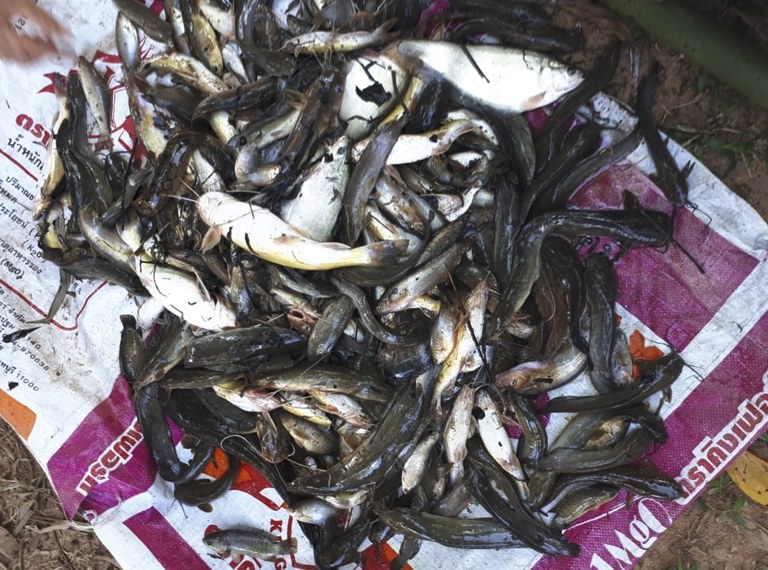 Catfish, perch and scaled fish that were found dead in the Ton River, Sangthong district, in November 2018 / Credit: Courtesy of Chansamone/Vientiane Times

“Since I was born I have never seen fish die due to chemical residue being leaked from the banana plantations,” said Mr. Thongvanh. “At first, people brought (the) dead fish to sell in the markets. However, the village authorities confirmed that the fish died due to chemical residue and advised the villagers to not consume or sell it,” he said. In addition, some shrimps and snails also died.

The Sangthong district’s agriculture office brought samples of the dead fish and water for testing. People were advised to wait for the results from the Plant Protection Center of the Ministry of Agriculture and Forestry before eating fish or using water from the Ton River.

“I was shocked when village authorities warned everyone not to eat dead fish and other creatures because chemicals had caused the fish to die,” said Mr. Thongvanh. “I thought I might not be able to fish from the Ton River ever again.”

This is the first time the Chinese-owned company has been found to be involved in any wrongdoing. It received an enterprise certificate from Ministry of Industry and Commerce in Vientiane to operate a business on October 10, 2014. The capital registration investment was US$500,000. The contract terms between the Chinese company and the government state that continued operation by the company will be decided on a year-by-year basis.

Sangthong authorities have set a target of building the district around "Clean Agriculture" – this will be its slogan in the years to come. Daophet Aloun, the district governor, said that the lease would be cancelled if the Yongzhen Import-Export Production Promotion Company is found to be flouting the agreement and polluting the environment. 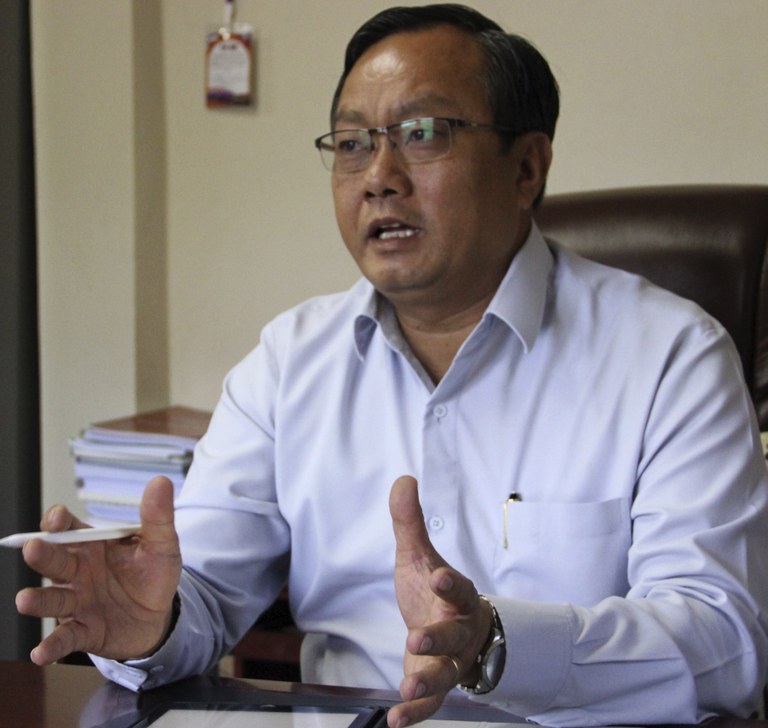 “Even though the government has been pushing the crop plantation promotion policy, all projects stand suspension if the rules and regulations for environment protection are not followed,” Mr. Daophet explained.

The policy focuses on encouraging farmers to grow vegetables, fruits, rice and other agricultural crops using an organic fertilizer in line with Good Agricultural Practices (GAP).

GAP is a collection of principles for on-farm production, including livestock, and post-production processes, yielding safe and healthy food and non-food agricultural products, while taking into account economic, social and environmental sustainability.

The deputy head of Sangthong district’s agriculture office, Somdeth Bouphakham, in a telephone interview, said after a meeting between the Yongzhen Import-Export Production Promotion Company and officials at Sangthong district’s office that the company owner admitted that chemicals had leaked into the Ton River.

“We have also advised the company to strictly follow Good Agricultural Practices (GAP), one of many development targets of Sangthong district,” Mr. Somdeth said.

Norsaeng Nouanpheng, a spokesman for the Yongzhen Import-Export Production Promotion Company, said, “We really want to continue our business here. From now we will strictly follow the involved authority’s advice.”

Mr. Norasaeng also said that the Chinese-owned company expects to release fish into the Ton River on July 13, when Laos observes the National Day of Aquatic Life Release and Wildlife Protection, an annual event.

Mr. Somdeth confirmed that the company agreed to release 100,000 fingerlings into the Ton River for three years to make up for the loss of aquatic life. “Fish release should be a way for quickly increasing the population of fish,” he said.

On November 12, 2018, The Plant Protection Center released the results of sample tests of water quality and fish collected from the Ton River. The findings indicated that there were no specific insecticides of organophosphate group and carbamate group as authorities had suspected. This meant that people are now able to eat fish and use water from the Ton River. 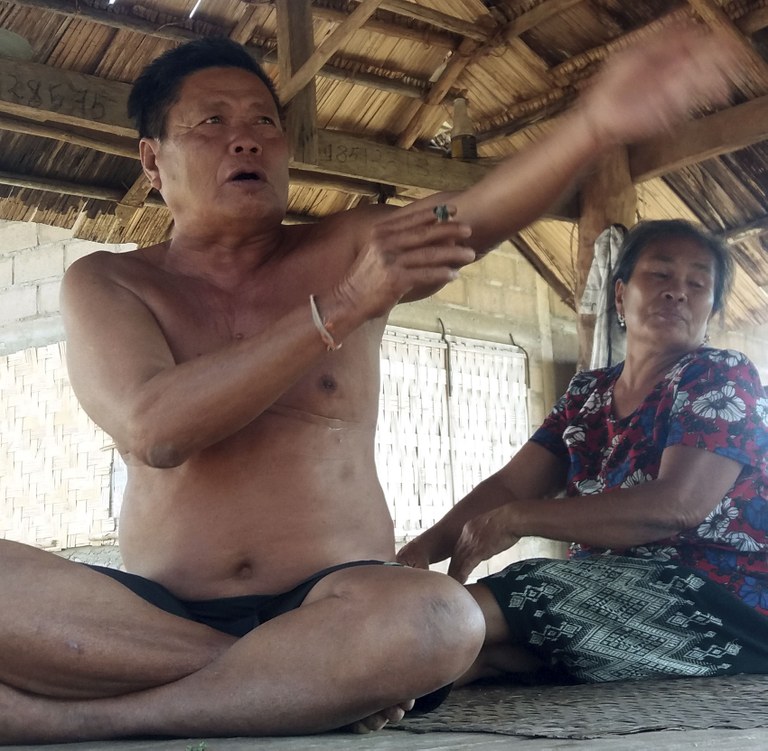 Mr. Thongvanh wants the government to stop the banana plantation as it is destroying the environment and its natural source of food for the community. He said people from 16 villages are using water daily from the Ton River, along with animals drinking from it.

“If the plantation is stopped, the aquatic life will revive in the future,” he said.

However, Mr. Thongvanh is unsure how long will it take to resume eating fish from the river even after the banana plantation is stopped.

“When I was working in the garden, I always wore a face mask and long trousers and sleeves to protect myself from possible contamination by chemicals that might be in the soil,” Ms. Kaenchan said.

Ms. Kaenchan was selling bottles of soft drinks in her shop in Kua village. As her house is located not far from the Chinese-owned banana plantation, she said she usually smells acrid air when chemicals are being sprayed on the crops.

“I want the authorities to strictly monitor the situation and have a specific method of chemical control on banana plantations if they continue to exist,” said Ms. Kaenchan.

Philippines
Appetite for Sustainable Alt-Meat Growing, but a Bigger Push Is Needed in the Philippines
© 2023 Earth Journalism Network All rights reserved.