There is no other way to put it, say leading academics, the government is ill-equipped to stop Thailand’s air-pollution crisis from spiraling further out of control. Despite proclamations like made those last week by Natural Resources and Environment Minister Warawut Silpa-archa for healthy air by 2022, the policy-making culture seems blind to what nature is telling us. Instead, lawmakers downplay the threats air pollution poses to human health, allowing conflicts of interest to overshadow meaningful advances toward solutions.

Asst Prof Surat Bualert, dean of Kasetsart University’s Environment Faculty, says the data for Bangkok’s air quality reveals we are entering a new era: The volume of PM2.5, or fine dust particles smaller than 2.5 micrometres, that exceed safe levels are lingering in the air longer than ever before.

“Their ongoing presence creates more unpredictability at a time when the changing climate may also be contributing to extreme weather events, like the prolonged stagnation that fuelled Bangkok’s pollution crisis this year,” he said.

Furthermore, Prof Thanawat Jarupongsakul, chairman of the National Strategic Drafting Committee on Green Growth, says his research in collaboration with the Japan Agency for Marine-Earth Science and Technology shows that conditions similar to those in Bangkok early this year, “are likely to become more intense because the pollution sources themselves help build up the inversion layers that trap the dust underneath." 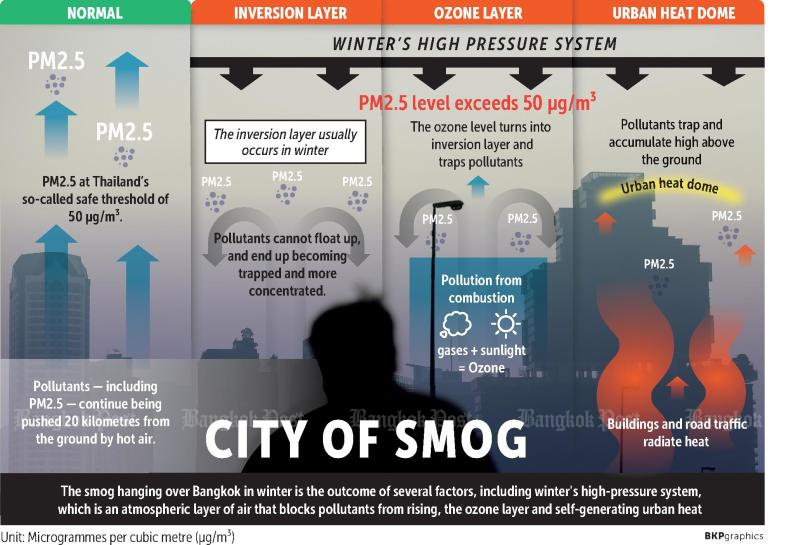 Prof Thanawat, who also chairs the Thai Global Warming Academy, says outdoor fires generate gases along with PM2.5 particulate matter. Photochemical reactions transform these gases into ozone particles, which are not just harmful pollutants, but also help build up inversion layers, which prevent the air below from rising, thus trapping any pollutants that are present.

Often, these inversion layers are associated with high-pressure weather systems descending from China. Common between December and May, this annual phenomenon contributes to the urban myth that China’s “winter wind” is the source of Bangkok’s winter pollution.

Nothing can be further from the truth, says Dr. Thanawat. Rapid urbanization has transformed Bangkok’s landscape, creating a heat-island effect that helps stimulate the formation of inversion layers during winter and traps the area’s self-generated pollutants.

Supita Roenjit’s animated video works to debunk the myth long-held by Bangkokians that the city’s winter air pollution travels down from China, showing instead how the city's haze is wholly homegrown.

The climate-change expert explains that surface inversion layers can form as low as 400 meters above the city and can linger for upwards of a month, as occurred early this year. The behaviour of air pollutants under such conditions becomes more irregular and the concentration more hazardous, especially for those living in high-rises, says Dr. Thanawat.

He warns that Thailand may have reached a tipping point.

“There’s no doubt our weather patterns are changing, and we’ve known this would occur due to climate change. While we can’t be certain about specific events, we must accept that none of this is nature’s fault. We should abandon our polluting ways because we can no longer count on nature to blow it [pollutants] all somewhere else.”

No command, no control

About 90% of the dangerous particles in the air in and around Bangkok are generated by vehicle exhaust, biomass burning, factories and dust from construction sites. And as the pollution readings ratchet up, so do health-related economic costs.

“Estimates of damages associated with concentrations of larger air particles, PM10, in Bangkok are around 446 billion baht per year [US$14.7 billion],” Assoc Prof Witsanu Attavanich, from Kasetsart University’s Faculty of Economics, says, referring to his findings on the social and economic impacts of air pollution and their solutions.

“Information associated with PM2.5 is not yet available. But damages will certainly be higher than PM10 because they cause more severe health problems,” he added.

Thailand’s Pollution Control Department (PCD) is well aware of these costs. It cites a study by Shi Y, et. al that in South and Southeast Asia between 1999 and 2014 PM2.5 is believed to have caused around 1.4 million premature deaths and recommends urgent and strict controls on PM2.5 emissions. The agency, however, has made no such moves, says Dr. Witsanu.

“We can’t seem to market clean air. Therefore, there’s no value and people don’t see the true costs they have to pay. There must be a study to show that it is worth it for the government to invest to resolve the pollution crisis. However, the government first has to realise that we’re facing an air pollution crisis that demands this research,” Dr. Witsanu says. 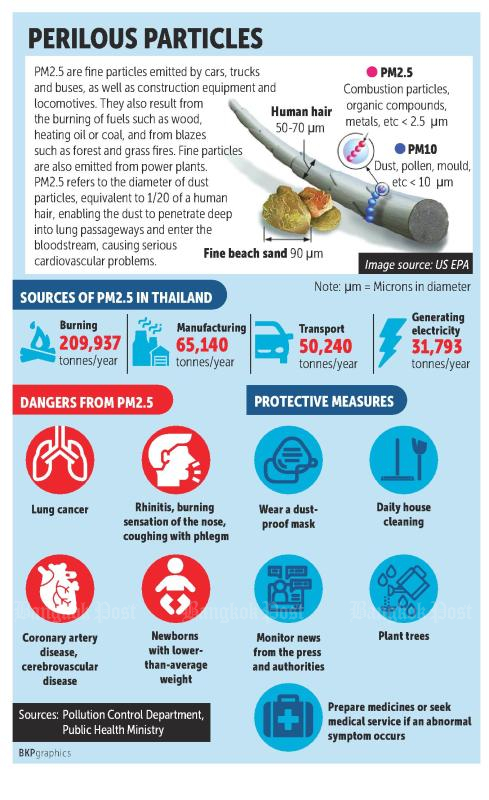 This is a complex problem requiring an integrated, multi-layered approach to achieve any real improvements, he adds. But the government is stuck in an ineffective “command-and-control” mentality that only gives the appearance of a response by focusing on weak pollution-control regulations. Such a narrow approach has proven ineffective because it lacks enforcement mechanisms.

For example, vehicles emitting dangerous black exhaust remain in widespread use. Moreover, despite anti-burning regulations, 66% of the sugarcane that entered mills this year was burned prior to harvesting.

Dr. Witsanu argues that economic incentives, which will compel the public to change its behavior, must be put in place and the pollution tackled at its root. He advocates taxing vehicles directly for the harm they cause and creating new markets for agricultural waste and biomass that do not involve burning.

Accomplishing this, however, would require a seismic shift in policymaking, says Assoc Prof Niramol Suthamkit, director of the Pro-Green Centre at Thammasat University.

“Air pollution from vehicles, infrastructure construction and property development are the result of urban and economic growth priorities,” she says. There is little space in policymaking that prioritises the environment for society’s overall quality of life, she adds.

Despite Bangkok’s pollution and traffic challenges, the number of registered vehicles has more than doubled in the past decade to 10.5 million vehicles. No effort has been made to reduce these numbers. Instead, transportation plans call for another 1,047 kilometres of new roads and expressways over the next decade, Prof Niramol says. 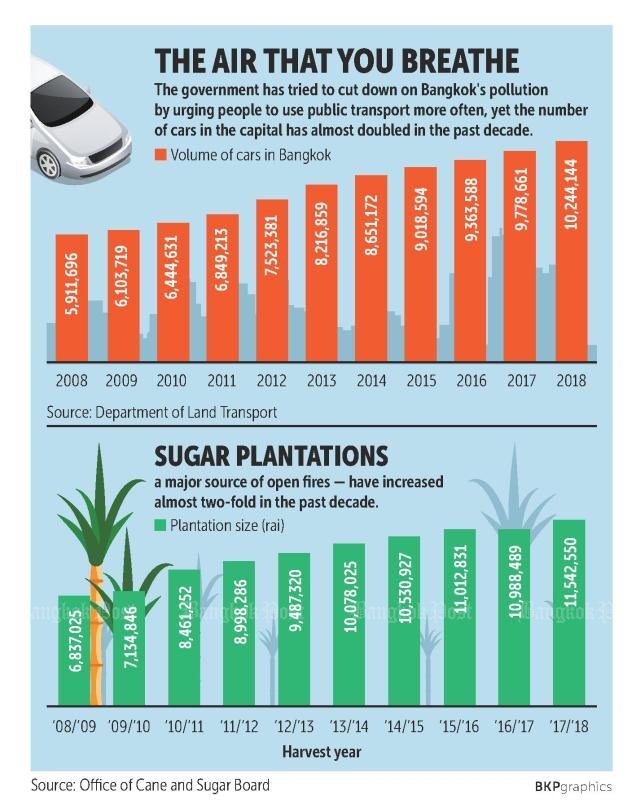 "Conflict of interest is the key problem within government agencies,” says Supat Wangwongwattana, former director general of PCD and currently a lecturer at the Faculty of Public Health at Thammasat University. “For example, the mission of the Industry Ministry is to promote more industry, yet at the same time, it is responsible for industrial pollution control. How can it balance between the two?”

Supat argues that such internal conflicts result from the evolution of a government bureaucracy intent on facilitating economic development over growing concerns for environmental protection. Efforts to establish an independent body with full authority to take charge of environmental issues have never gained much traction, he explains.

Though supportive, Supat concedes that from his experience heading the Pollution Control Department, he cannot envision how such a body could ever be welcomed within the Thai bureaucratic system. A more palatable, but less effective step, might be to seek avenues to break up obvious conflicts of interest. Possibly the Pollution Control Department could oversee the environmental aspects of factory licensing and operations he suggests, removing the Ministry of Industry from the loop.

“Still,” he says, “it depends on the government’s political will.”

“Nationwide, there has been an alarming level of PM2.5 in the air for a long time,” observes Chol Bunnag, director of SDG Move Thailand and lecturer with the Faculty of Economics at Thammasat University. “Chiang Mai, in particular, has been at a crisis level for a decade now. Air pollution only became an issue for the government when Bangkok’s worsening air quality stirred-up significant public discontent this year. Bangkok has always been the priority, the centre of authority and development, leaving other parts of the country out in the cold.”

Emergency declarations were never made by the central government regarding Chiang Mai’s air quality for fear that it would reflect negatively on the country’s tourism image, Chol says. Decentralisation of decision-making and authority could encourage regional development policies to address more localised needs.

Moreover, a “silo-structure” within government agencies discourages officials to work cooperatively across agencies, focusing instead on their own priorities, he says. Nowhere is this constraint more clear, and the opportunities to overcome them more explicit, he adds, than Thailand’s publicised commitment to meeting the United Nations’ Sustainable Development Goals (SDGs).

To achieve these 17 goals, all of which have environmental components, officials with special expertise are required to work across disciplines and agency priorities, notes Chol.

Both plans stress the need to transition to a more integrated administrative structure, working process and budgeting. They also promote the introduction of a more bottom-up decision-making process, she says, “to move the country forward in a more balanced way.”

Chol appreciates these efforts, though he feels that they are superficial and move too slowly to allow the government to get a handle on the rapidly deteriorating environmental quality besetting the country.

Need for the public to pay for solutions

Improved social consciousness cannot on its own deliver solutions, says Chol. The government can’t just assume a more educated public will lead to changes in behavior.

“If you want change, rules and regulations have to be established with some form of motivation provided,” he notes, pointing as an example to Holland’s public transit system. While Dutch people may or may not be environmentally conscious, they use and support cleaner public transport largely because it’s more efficient. Applied locally, asking Bangkok commuters to use public transport will never work, insists Chol, so long as private cars and motorcycle are seen as more convenient or less expensive.

Dr. Niramol agrees, relying on the public’s goodwill is not enough. Like so many others, she sees environmental problems growing faster than society’s response to resolve them. Direct environmental surcharges, not indirect taxes from general tax revenues, should be used to finance solutions. For example, consumers should be made aware that rice prices must rise so that we all shoulder costs associated with shifts away from biomass burning by the agriculture sector.

For the most part, Assoc. Prof. Dr. Amnat Chidthaisong, from the Graduate School of Energy and Environment at King Mongkut’s University of Technology, says public awareness is still critical, as this fuels government action.

“But, maybe not in Thailand,” he observes half-jokingly, noting the limited government intervention so far despite growing levels of public understanding.

Science provides ample evidence that a crisis is already here, he stresses, but so far scientific truth is not enough to drive solutions, leaving the government to continue playing politics and seeking personal benefits.

“Call me a pessimist, but by the time the problems are so extensive that people and the government feel it is time to respond, we will probably be thinking about migrating to Mars,” he says.

This is the second installment of a two-part investigation examining the structural impediments to resolving Thailand’s evolving air-pollution crisis. Part 1 can be viewed here. Versions of these reports also appeared in the Bangkok Post (Part 1, Part 2), and Thai-language versions were published by Thai PBS and Manager online. Reporting was supported by Internews’ Earth Journalism Network.

Banner image: More people in Bangkok are forced to wear face masks due to rising levels of PM2.5, particulate matter in the air caused by emissions from pollutants such as vehicles and power plants / Credit: Bangkok Post