Polls and pollution along the Ganga

Polls and pollution along the Ganga

Water, air and soil are all polluted in Uttar Pradesh, India’s most populous state; but no campaigner in this election season talks about it. This is the second part of a three-part series on how the environment is factoring into India’s general elections. Read the first part here.

“No political party wants to talk about the state of the Ganga because they are all guilty,” says Pradeep Manjhi. “We boatmen of Varanasi know this because we are on the river every day. That is why we do not accept all this talk of Modiji cleaning the Ganga.”

In Varanasi, the parliamentary constituency represented by Prime Minister Narendra Modi, nobody thinks he can be defeated in the polling scheduled on May 19. “But people now know that he does not keep his promises, especially to Dalits and Muslims,” says Ishtiaq Ansari, a resident who calls himself a supporter of the opposition Samajwadi Party. “I think his margin of victory will come down.” 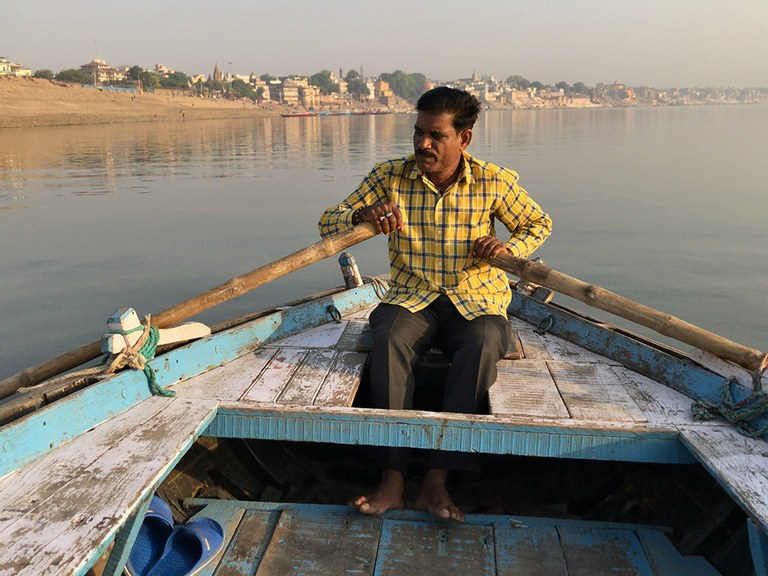 Prabal Sonkar was playing cricket in a wasteland, the only vacant plot between the Varanasi neighbourhood of Phoolwariya and the railway tracks. “What else can I do? I am 25. I have completed my BA, I have sat for every recruitment examination, I have looked for a job everywhere, I have not got anything.”

Has he heard of schemes by the outgoing BJP-led government to provide loans so that young people can start their own businesses?

“Yes, of course I have heard of them," Sonkar said. "Modiji and other BJP (Bharatiya Janata Party) leaders keep talking about the schemes all the time. So I checked with three banks. None of them will give a loan without a surety. My father is an auto-rickshaw driver. He does not even own the auto-rickshaw he drives. What will I offer as surety? I need a job.”

On the wasteland, the game has changed from cricket to football. The level crossing the rail tracks has opened up after a long wait, and motorcycle riders take a short cut through the dirt tracks that divide the wasteland from the garbage dump of Phoolwariya. Pigs, goats and cows root among discarded plastic bags. Garbage of all kinds lies strewn around.

“Who thinks of Phoolwariya,” responds Rampal, a vegetable seller taking the evening air atop his empty cart. “This is a place where we Dalits live, and so do the poor people among the Muslims. The BJP people know we will not vote for them. So they don’t come here. When Modiji comes to Varanasi to campaign, you’ll see he will go to the Ganga ghats and get photographed. He will talk to the rich people. He will not come here. Who cares about us?”

Shail Bala qualifies as a first-time voter from Phoolwariya, but says she cannot vote because she has not got her voter’s identity card. “They removed our names.” Who is they? “I don’t know.” How does she know her name has been removed? “I haven’t got my card.” Does she know that as long as her name is on the voters’ list, she can use another identity card and vote? “I didn’t know that.” So will she try to vote? “What’s the point? Modiji will win anyway.”

Sitting on the porch of their home, her mother says, “I will vote. We have always been BSP (Bahujan Samaj Party) supporters. I will vote for the gathbandhan (alliance of the SP and BSP).” 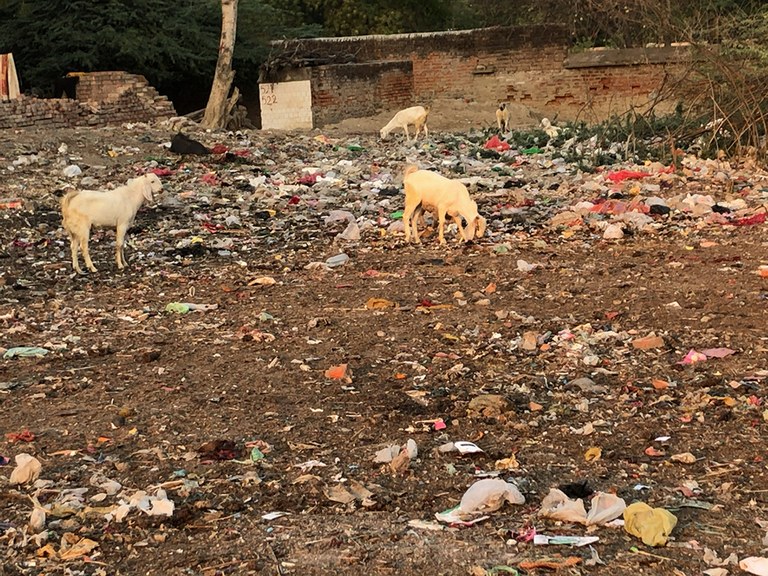 In Uttar Pradesh – the state with India’s highest population and which sends 80 representatives among the 543 elected to the lower house of India’s Parliament – the Samajwadi Party and the BSP are in an alliance to oppose the BJP. During the last general elections in 2014, the BJP won 71 seats from the state. In the middle of this year’s poll, the feelings indicate that the contest is more evenly balanced.

Pradeep Manjhi and many of fellow Ganga boatmen in Varanasi are also planning to vote against the BJP, because, they say, the schemes for beautification of the ghats (riverside steps) in Hinduism’s holiest city keep displacing them from the mooring spots of their boats.

“And after all this, the river is dirtier than ever. These BJP people just keep talking. When we tell them the river cannot be cleaned unless they get their sewage treatment plants working, there is no response. It was a lot cleaner during the (January-March) Kumbh Mela in Allahabad (officially called Prayagraj now) because they released water from Tehri (dam in Uttarakhand upstream). Now they have stopped the water again, and you can see that there’s not enough water to take away the garbage. The river doesn’t even flow.”

Manjhi stops rowing, and the boat stays still in the black water.

The shopkeepers in the narrow lanes of ancient Varanasi have a different tale. “Modiji has been very good for business,” says Ghanshyam Tiwari, who runs an ice cream parlour. “Many more people are coming to Varanasi from all over India and all over the world. They spend money. There is a lot more money going around. Then he organised the Pravasi Bharatiya (non-resident Indian) summit here. Thousands of people came. They went to all the temples and the ghats. They spent so much money. It has been very good for us. Of course, we shall all vote for him and send him back to Parliament with a bigger majority than the last time.”

In Kanpur, almost 350 km upstream of Varanasi on the Ganga, the divide is sharper. The biggest industrial city of Uttar Pradesh has a large number of state-owned ordnance factories, whose managers and workers are reportedly enthusiastic about the muscular tone adopted by the BJP in India’s dealings with Pakistan, especially Islamist terrorists allegedly backed by elements within the Pakistan government.

But it is not so clear among the owners and workers of the hundreds of tanneries that bring Kanpur a large chunk of its revenue. For decades, the tanneries have resisted all attempts to clean their effluents before they flow down to the Ganga nearby. This has been the biggest single source of industrial pollution in the Ganga, India’s longest river. Then last October, the state’s pollution control board ordered temporary closure of all the Kanpur tanneries in preparation for the January-March Kumbh Mela – one of the biggest Hindu religious festivals – in downstream Prayagraj.

“We lost billions in cancelled export orders,” says a tannery owner who refuses to identify himself. “We could not supply to the shoe industry in the country. Hundreds of thousands of workers have been without a salary since October. The Kumbh got over in March. It is now the second half of April. We still haven’t received permission to restart our operations.”

That is not quite correct. The factories are behind high walls and locked doors, but the smell of hides being cured cannot be concealed. And once it gets dark, a mule cart loaded with cured hides clip clops down the main road of Jajmau, the tannery neighbourhood.

What have the tannery owners done to treat their effluents? “The government should do it,” responds the man who still refuses to give his name. “We can’t afford to set up treatment plants. We can only show our anger by voting against the BJP. All our workers will vote against the BJP, which is making them starve.”

In another part of Kanpur, there is little sympathy for the tannery owners. “Who says they can’t afford to set up treatments plants,” asks Dinesh Tripathi, a lawyer in the district court. “They are among the richest people in this city. They are complaining because for the first time, they have had to face the law. The government has done a very good job. They should be supported by all of us. I’m going to vote for the BJP.”

It is, though, unclear whether local issues will matter more in a general election than national ones. Shashi Tyagi is the owner of a new restaurant in Jaunpur. He is fed up by cows ending up on roads or garbage dumps due to a recent decision by the government to ban cow slaughter of aged cattle. 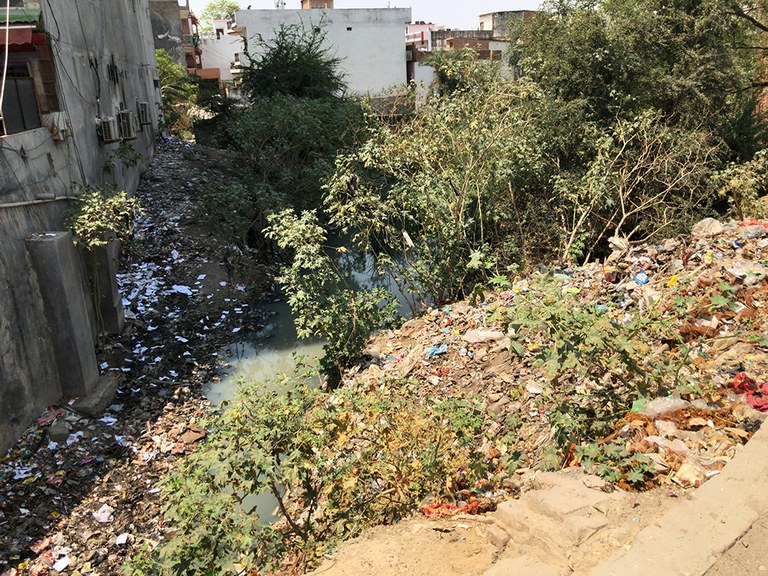 The drain and garbage dump along the main road of Jaunpur, Uttar Pradesh / Credit: Joydeep Gupta

There is a garbage dump right next to Tyagi’s new-looking restaurant, and a drain flowing beneath the dump. Neither looks as if it has ever been cleaned. “That is right. I’ve never seen the municipality people here. It’s a big breeding ground for mosquitoes. But what can we do?” Does this helplessness translate into anger against the government? “Yes, of course, the [state] government is to blame, and they will suffer in the next election to the state assembly. But that won’t affect the Parliament polls. You can’t expect Modiji to clean every drain in the country. People will still vote for him.”

Joydeep Gupta is the director of EJN's Third Pole Project.