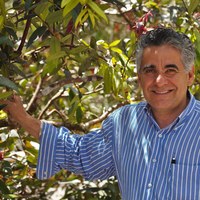 Gerardo Ceballos (Credit: Universidad Nacional Autónoma de México)
Gerardo Ceballos is a Mexican biologist whose work on mammal conservation has contributed to the creation of protected areas including the Chamela-Cuixmala Biosphere Reserve in the state of Jalisco, and Calakmul, a protected area in the state of Campeche. A researcher with the Institute of Ecology at the National Autonomous University of Mexico (UNAM), Ceballos this year was elected to the U.S. National Academy of Sciences.
In 2017, an article he coauthored with Stanford biologists Paul Ehrlich and Rodolfo Dirzo in the Proceedings of the National Academy of Sciences, reported that species extinctions have accelerated since 1990. The scientists described the phenomenon as a “biological annihilation” affecting ecosystems and the provision of vital services for civilization. In July, Ceballos addressed a Congress of the Latin American and Caribbean Section of the Society for Conservation Biology, held in St. Augustine, Trinidad and Tobago. While there, he spoke with EcoAméricas correspondent Daniel Gutman.

What were the principal findings presented in your 2017 article?
We analyzed the degree of population reduction or extinction of 27,660 species of vertebrates—nearly half [of known vertebrates]—from 1990 to 2015, according to data from the International Union for Conservation of Nature (IUCN) and other sources. We established that the populations of almost a third of vertebrates studied are declining. In the last 700 million years of life, what scientists call massive extinctions have occurred five times. During their course, a very high proportion of plants and animals were lost in a geologically short period due to natural phenomena such as the impact of a meteorite or change in the structure of the oceans. The quantity of animals we’re losing today indicates to us that we are entering a sixth massive extinction which will be more rapid than all [the others]. It is practically instantaneous, in geological terms, and is caused by human beings.

Did the results surprise you?
The surprising thing is species that 10, 15 or 20 years ago we considered not at risk are facing the possibility of extinction. This is going very rapidly. In vertebrates we are losing in 100 years what should be lost over 10,000 years. And we’ve established that species with populations of fewer than 1,000 individuals today range from small fish to large mammals. Many cases have caught our attention. On the island of Borneo 100,000 orangutans were lost over 10 years. It’s crazy. Look at the lions or African elephants. Who would’ve thought 15 years ago they’d be in danger of extinction? In Mexico, there was much criticism about the vaquita [porpoise] that was caught to be taken to an aquarium and died. But only 30 vaquitas are left, and it is preferable for some to die while trying to save them than to have them die while we do nothing.

What reaction has the article caused?
Some scientists have told us that we can’t know that we are entering a massive extinction until it is over. That is completely irrelevant and trivial because we are not going to be here when this is over. But even if we were not entering the sixth massive extinction, the current species-extinction crisis is more serious than climate change. People think that it is part of a natural process, and they are wrong. The positive information is that as this crisis has been caused by us, it can be resolved by us. Many of the threatened animal species are very small, with little charisma, [and they] can be saved with very little effort. In Mexico, we are addressing some fish species with US$5,000, which is what it costs us to build tanks to save them.

How should this situation be handled?
A fundamental issue is the size of the [human] population. The fewer children we have, the better. I work with Stanford Professor Paul Ehrlich, who 50 years ago published the book The Population Bomb, in which he said that planet’s fundamental problem is population growth, and he was criticized widely. The problem is that few countries have clear population policies. For example, in Mexico, if we knew that the optimal population were 140 million people, we would have policies to ensure that this number is not exceeded. The second point is consumption. It is extremely important that, in particular the rich, cut back on consumption. We must use less plastic that is not going to be reused, and we must not be permanently getting a new cellular telephone. We must get out of the chasm of consumption, which in addition makes us unhappy. The third question is getting ourselves involved. Scientists can have great social impact since if we are able to conserve the forests, the communities that live in them—which are generally the poorest—will have a better quality of life.

What are the particularities of Latin America in all this?
Along with Southeast Asia, [Latin] America is the region with the world’s greatest biodiversity. So to lose a hectare of forest in Mexico or in Guyana has much more impact at a global level than to lose it in Europe. Unfortunately, in recent years the deforestation rates have accelerated a great deal, and there are areas such as [South America’s] Atlantic Forest or the Chaco, which are losing biodiversity very rapidly. The other particularity is that we have a great deal of habitat that can be saved. Amazonia, the Andes, southern Mexico or the Orinoco watershed are regions that still have a great deal of nature in a relatively good state of conservation. If we do the correct work, our continent is one of those that has the best prospects.

How can these issues be discussed with political leaders?
As scientists we must try to put ourselves in the shoes of politicians, who have a different perspective than ours. If we tell them that we must preserve animal species, they laugh. Then we should explain how biodiversity can give direct benefits to the country and the people, and allows them to win elections. We should work so local communities, which are the owners of biodiversity, have concrete economic benefits to conserve it and not destroy the forests. The next two or three decades will be fundamental for vertebrates because many of them will be reaching critical stages. We must be creative because starting now we are going to face environmental problems of such magnitude that if we don’t change, civilization will collapse.