Bangladesh joined the COP26 UN Climate Change Conference in Glasgow to negotiate about climate financing, loss and damage, mitigation, and global warming targets. The negotiations at the conference have concluded for this year on Friday.

The Business Standard talked with Saber Hossain Chowdhury, chair of the Parliamentary Standing Committee on the Ministry of Environment, Forest and Climate Change, about Bangladesh's expectations and achievements with regard to the issues at hand.

TBS: What is Bangladesh's position on the draft decision on the table?

Saber: So far there is some progress, and some backtracking in the negotiations. There are some new additions as well. However, we are in a climate emergency and we did not progress enough, considering the scale of ambition and speed of action so far (till Thursday).

TBS: What are the signs of progress so far?

The loss and damages have been recognised to some extent and the climate fund tracking mechanism is a good achievement here.

TBS: What is lagging behind?

Saber: The results we have been expecting from the COP26. Those results are not coming reflecting in the decision making. We want a strong position from developed countries on keeping the 1.5°C target alive.  We want a clear position from them on it and we are trying hard to do make that a priority.

They also have to increase the funding. We told them that for 2020 to 2024, we have demanded $500 billion in five years. We want that to be divided 50:50 for mitigation and adaptation respectively. This is still undecided.

TBS: What is Bangladesh's priority?

Saber: We are giving priority to loss and damage. We have proposed making the Santiago Network functional and they have accepted it. We know that the issue of loss and damage will not be settled here and we must keep the issue alive for negotiation at the next COP in Egypt, where we hope there will be much progress.

TBS: What do you think of $1 million from the Scottish government's loss and damage fund?

Saber: It is a recognition of our logical demands though the money may be token and nominal.

TBS: What is the difficulty in meeting the demands regarding loss and damage?

Saber: When we raised the issues of liability and compensation, the developed countries turned back. Now they are saying you can take funds, but not for loss and damage. They want to give it as an adaptation fund, but we don't want to go for that. Loss and damage are beyond the reach of adaptation measures and once you lose, you will not get it back anymore. The loss and displacement is permanent. Here they are not agreeing and there is more work to be done in this regard.

The most important thing is to keep the target of 1.5°C alive. If that is not settled, then determining the amount of losses remains unclear.  What is the situation we must adapt to? how much funding and resources will we need for adaptation,? All the measures are dependent on temperature.

In our meetings on Wednesday and Thursday, they told us their goal is to hold the increase in global average temperature below 2°C and bring it to 1.5°C. But I have disagreed and said at present we need to bring it to 1.1°C. I have urged them to measure how the condition would deteriorate if we set the target at 1.5°C. As the leader of vulnerable countries, we have brought in a new dimension to the discourse.

TBS: What do you think about the pledges of the developed countries?

Saber: Pledges and reality are not the same thing. Due to past COP promises not kept, the lack of trust will increase in future. For example, developed countries promised to give $100 billion by 2020, but did not deliver it. Unkept promises are not a good sign for our future COPs.

TBS: What is the progress in negotiations on Article-6?

Saber: There may be some progress but will not be up to our expectations. This is not enough to keep up with the demands of an ongoing climate emergency.

TBS: Do you think the G77 and China should play a stronger role?

Saber: It seems to me that the leadership of China and the G77 to bring everyone onto a common platform is weak and shabby. Earlier, China had dominance and currently the like-minded developing countries have a role to play but I don't think the group is functioning in an orderly and efficient manner.

TBS: What will we be taking home from the COP26?

Saber: There are questions in my mind about the UNFCCC (United Nations Framework Convention on Climate Change) process. Unity is very important for multilateralism. Multilateralism means unity and it inspires all. But all have to be united with good faith and if you want everyone to agree on an issue, they agree only on the lowest common denominator. Everyone agrees only on the easy issues, but when there are any hard or complex decisions to be made, everyone fails to agree.

In the present condition of the world, we need fast actions and ambitious goals. In that case how will we proceed by making all the parties agree on any issues? – that is my question regarding the process of the UNFCCC. We have to rethink how we will be able to coordinate it.

TBS: How do you see the USA's return to the Paris Climate Agreement?

Saber: As the USA has returned to the Paris Climate Agreement, our hopes and expectations have risen. If the coming work to be done can't meet expectations that will be a bad thing.

TBS: What is the progress of the 50:50 emphasis on adaptation and mitigation?

Saber: It is under discussion but so far, no decision. Bangladesh is waiting for a decision.

This story was originally published in Business Standard Bangladesh on November 12, 2021. It was produced as part of the 2021 Climate Change Media Partnership, a journalism fellowship organised by Internews’ Earth Journalism Network and the Stanley Centre for Peace and Security. 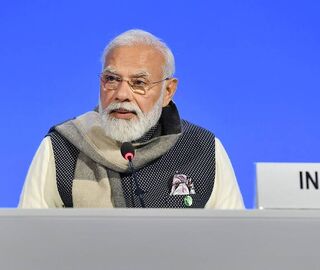