In October 2020, when Indians were reeling under the first wave of Coronavirus pandemic and lockdown restrictions were being eased gradually, a “biodiesel” manufacturing unit secretly came up at the outskirts of Mumbai, India’s commercial capital.

The production unit, which was set up in an under-construction building in Kalyan city of Thane in about 1,200 square feet of area, had a few drums connected with pipes and a motor. It was allegedly producing spurious biodiesel at a large scale.

“No one in the area, including the owner of the under-construction building, had an inkling about their business as they had claimed they were into some solvent business. Instead, they were caught mixing cheap furnace oil, base oil, and chemical color to make spurious bio-diesel which was being sold as ‘biodiesel’ at the cost of Rs 54 per liter. It attracted buyers as the normal diesel price was about Rs 80 per liter at that time,” Sanju John, Senior Police Inspector of Crime Branch, Thane, Maharashtra told The Dialogue.

John, who raided the premises in December 2020, claimed, “Within a month, their cheap ‘biofuel’ became a rage among truck drivers, private buses, and fishermen. They procured raw material from online platforms like Indiamart.”

Biodiesel is a renewable fuel made from low-cost palm oils, used cooking oil, and other natural feedstocks. B100 or pure biodiesel is available at Rs 60-75 a liter on Indiamart. Petroleum diesel prepared from imported crude oil is priced at Rs 97 a liter. Biodiesel is cheaper than diesel because it’s largely produced indigenously and subsidized by the government.

Spurious biodiesel, sold for about Rs 50-55 a liter, is made of byproducts of petroleum refineries such as a cheap furnace or fuel oils, white spirit, or mineral turpentine.

Furnace oil or fuel oil is one of the cheapest fuels which is used to run furnaces in the metal industry, boilers in the textile industry, power generator sets, and marine propulsion and easily available.

“Over 9,500 liters of adulterated oil, equipment, and two vehicles, collectively valued at Rs 30 lakh (USD 40,000) were seized from the site. The quality controllers from Indian Oil Corporation verified that the biodiesel is substandard. Eight people were booked under the Motor Spirit and High-Speed Diesel (Sale, distribution, and curb on malpractices) Amendment Law 2017 and Indian Penal Code Section 285 that deals with negligent conduct with respect to combustible mat­ter to endanger human life,” claimed Bhushan Dayma, another crime branch officer in John’s team.

Most of the biodiesel in Maharashtra is either sold directly to buyers or blended with high-speed diesel illegally and sold through fuel stations, insiders say.

Neighboring state Gujarat has had a tough time over the past couple of years in cracking down on fake biodiesel networks that have spread across major cities.

In the first week of July 2021, Gujarat police booked owners of seven fuel stations located along the National Highway 48 in the Vadodara district for allegedly selling spurious biodiesel.

Another gang was busted in the Anand district in the third week of July and 37 lakh liters (3.7 million liters) of alleged fake biodiesel was seized from them. Over a dozen fake biodiesel production units have been raided across many cities in Gujarat in October 2020.

The direct sale of pure biodiesel (B100) to bulk consumers like the Indian railways and state transport departments is permitted in India since 2015. Blended biodiesel is being sold by oil companies at many outlets.

Fake biodiesel traders are also operating a parallel business across India. They are destroying the very trust in biodiesel, sector experts say.

“The quantity and ease with which the spurious biodiesel is available in India are mind-boggling. Such illegal activities have brought a bad name to biodiesel,” says Kishan Karunakaran, CEO of Buyofuels.

Coimbatore-based Buoyofuels is the only online trading platform for biofuels in India. Pure biodiesel (B100) is traded here at Rs70-75 per liter.

Karunakaran claims “Gujarat and Maharashtra are the hubs of fake biodiesel as they have ports and a lot of refineries. Hence, smuggling fake biodiesel is a lot much easier there. However, due to the continuous crackdown, these fuels are not billed as “biodiesel” anymore. But the game is still on.”

“There is a huge demand for biodiesel in the Indian market because people are increasingly concerned about the environment and health. However, the rampant sale of spurious biodiesel hurts its prospects. The spurious oil may be cheaper than the real one but it damages the machines and motors in the long run,” says Shrivastava.

Speaking on the modus operandi of such gangs, Achal Tyagi, Deputy Commissioner of Police, Zone-4, Ahmedabad, said, “Cheap fuel oils are legally available both online and offline. The suppliers just mix them and add colors to make it look like biodiesel.”

Fuels are mostly smuggled through seaports.

Demand Grew During the Pandemic

There is a huge demand for cheap biodiesel in India at present as the diesel prices are skyrocketing and pandemic-induced economic slowdown has affected the businesses. At the same time, fossil fuel prices in the country have touched an all-time high.

“The transporters and commercial establishments were badly hit in the lockdown. They are picking up the pieces now. Since diesel price is skyrocketing, cheap biodiesel is the only affordable option before us. We can’t figure out that it is fake or real,” said a Mumbai-based transporter, requesting anonymity.

Why is Biodiesel Important for India?

Unlike petroleum diesel, which contains sulfur and carcinogenic benzene, biodiesel has zero sulfur content and offers a significant reduction in carbon monoxide and hydrocarbon emissions. Biodiesel is typically blended with diesel. These blends are described by their percentage of biodiesel (e.g., "B20" has 20% biodiesel, 80% petroleum diesel).

The policy seeks to reduce import dependency and cut down on greenhouse gas (GHG) emissions for a clean environment and health benefits.

The policy aims to blend 5% biodiesel by 2030. It currently blends a dismal 0.16% biodiesel, as per the United States Department of Agriculture report, 2020.

On July 3, 2021, the Gujarat government ordered a ban on the retail sale of biodiesel. “Biodiesel can be sourced and sold via oil marketing companies only. Strict action has to be taken in view of widespread complaints about the production of spurious fuel,” Chief Minister Vijay Rupani said, as reported by the media.

Maharashtra has not woken up so far. Since the fake biodiesel makers operated their businesses illegally which was shut down by the police, they could not be reached for comments.

Minister of State for Home and Information Technology, Maharashtra, Satej (Banti) Patil, says, “The police have cracked down on the fake biodiesel traders. We would take the strictest action against scamsters in the future as well.”

The minister said he would study the policy of Gujarat in this regard to strengthen enforcement in Maharashtra as well.

This story was produced with the support of Internews' Earth Journalism Network and was originally published by The Dialogue on 12 August 2021. It has been lightly edited for length and clarity.

Banner image: A can for the collection of used cooking oil as an input to making biodiesel, photographed in Seattle, United States / Credit: Joe Mabel on Wikimedia Commons. 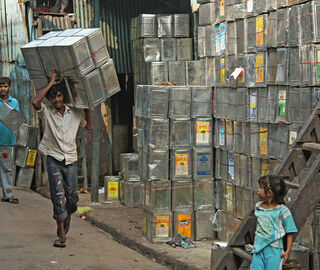