The people living along the banks of the river in North Lakhimpur district of Assam could not bathe their livestock in Ranganadi on this special day. Forced to forego a tradition among the Mising tribe to which they belong, residents bathed their cattle and goats in water pumped up from tube wells, ignoring the dangerous level of arsenic in the groundwater. 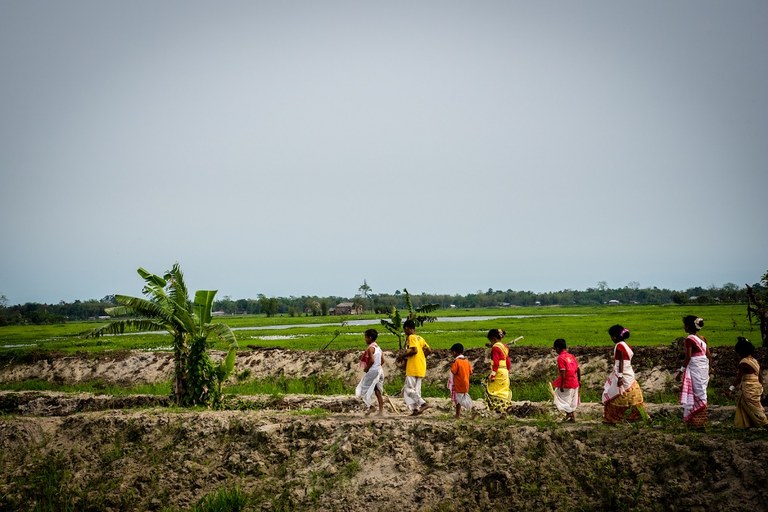 On February 9, an unprecedented amount of silt and muddy water was released from the Ranganadi dam belonging to the North Eastern Electric Power Corporation, or NEEPCO’s, 405-Megawatt Ranganadi Hydro Electric Project (RHEP) near Yazali in Arunachal Pradesh.

Shortly after the sudden release of silt by NEEPCO, scores of dead fish of different species and sizes were seen “lying at the bank of the river at Lichi, Upper Sher, Lower Sher, Boda, Upper Jumi and Komasiki village areas,” according to a statement by local non-governmental organization Jumi, Komasiki, Cher Green Plus Society (JKCGPS). The NGO has lodged a complaint with the police against the head of RHEP, holding him responsible for the destruction of aquatic life. It has also threatened to launch a movement. 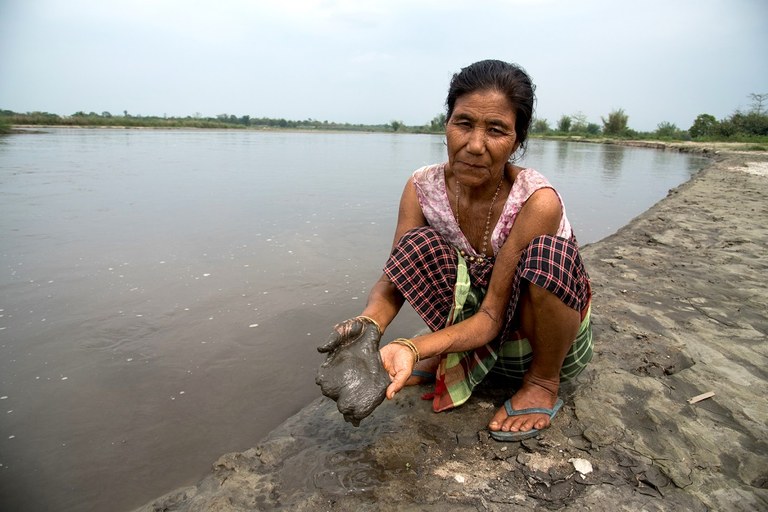 Bisan Narah shows the concentration of silt in the Ranganadi water since February / Credit: Shailendra Yashwant

The amount of silt flowing down the Ranganadi seemed unusual even for 74-year-old Bisan Narah of Shantipur village downstream.

“Although the dam releases silt from time to time for maintenance, this time the silt and contaminants are really thick in the water," she said. "That Ranganadi dam is like the government’s curse upon our people. In monsoons the floods have worsened because of the dam, in winter the river dries up because of the dam. Our paddy fields are affected by the floods and now there is no fish in the river. The water is unusable for even washing anything.” 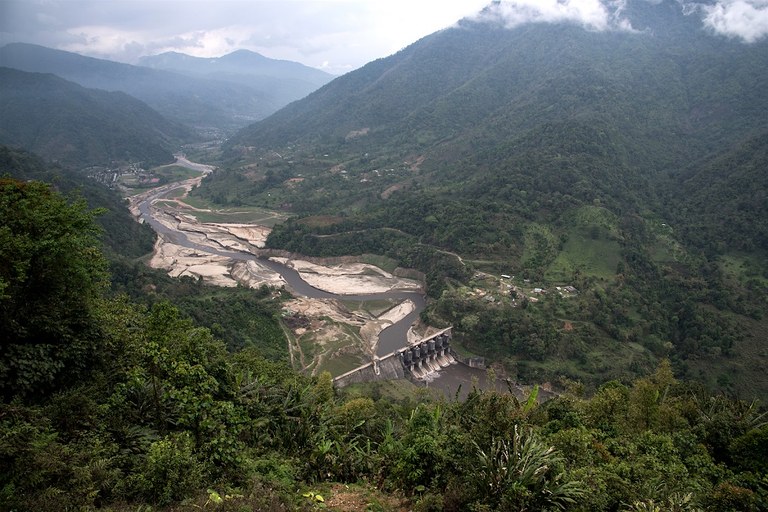 When RHEP became operational in 2001, it was hailed as the first run-of-the-river project in northeast India, which would produce electricity without impounding water and displacing people.

But several academics in Assam have since documented that that the channelling of the river’s water through a tunnel on the adjacent hillside has dried up the riverbed the entire length of the channel, effectively stopping the movement of all aquatic life up and down the river, except in the monsoon when the torrential rain common in the area still leads to the river breaking its banks. Guwahati-based environmental researcher Mirza Zulfiqur Rahman describes them as “run-away-with-the-river” projects.

As with all hydroelectric projects, RHEP engineers have to get rid of the silt before the water hits the turbine blades – the silt would ruin the blades otherwise. So the water is led to a settlement chamber from which the silt is periodically flushed out and dumped on the riverbed below the dam. It was this dump that was flushed out on February 9 by opening the dam gates. The result is a river that still flows black and turbid. 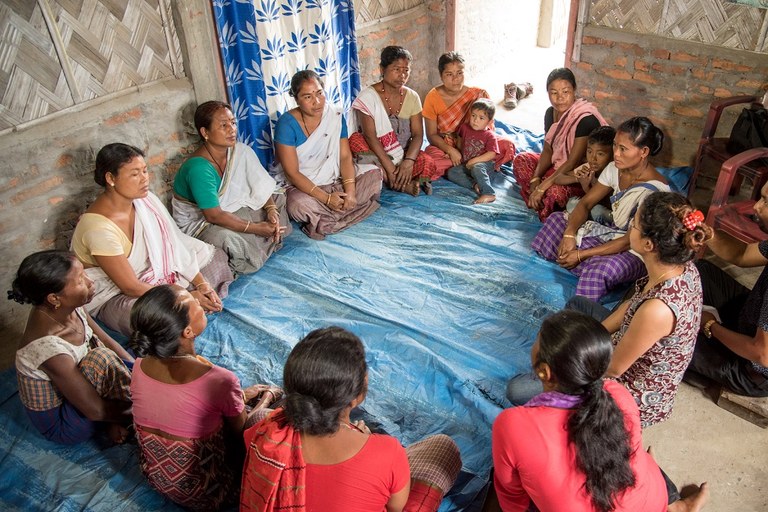 There are many traditional festivities slated for the Assamese New Year day, but it is also a holiday so the local Women Water Users’ Group (WWUG) held a meeting convened by the Transboundary Rivers of South Asia (TROSA) programme of the NGO Oxfam in Joinpur village, a stone’s throw from the recently rebuilt embankments that are supposed to protect the village from rising waters of the Ranganadi during the flood season.

Recalling the incidents that led to the current predicament, the women recounted how the RHEP was scheduled for a complete shutdown for maintenance earlier this year and had indeed communicated the same to the local authorities, who in turn passed on the information to local communities.

Downstream community organisations like JKGPS in Arunachal Pradesh and many other representatives from the WWUGs in Assam demanded that before the shutdown NEEPCO select a site for dumping the silt.

NEEPCO promised a delegation of NGOs that it would not release the silt, but on the night of February 9 the state-owned company opened the dam gates, releasing massive amounts of silt into the river downstream.

“Did you know that in its shutdown circular, NEEPCO said that it will ‘not take any responsibility for any loss/damage to life and property etc. in case of any accident owing to violation of the notice.’ What kind of company is this, and what kind of government allows them to get away with it?” asked Rachna Padun, President of Joarkhat village WWUG. 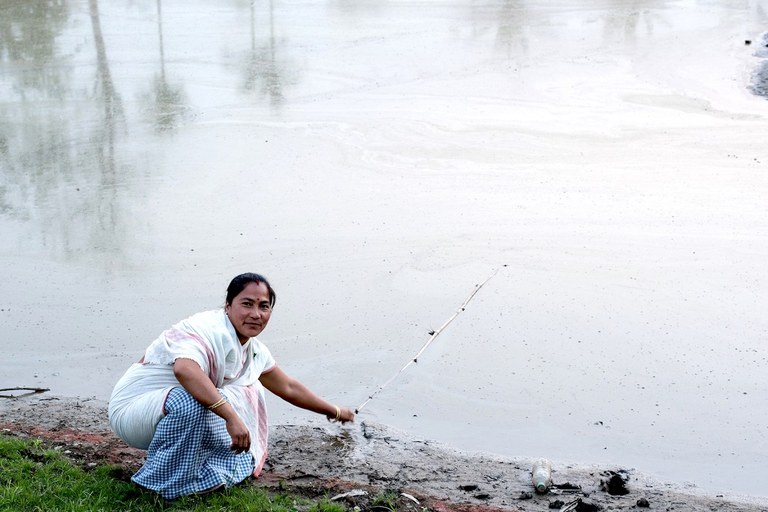 Barnali Taid sits next to what was her paddy farm and is now a permanent pond due to siltation from floods, near her house in Joinpur / Credit:  Shailendra Yashwant

“They cannot blame everything on climate change and unpredictable weather. Everyone here knows that the floods are caused by the release of excess water during peak monsoon season by the dam. When they do, the water comes with really great force, greater than the normal rise of the river during monsoon. Last year 11 houses in our villages were washed away because the force of water breached the embankments. But no one took any responsibility,” said Barnali Taid, WWUG’s water champion from Jurkha Dambigual village.

After last year’s floods that killed 11 people, the outrage against the dam forced NEEPCO to make a statement in which it said that the situation would have been much worse without the dam. The claim has been contested by scientists and downstream communities. RHEP officials on the spot refused to talk for this story and emails to NEEPCO seeking comment went unanswered. 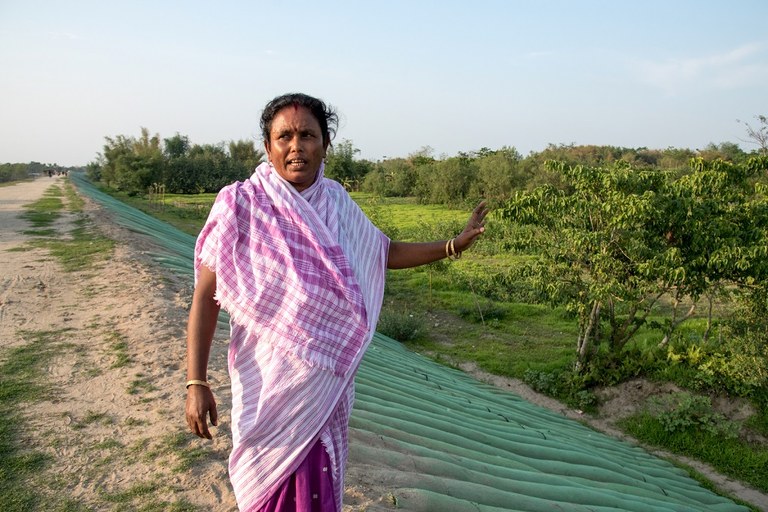 Aruna Das points out where the embankment breached during the floods of 2017 in Joinpur, North Lakhimpur, Assam / Credit: Shailendra Yashwant

“We haven’t had a chance to rehabilitate our rice farms that are destroyed in successive floods. We seem to be building and rebuilding every year and all the dam does is make some electricity that we will never benefit from,” said Aruna Das, an Aanganwadi (government-run creche) teacher and survivor of the 2017 floods that washed away her house and all their belongings. “We don’t have any factories, so we now grow one crop of rice and a few vegetables. Many farmers have tried pisciculture, but the floods level it all, even the fish farm tanks, year after year. That dam has made our lives impossible.”

“We are supposed to trust these embankments, but they have breached time and time again. The force of water when the dam releases it together with the rains is too much for the embankments,” she pointed out.

“What is the point of making electricity when there is no water to drink or food to eat and when we are living in the constant fear of our houses being washed away?” asked Barnali Taid. “The least they can do is to give us an early warning. Everyone knows that the floods are caused by the dam. The dam authorities should alert us before they release the water, so we have time to react, at least take our children and cattle to higher ground.” 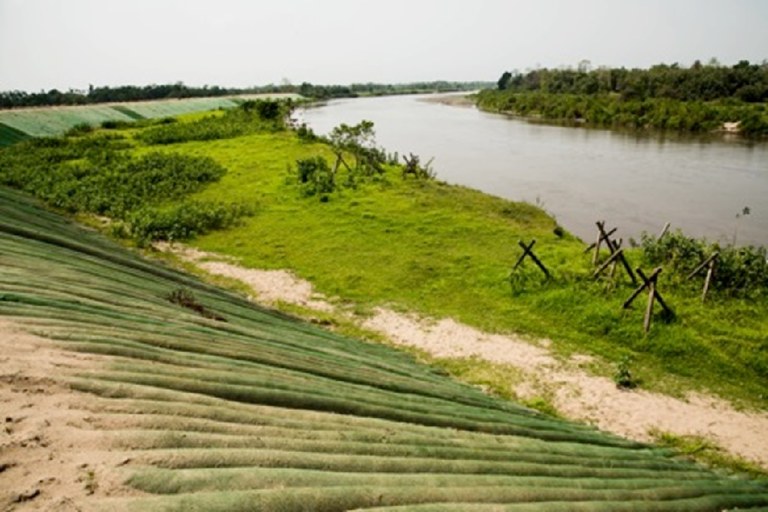 The new embankment on the Ranganadi river near Joinpur / Credit: Shailendra Yashwant

At the Joinpur meeting, the WWUGs prepared a charter of demands that they wished to present to the district commissioner, with whom they are seeking an appointment to apprise him of their problems.

Clean drinking water tops the list in a region severely affected by arsenic contamination of groundwater. That is followed by a long list of dam-induced problems for which they seek redressal: clean-up of the river from the ongoing contamination; an early-warning system in the flood season; reparations for agricultural and fisheries losses to floods; and inclusion of women in dam, flood and embankment maintenance-related meetings at the district level.

After more animated talk, the women decided to reiterate their last demand.

“Women’s water-related work is invisible in the current water paradigm, though women are primary victims of degradation of nature and water scarcity,” said Gita Rani Bhattacharya, director of the Mahila Samata Society of Assam. “Water entitlements, water technology and infrastructure and voice or decision making in the water-related institutions are mostly vested in men.”

But, said Vinuthna Patibandla, Oxfam India’s programme officer, "there are hardly any men in the villages, as all the young and able-bodied have migrated out for work due to failure of agriculture and fishing here in Lakhimpur. Clearly, there is a need to empower women to participate in water-related decision-making.”

“As part of the TROSA programme, we have formed Women Water Users’ Groups in 21 villages," Patibandla added. "They are an integral part of the village development management committee of the Panchayat and interact with district officials on matters relating to water governance.”

As she was leaving the meeting, Aruna Das asked a final question. “If these are the difficulties due to one small dam on Ranganadi, what will happen when a much bigger dam, the 2,000-megawatt dam on the Subansiri river, is made operational?”

“First let the women take control of this situation,"Barnali Taid responded. "Then we will deal with the big dam.” Everyone giggled at the phrase “take control” as they dispersed to resume their new year celebrations.

This story originally appeared on The Third Pole on May 2, 2019. 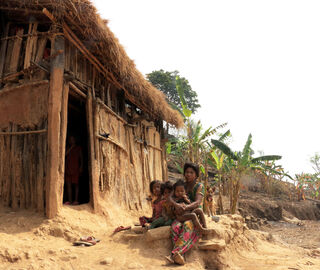 Makwanpur, Nepal
Chepangs of Nepal: Living on the edge 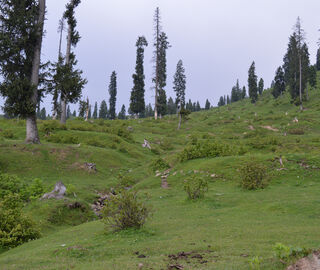