A new report by energy-focused financial think-tank Carbon Tracker shows that rapid global growth of clean energy – particularly solar and wind – will see demand for fossil fuels reach its highest point and then start falling sometime between 2020 and 2027.

The impending energy transition could put trillions of investors’ dollars at risk if they're not prepared, the report concluded.

“Fossil fuel demand has been growing for 200 years but is about to enter structural decline," said Kingsmill Bond, Carbon Tracker’s New Energy strategist and the report’s author. “Entire sectors will struggle to make this transition. They can expect price declines, greater competition, restructuring and stranded assets.”

The report, “2020 Vision: Why You Should See Peak Fossil Fuels Coming,” was released at the Global Climate Action Summit (GCAS) in San Francisco last week. That event aimed to celebrate the achievements of states, cities, companies, investors and citizens with respect to climate action. It also brought together local leaders and the private sector pledging accelerated action to meet the goals of the Paris Agreement, a 2015 accord aimed at keeping rising global temperatures in check. 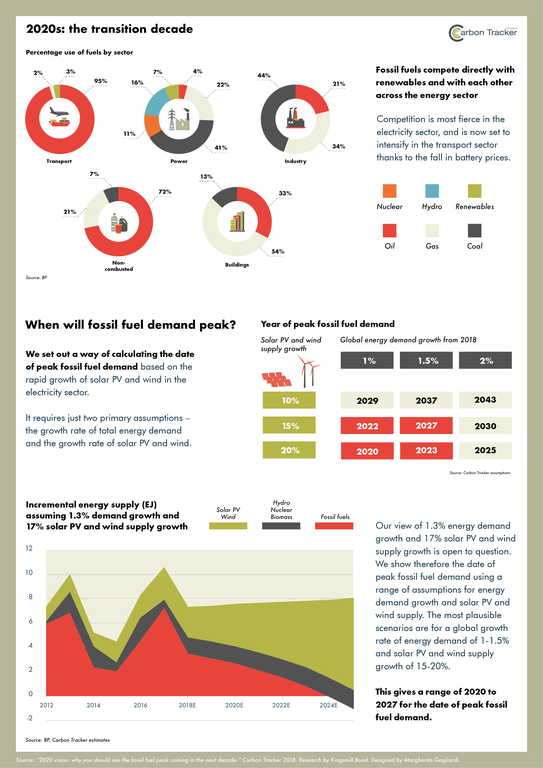 Stagnating demand for coal, gas and oil is being driven by three factors, the report finds. The first is that rapidly declining costs for solar photovoltaic, wind, and battery storage have made them able to compete with fossil fuels when subsidies are removed.

According to data from the International Renewable Energy Agency (Irena), the average global cost of wind-generated electricity has fallen from nearly $150 per Megawatt hour (MWh) at the start of the century to under $60 today. The average global cost of solar electricity has fallen from $350 per MWh in 2010 to $80 in 2018, with auction results indicating it will fall to $50 by 2020.

In India, for instance, the cost of solar electricity has fallen over the last 12 months to $36 per MWh, a level well below that of new coal-fired power stations. By 2020, renewables will be cheaper than fossil fuels in every major region of the world, according to Irena. 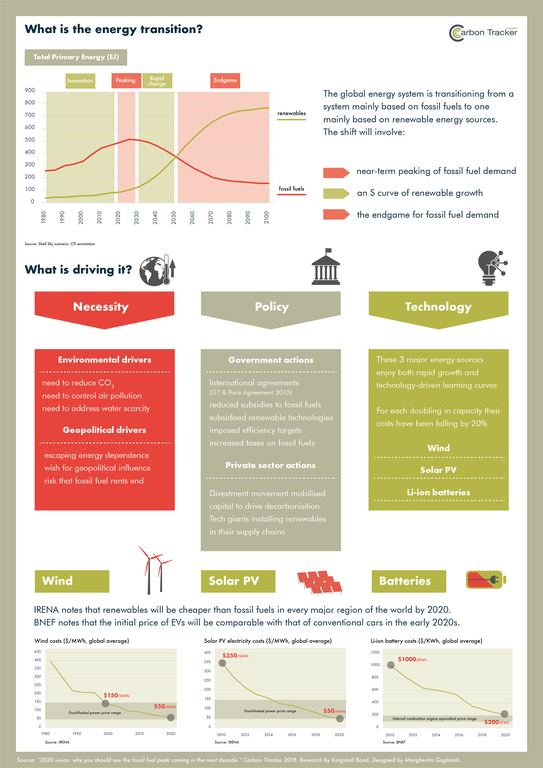 Second is that emerging economies, which are leading growth in energy demand, are choosing renewables over fossil fuels. According to Carbon Tracker, that is because these countries often have less fossil fuel infrastructure in place and are keen to offset rising pollution caused by growing energy needs through the use of renewables.

The International Energy Agency predicts that 27 percent of energy-demand growth in the next 25 years will come from India, and 19 percent from China. Yet both countries are already choosing solar and wind over fossil fuels. China overtook the United States as the country with the largest capacity for solar and wind power in 2012, then electric cars in 2016. 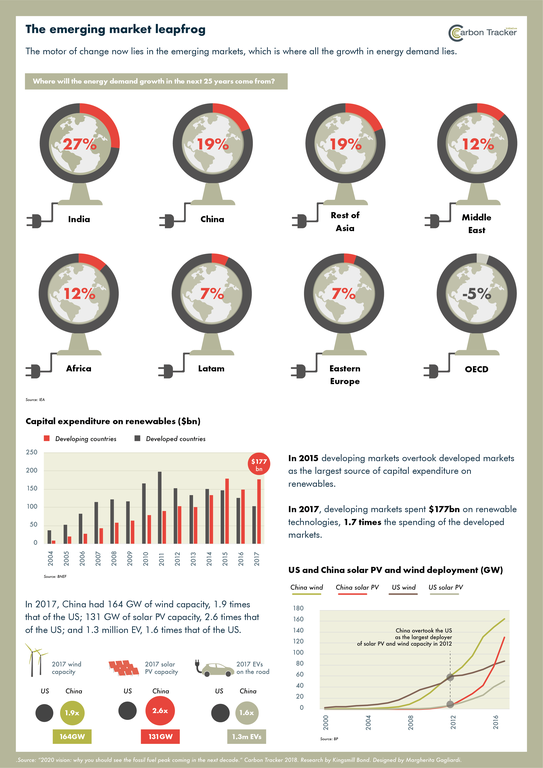 “The need to limit carbon emissions, the desire to breathe clean air, and the drive for energy independence all mean that global regulatory pressure on the fossil fuel industry will only increase,” Bond said.

But the peak in fossil fuel demand will greatly impact financial markets. The fossil fuel sector has invested an estimated $25 trillion in infrastructure, and the fossil fuel and related sectors comprise a quarter of equity and debt markets, according to Carbon Tracker’s report. Peaking demand for fossil fuels will mean falling prices, rising competition, sector disruption, and stranded assets, it added. 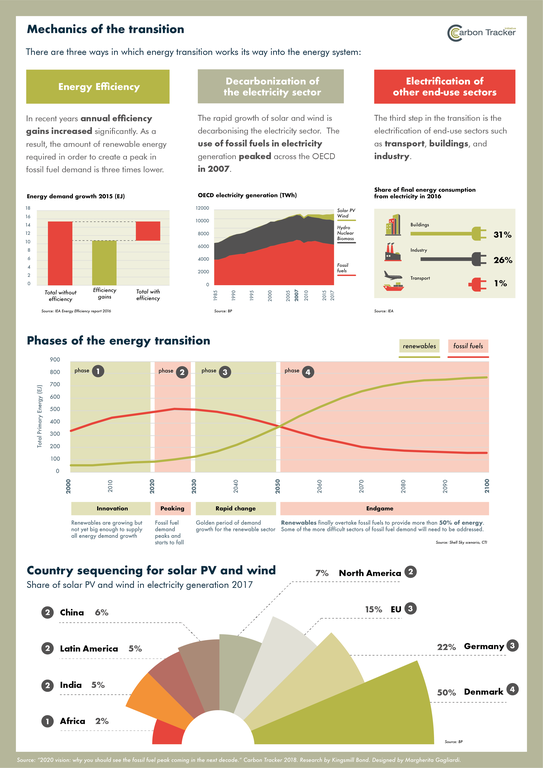 “We have seen a similar pattern in many energy transitions, from electricity, coal, and cars in recent years to horses and gaslights in the past. Demand for incumbents peaks early, and investors in incumbents lose money early on,” Bond said.

That doesn't mean they'll lose out in the long run, however.

“We believe that investors will start to react faster as the energy transition works its way through the world’s capital markets," Bonn added. "As each sector is impacted, it becomes easier for the market to anticipate something similar happening to the next sector." 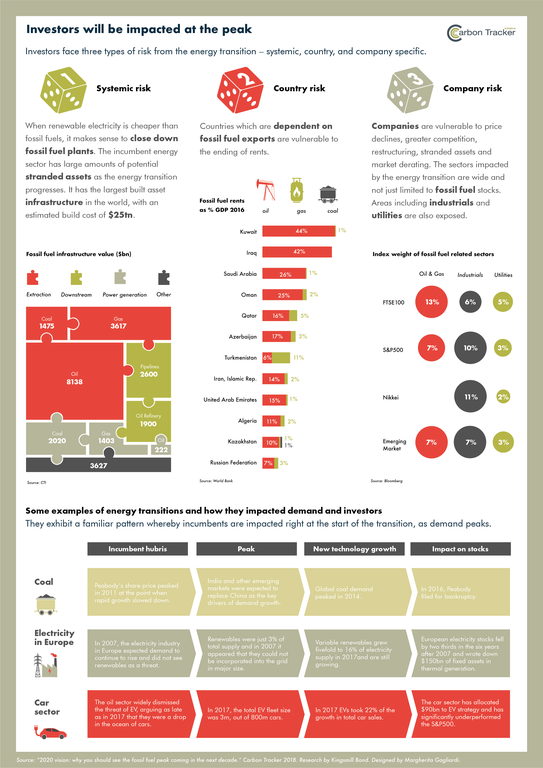