Frequent policy changes discouraging new rooftop solar installations have slowed down the pace of growth in the Indian state of Tamil Nadu.

In the second half of 2020, K Ganesh, a small business owner near Dindigul, invested close to Rs 5 crore to set up a megawatt (MW)-sized rooftop solar unit at his factory. The project was part of his long-term plan to shift away from state-owned power utility and it’s ever-increasing tariffs for industrial customers to a greener energy source within his mill’s premises.

“We are a high-tension consumer and we are solely dependent on Tangedco for power supply,” Ganesh told BusinessLine. “I invested in the unit assuming a 5-6 year payback period and 15% annual savings in our energy costs. The capital I invested can also be used as a tax write-off over this period.”

However, the state electricity board’s reluctance to approve new rooftop solar projects this year has left his plans in limbo. 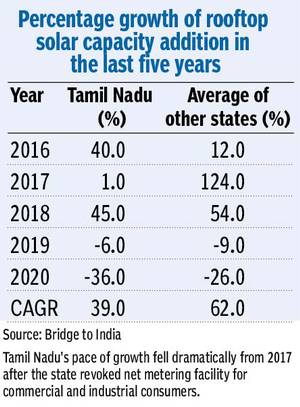 “The approvals from Tangedco (the state power utility that is a subsidiary of Tamil Nadu’s electricity board) have been pending for eight months now; so my capital is stuck as long as the approvals don’t come through,” Ganesh said. “We don’t have any alternative to Tangedco for power supply and I don’t know if their reasons for not approving are commercial or political. Our application has not been rejected; there is just no decision yet.”

Uninterrupted power supply, depreciation write-offs and prohibitive commercial tariffs for electricity appear to be the primary reasons that businesses in Tamil Nadu want to shift away from their dependence on state-owned power utility Tangedco and install their own private generation units. The simplest way to do this is to set up a rooftop solar unit within the business premises but, like Ganesh has learnt the hard way, it’s also where the state’s established electricity hierarchy is least willing to relent.

Rooftop solar units are a form of distributed power generation where homeowners, factories or businesses can set up solar panels on their roofs or on adjacent open space to provide a portion of their electricity needs, separate from the electricity otherwise supplied to the building from the regional grid. The central government has set an all-India target of 40,000 MW of solar rooftop to be set up by 2022. India’s capacity, as of December 2020, stood at a fraction of that — roughly 6700 MW.

Tamil Nadu was an early mover in the renewables energy space, leading the race with industrialized peers such as Karnataka, Gujarat and Maharashtra in incentivizing the first flush of solar and wind power installations. However, in the last few years, the state has begun to pull in the reins on its early enthusiasm and has dropped rankings in the leaderboard of annual capacity addition in renewables.

In addition, Tamil Nadu currently has more restrictive policies on setting up rooftop solar units that interact with the state grid, aggressively slashing financial incentives for Tangedco’s customers who may wish to set up their own private generation.

As of last December, Tamil Nadu has a total installed solar rooftop capacity of 537 MW, of which 75% is industrial, 19% is commercial and 6 per cent is in the public sector, according to data from Gurgaon-based renewable energy consultancy firm Bridge to India. While the state built an early lead in adding capacity, recent data shows that frequent policy changes discouraging new rooftop solar installations have significantly slowed down the pace of growth. These policy flip-flops fly in the face of the state’s own target to set up 3600 MW of rooftop solar by 2023.

“Tamil Nadu lost the lead (in rooftop solar) in 2017 because net metering was not offered after 2016,” said Vinay Rustagi, Managing Director, Bridge to India. “Currently only net billing is available to low-tension consumers (below 112 kW) and there is no grid connectivity provision for high-tension consumers.”

Net metering and net billing are two ways to calculate compensation paid to private rooftop solar units that sell their excess private power generation to the grid using a bi-directional meter. In the net metering arrangement, the producer-consumer (pro-sumer) can can subtract the energy they sell (in terms of units) to the grid from the number of units that they buy. The difference between these two figures is billed according to standard slab rates. Under the net billing arrangement, the pro-sumer sells their excess energy to the grid at a standard feed-in tariff while the energy they buy will be charged at slab rates. Given the vast difference between the feed-in tariff (mostly under Rs 2 a unit) and the slab rates, the savings for pro-sumers are far lower under net billing than under net metering.

“Tamil Nadu has an ambitious rooftop solar capacity target and the state has attractive radiation and a high demand from commercial and industrial consumers to set up rooftop units. But progress is limited due to these unhelpful policy measures,” Rustagi said.

The state’s reluctance to approve new rooftop solar projects, despite recent orders from the the electricity regulatory commission (TNERC), has hit industrial users — who pay the highest tariffs — particularly hard. If Tangedco’s cost of power supply per unit averages at Rs 8.20/kWh (kilowatt hour), it needs to charge high-tension industrial customers as much as Rs 11 or 12 per kWh to offset low tariffs to residences or free power to agricultural users.

Despite repeated requests, the chairman of the state’s electricity board has declined to respond to BusinessLine’s queries. However, data from the Ministry of Power gives some clues as to why Tangedco’s has shied away from embracing private generation of green power.

As of June, Tamil Nadu’s power utility has the highest backlog of unpaid dues (Rs 18,370 crore) that it owes its primary large-scale power generators, compared to the rest of the country. The state also ranks at the bottom in terms of ease of payments to generators. For a utility already struggling to pay its creditors, losing any business from high-value bulk power customers, like those in the commercial and industrial categories as they switch to rooftop solar would only exacerbate its own financial troubles.

Face-off with the regulator

Last month, the TNERC directed Tangedco to process all pending applications from high-tension industries for setting up rooftop systems. Tangedco, however, took this dispute further to the Madras High Court.

“Tamil Nadu is very unique in not allowing high-tension consumers the option of net metering, where they can export surplus power to the grid. If you don’t have this facility, a lot of the energy generated is likely to go waste,” KR Harinarayan, Founder, U-Solar Clean Energy, which works as an engineering, procurement and construction contractor with solar rooftop customers across several states, said. “As a result, even though Tamil Nadu has lots of industries and companies with high power requirements and the capital needed to set up rooftop units, many are reluctant to do so. Only industries that can absorb all the power generated through the year, like those which operate 24*7 like spinning mills or large auto companies, find rooftop a viable option here.”

Aside from this, the inordinate delay in approvals has reduced the appetite for new installations. “No high-tension approvals approvals have come from Tangedco this year due to the case they have brought before TNERC,” Harinarayan said. “As a result, even when customers come to use asking to set up rooftop now, we are advising them to wait till there is some clarity in policy. However, we are optimistic that this issue will be sorted out soon.”

Things are beginning to look up though, after the recent regime change in the state. “With the new government in place, we are hoping that some of the restrictions on grid-interactive solar energy will be resolved soon,” P Ashok Kumar, President, Tamil Nadu Solar Energy Developers Association, said. “This week, the TNERC has published draft guidelines that will allow net metering facility for residential rooftop units up to 10 kW, which is a big benefit for small-scale users. There are also some concessions for low-tension commercial and industrial users with solar rooftop as long as they pay a Rs 1.27 per kw/hour networking charge to Tangedco. Given these new guidelines, I believe there is scope to work further with the government for finding some resolution for high-tension customers as well.”

Even as demand in the commercial and industrial categories falling, some contractors are seeing an uptick in residential demand for solar rooftop in Tamil Nadu, JB Sathishkumar, proprietor of Kanchipuram-based Dynamic Power Systems said. “Post-Covid, now that so many people are working from home, there’s a lot of demand for uninterrupted power supply at residences and small business. I’ve been selling rooftop systems for households for 12 years in Tamil Nadu and I did the most business in 2020.

“Setting up grid connectivity with solar is complicated. Customers who used to sell excess power to the grid found that they receive average of Rs 1.8 to Rs 2 a unit, depending on the lowest bids for that day pan-India. So that’s not helpful if your cost of power from the grid is Rs 6-7 a unit. Instead now, most of my customers are opting to include battery storage with their rooftop units, even though this makes the whole set-up more expensive initially,” Sathishkumar added. “Customers generally install 1-5 kW units, based on their energy usage, the number of appliances etc, It can be difficult to get a bank loan to set up these units, but customers who can afford the upfront cost are taking this route more and more now.”

P Suresh, a resident of a south Chennai suburb, installed a 3 kilowatt rooftop solar unit backed with batteries at his bungalow, where he runs a business consultancy firm from the top floor. “I thought setting up a solar unit would be more economical than just using an inverter to last through the power cuts,” he told BusinessLine. “I get about six units of power a day; it’s not a lot but the lights, fans and internet at my office don’t go off during a power cut. The benefit for me is that because it’s an asset of the company, I can write off the capital cost over its lifetime.”

This story was produced with the support of Internews' Earth Journalism Network and was originally published by The Hindu BusinessLine on 26 August 2021. It has been lightly edited for length and clarity.

How Will China's Economy, Politics and Daily Life Be Reshaped by a Dramatic Emissions Reduction Campaign?
© 2023 Earth Journalism Network All rights reserved.