Rice over rights? Controversy over Chinese-backed dam in Myanmar heats up

Rice over rights? Controversy over Chinese-backed dam in Myanmar heats up

When Daw Nan Ja and her family were forced from their home 10 years ago, she was well on her way to saving enough money to send her youngest son to college.

Like two-thirds of Myanmar people, Daw Nan Ja lived in a village on the banks of the Malikha River that lacked electricity, but fishing and farming provided livelihoods they could depend on.

Now, shouldering a large basket that dwarfs her 50-year-old, four-foot frame, Daw Nan Ja describes how she walks five miles and back to collect Phawkwephwe, herbal leaves she sells to buy food that once used to grow right outside her front door.

This enterprise is among the more recent pursuits she’s turned to since the arrival of China Power Investment Corporation (CPI).

In December 2009, this Chinese state-owned company and Myanmar’s military government finalized an agreement to allow China to use Daw Nan Ja’s family’s ancestral Kachin land as the site for the 6,000-megawatt Myitsone hydroelectric dam. In exchange, Myanmar would receive 10 percent of the electricity generated by the project. 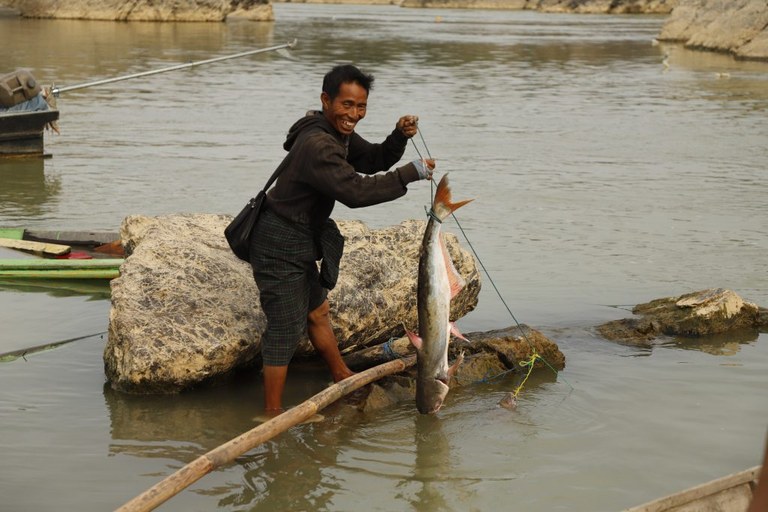 Bounty like this from the Malikha River is much harder to come by now as their new village is far away and gold mining has been allowed to proliferate / Credit: Seng Mai

More than 2,500 people spread across five villages identified as being within the dam’s construction site would have to move. The government had allowed preliminary work at the site since 2006, so Daw Nan Ja and others were already aware of what may lie ahead.

She was informed that a new, modern village would be built high up on the opposite side of the river and that two acres of farmland would be allocated to each family.

Not mentioned, however, was that this resettlement village, named Aungmyinthar, was to be located on the ancestral lands of another long-standing community.

We just want to grow food

The plan appeared hastily conceived and flawed from the start, says Daw Nan Ja. Only after the government forced the closure of their schools and churches did she and her fellow villagers concede their fate.

Daw Nan Ja felt like an invader herself when she arrived in Aungmyinthar village. While the locals could do little about the land already consumed by the newcomers’ homes, they resisted relinquishing the promised farmland, giving the new residents no place for their cattle to graze. 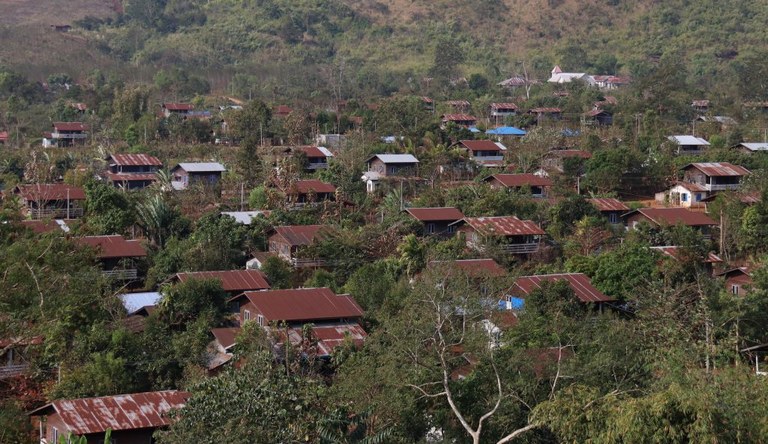 Lacking money to purchase fodder, many of the displaced returned their cows and buffaloes to their old pastures near the dam site. Not long after, however, the animals began to disappear, says Daw Hkawng Nang, another resettlement victim. Her cows went missing and she believes some 200 hundred animals from her village were killed and eaten by the project’s Chinese security personnel.

Four attempts were made to obtain comments from CPI representatives at their office in Myitkyina town. The only responses received from public relations staff was that they were “Too busy” and “Come back another time.”

In addition to the tensions over farmland, Daw Nan Ja said efforts made to cultivate tiny plots within and around the new village proved difficult.

“The soil was red and hard. Even when fertilizers were applied, productivity remained low,” she said. The only thing that grew, she added, was “hardship and frustration.”

Families were being torn apart, said U Mong Ra, who has emerged as a vocal opponent of the project. “There were no job opportunities, many women migrated to China to work as masseurs, and very few young are around.” 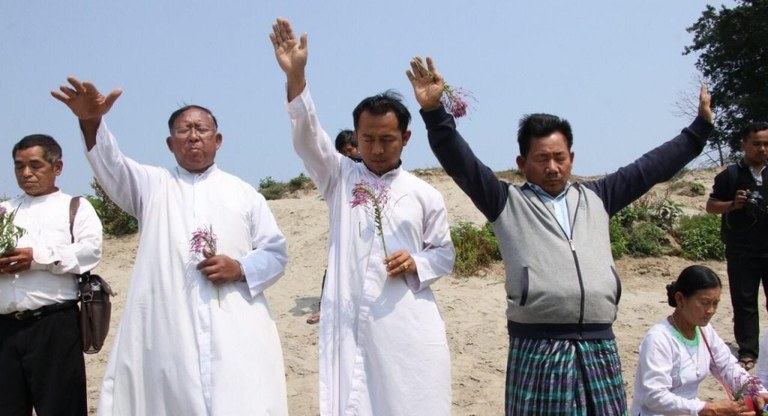 U Mong Ra (standing at right) with religious leaders at a protest against the Myitsone dam in Myitkyina, capital of Kachin state, Feb. 7, 2019 / Credit: Seng Mai

The plight of those who were resettled fueled local protests against the dam, especially since another 13,000 people would require relocation as their villages would be flooded by the dam’s proposed reservoir.

The Myitsone Dam would block the confluence of the Malikha and Maykha rivers, where the Ayeyarwaddy River begins. The Ayeyarwaddy is the biggest river in Myanmar and revered as the source of hope and life for people. It is estimated that 34 million people’s livelihoods and well-being, two-thirds of Myanmar’s population, depend on the Ayeyarwaddy watershed in its natural state.

“The Ayeyarwaddy is the main artery of Myanmar, if it is touched, all will be in trouble. That is why we squarely oppose the plan”, said U Tsa Ji, general secretary of Kachin Development Network Group.

Nobel Laurette Aung San Suu Kyi, then-leader of Burma’s pro-democracy movement and now State Counselor in Myanmar’s three-year-old elected government, was among those demanding a halt to the project. 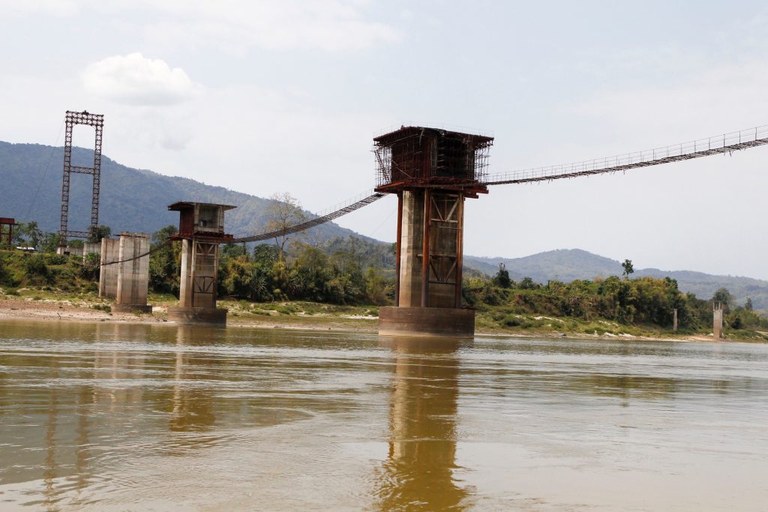 Pillars for a bridge planned as part of the Myitsone Dam project remain untouched since the project’s suspension more than seven years ago / Credit: Seng Mai

Those still residing in Aungmyinthar village viewed the announcement as a chance to return home. Even if they could not reside there, improved food security and a reliable source of income could be attained by tending to their old fields.

Just five days after Thein Sein announced the suspension of the dam due to the, “will of the people,” he then told local authorities to prepare for large-scale gold mining to begin in and around the same site.

Daw Nan Ja said that migrants had already been unofficially permitted to conduct small-scale mining near her old village. The mining was harming the land and the water, but some areas might still be suitable for farming, she had hoped.

Daw Lu Ra, who has been organizing opposition to the dam, said the government and CPI, are not interested in helping those affected.

“They are only interested in controlling us or splitting us apart,” she said.

Daw Ja Hkawng, who has emerged as a major leader among the locals, said CPI began handing out free rice each month to those in the resettlement village since they could not grow food. It now comes with a catch, however: those, like herself, identified as working against the project are denied. 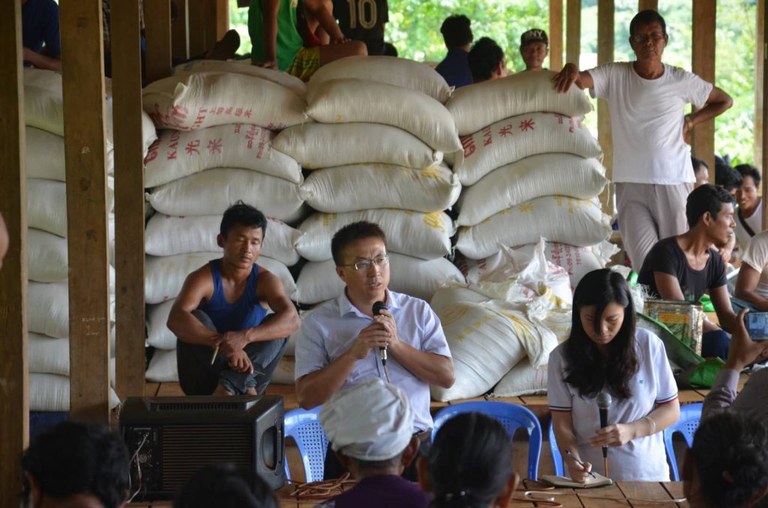 Last December, after work on the dam had been suspended for more than seven years, news surfaced that construction may be allowed to resume, and Daw Ja Hkawng led locals to speak out vehemently against it.

They were particularly aghast by Chinese embassy statements claiming that local residents were not in opposition to the project.

“They talk as if they know nothing about our protests. We stood clearly against it – by sending letters to the government again and again and holding press conferences in Yangon and Myitkyina,” Daw Ja Hkawng explained. “We also did protests against it in [the] Myitsone area, but they did not consider us and acted as if they did not know we are against it.” 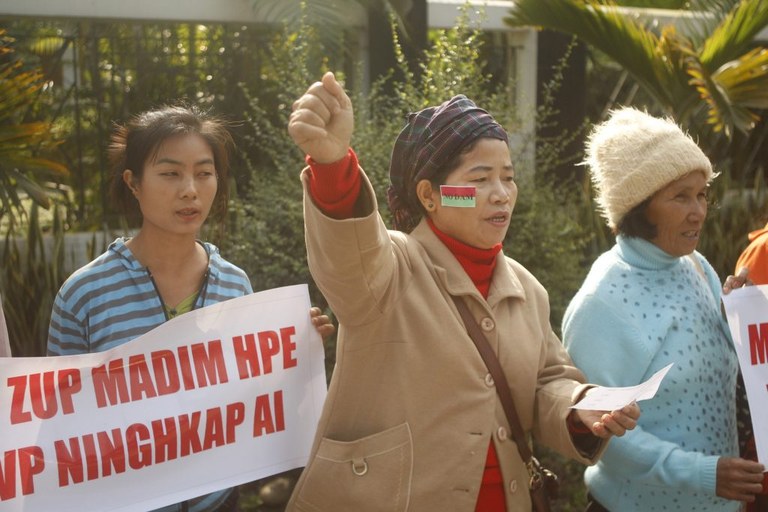 The statements by those affected are unambiguous, she points out: people were forcefully relocated to another village, they became internally displaced people, they no longer have farmland nor viable livelihoods, and as a result, CPI must take responsibility for assisting those affected until the Myitsone dam is cancelled.

“We residents don’t want the dam and will always stand against it. It’s our duty to the generations to come. We will protest against it until we die,” said Daw Ja Hkawng. 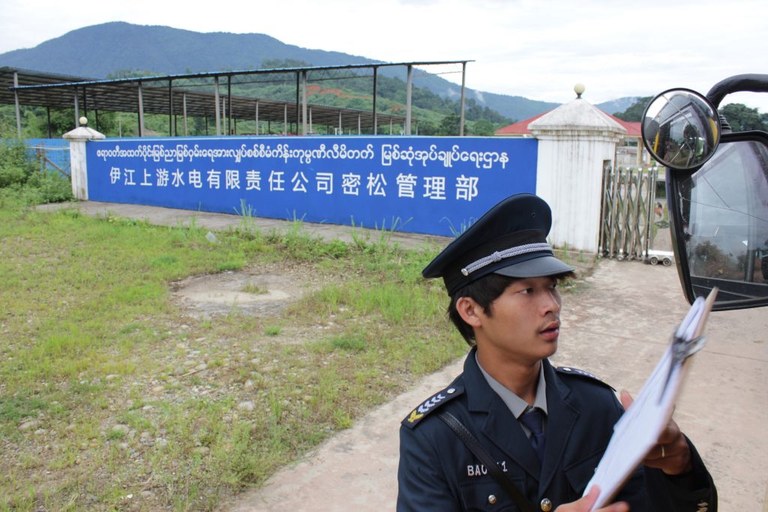 Tight security is maintained in and around the Myitsone Dam site / Credit: Seng Mai

U Mong Ra says international organizations seem to know little about residents’ terrible living conditions or how China tries to use them to promote the dam project.

He points to increased efforts by CPI to make donations to churches during Christmas and New Year events and the completion of a livelihood-training building where a three-month course in weaving has been offered.

“Our people are farmers, and none of this helps us replace lost livelihoods,” said U Mong Ra. “The Chinese show off a lot with their work in the villages so that they can take pictures and spread misinformation. This is what the international organizations see,” he added. 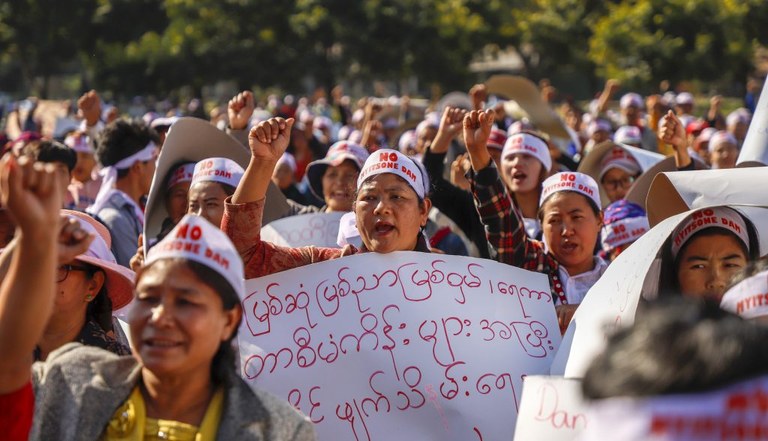 With few other prospects to fend for themselves, however, and CPI’s increased presence in the village of late, U Mong Ra accepts that an increasing number of people may feel compelled to quiet their criticisms and rely primarily on Chinese aid to get by.

“Our problem is our survival, our need of food,” he reiterates.

Setting down her heavy basket, Daw Nan Ja says her collected Phawkwephwe leaves are now her greatest source of income. But this, too, will be short-lived.

“Other villagers are now coming to cut the leaves,” she said. “The forest will quickly run out. I don’t know what I will do then, but I certainly won’t be hanging any picture of my son receiving a college diploma.”

Pacific Islands
The makings of a climate change resistance in the Pacific
© 2022 Earth Journalism Network All rights reserved.