Mekong Eye traveled to Eastern Thailand to observe how China’s demand for durian is affecting farming communities and the fruit’s genetic diversity. This report is produced along with a Thai-language story, “สำรวจโลกความหลากหลายทุเรียนไทย: ความเสี่ยงภายใต้โอกาสทอง“, as well as two video reports, “อนาคตทุเรียนไทยใต้ทุนจีน”  and “จับชีพจรทุเรียนพื้นถิ่น” posted on Bangkok-based Yor Lok News. 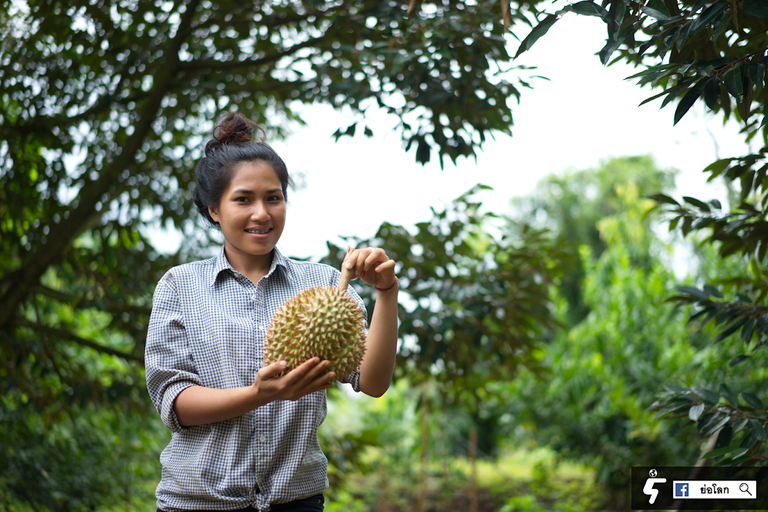 While enjoying the historically high price for the fruit of her hard labor, durain farmer Thanaporn Chuntopas suspects the deals with her Chinese buyers are too good to be true / Credit: Nattaporn Taotogoo

Monthong means golden pillow in Thai, but to the Thai farmers cultivating this rich, creamy and sweet tasting variety of the world’s most pungent fruit, Monthong durians just mean gold.

China’s burgeoning middle class has taken a liking to what Southeast Asians call the King of Fruits, and their appetites are now being fed via rapidly evolving transportation infrastructure within the Mekong region that delivers it to Chinese markets to sell for up to US$60 a piece.

Last April alone the total value of Thai durian sales was recorded at US$220 million, an increase of 207 percent from the year prior. In a single minute, Alibaba Group’s Tmall.com sold 80,000 Monthong durian to Chinese consumers, and its rival JD.com moved 428,000 kg of the Thai delicacy in one day.

Chinese traders are increasingly prevalent in Thailand’s durian-producing east, where farmers are abandoning other crops to cash in on the durian bonanza. This dynamic, however, is exposing huge risks fueled by poor foresight in Thailand’s agricultural policy, which in the end may put farmers deeper in debt and further weaken the country’s agricultural potential as it ebbs and flows with the Chinese market.

Thailand has long been the world’s leading durian producer, with exports now rivaling domestic consumption by a factor of 5 to 1. China receives up to 90 percent of Thai durian sent abroad. This has largely been aided by a unique agreement Thailand has with China, making it the only country authorized to import whole, fresh durian into Chinese markets.

“Last year, the durian price was set at 80 baht/kg, but it went up to 110 this year. They (China) took everything. We only have a little of what’s left from them,” says Tossapol Mangsachat, an owner of durian roadside stall in Bangkok’s Yaowarat or China Town neighborhood. 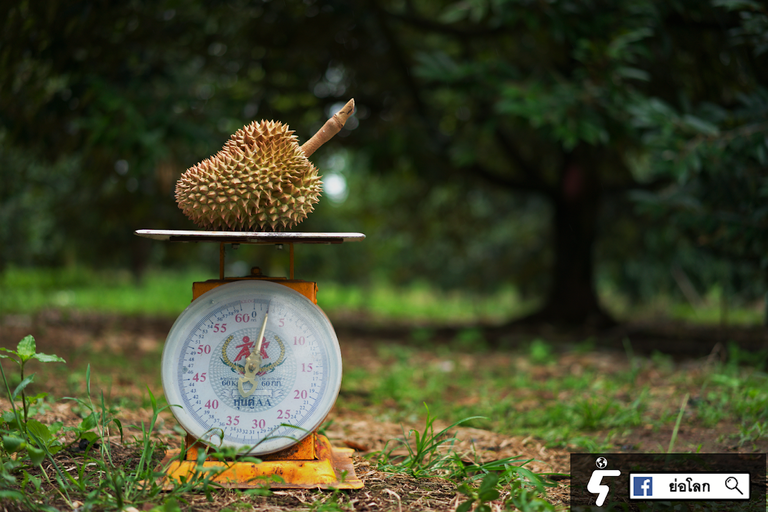 It’s the seller’s market when it comes to Monthong, the most sought after variety by Chinese consumers / Credit: Jompol Daosokho

Though this has been a boon for many small-scale farmers, China’s dominance over supply chains has made farmers nervous about the potential to fix prices and reduce incomes.

The rising prices are nonetheless causing many farmers to convert rambutan and rubber plantations to durian. The Department of Agricultural Extension reports that the number of durian orchards in Chanthaburi province have jumped considerably in the past year. The data also shows that most of the cultivated areas are Monthong varieties, which could lead to excessive supply over the next five years.

Piti Srisangnam, the director of academic affairs at the Asean Studies Centre, Chulalongkorn University, plays down concerns over a Chinese monopoly in Thailand’s agricultural sector, saying this is merely the way Chinese and other foreigners typically leverage new market opportunities here. Thailand itself should be looking deeper into how its agricultural sector could penetrate other markets located along the Belt and Road Initiative (BRI) routes, he says.

“As long as it is about pushing more connectivity, that means China is our biggest export market and there is a way for us to be connected through roads, rails or even boats to this huge market,” Piti says.

But this connectivity works for other countries as well. Malaysia, which also cultivates durian just opposite its shared border with Thailand, hopes that next year China will be granting it clearance to also import fresh durian. Farmers there have already been planting new orchards in the hopes that such an agreement will be forthcoming. Cambodia and Indonesia too are also eager to enter the market. After all, durian is a regional fruit and many countries could soon be feeding the Chinese demand, jeopardizing returns on new Thai durian investments.

Dr. Songpol Somsri, the senior advisor at Thailand’s Department of Agriculture, says that durian has been cultivated for commercial purpose in Nonthaburi province for generations. Up until recently, there were hundreds of different species grown, offering a variety of different flavors and textures. The native species can be divided into several groups: Kaan Yao from Thong Sook, Chanee from Luang, and Thong Yoi and Monthong from Kum Pun.

Now, however, only a few species are commercially grown, Chanee, Kaan Yao and Monthong among them.

Monthong is the variety most exported from Thailand to China, not only because it fascinates the Chinese market, but because it can be kept under suitable conditions after picking, around 20 days without turning mushy or spoiling.

According to the Department of Agricultural Extension, Monthong accounted for 89 percent of all the cultivated durian areas in Thailand, followed by Chanee with 7 percent and the remainder including Kra Dum, Kaan Yao and Puangmanee. 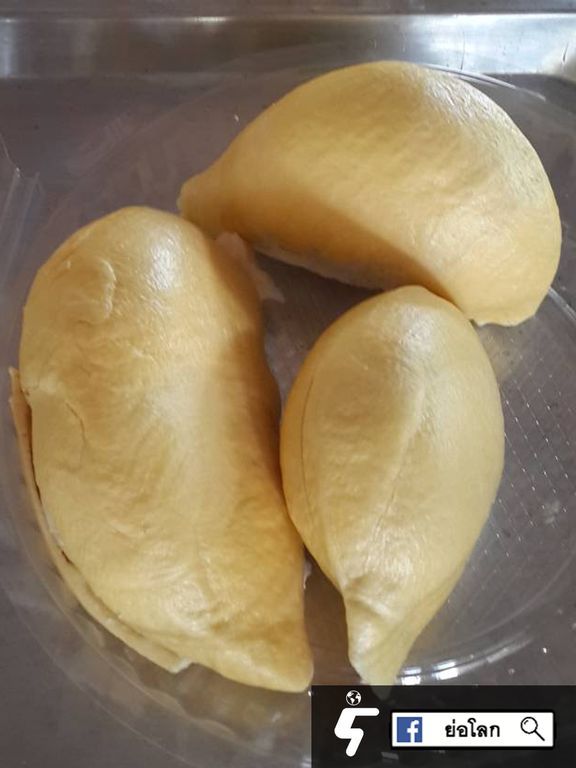 Nok Yib variety is increasing popular among consumers who are looking for diversity of taste and texture.

“Monthong is not that strong. Worms eat it, even though the trees are injected with chemicals every year in anticipating of these attacks. Worms like Monthong so much because it is creamy and its outer shell is not that hard. Other indigenous durian are stronger. They grow taller and we do not need to use pesticide to protect them from worms,” the farmer says.

Part of the problem says Kingkorn Narintarakul na Ayutthaya, deputy director of the BioThai Foundation, is that monocropping renders plants more prone to diseases and they are more easily destroyed by extreme weather conditions.  “A single crop is very vulnerable, so chemicals, hormones and pesticide are greatly used in an effort to defend the crop from these factors. At the same time, these chemicals tend to destroy the surrounding ecology,” Kingkorn observes.

She emphasizes that cutting down trees to cultivate durians for commercial purposes harms plant genes, creates instability for farmers’ livelihoods and contributes to food insecurity over the long term.

“For example, the diverse fruit orchards in Nonthaburi province were bought and all the trees were cut down to cultivate Monthong durian. This has dramatically altered the soil composition. I do not think this practice is sustainable. Once people lose interest in Mongthong or the fruit is found to grow better elsewhere, we’re stuck with a severely degraded agricultural ecosystem,” Kinghorn predicts.

In Persuit of Diversity

Over the past few years, however, consumers both in Thailand and abroad have demonstrated interest in trying other durian species. This can be seen both in supermarkets and online where the fruit can be purchased directly from farmers, says Kingkorn.

She is optimistic about greater domestic demand for different durian varieties, which will diversify production. Cultivating a diversity of species is a significant element for sustainable agricultural development, making trees capable of surviving disease, climate change and better meeting the whims of consumer demand.

“This interest is not necessarily new, just untapped. People often wonder where all the native mangoes or durians have gone. The market took them away, and the market can bring them back, with all their different flavors and characteristics,” Kingkorn says.

Standing in his Num Sook (bring happiness) farm in Chanthaburi’s Klung district, Manop Amorn-aracha, a durian-orchard owner who grows both Monthong and other indigenous varieties such as Kaan Yao, Wat Sak, E-leep, Chompu Sri, E-kob, Thong Yib and Med Nai Yai Prang, says each species has its own distinctive feature. 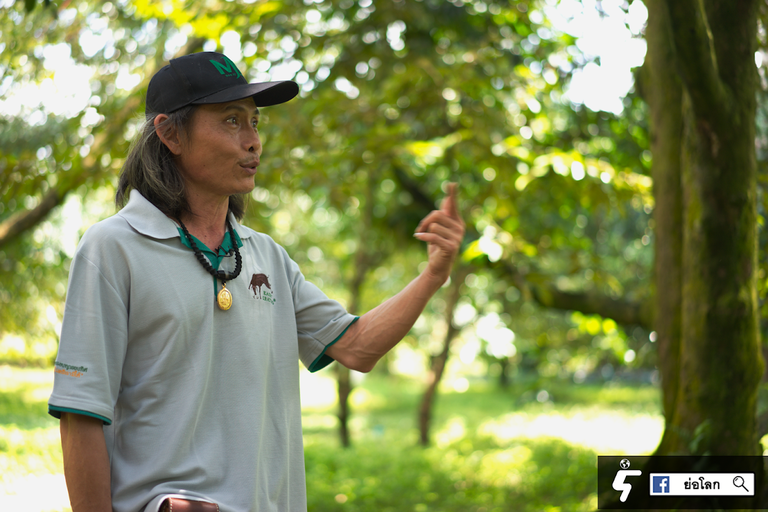 “For example, Chompu Sri has a good taste but is used to produce sweetened paste or syrup instead because it is very meaty,” says Manop.

Manop decided to cultivate a wider range of native durians to bring back what he remembered was available when he was a child. His family used to grow Kum Pun Thong durian. When their land was reclaimed, he took a tendril to transplant. He does not want these species to go extinct.

“So many durian species are almost gone, except Monthong, Kradum and Kaan Yao. Even Chanee is very rare nowadays,” Manop says, adding that the rare durian varieties from his farms are directly sold to consumers for up to 350 baht per kilogram.

“I think there would be high demand for these other indigenous durians. People only eat Monthong because when they go to most markets in Thailand, they only know Monthong. It’s time to get some other varieties,” advises Manop.

Thailand’s government could be far more proactive to ensure farmers here maintain a comparative advantage in the country's durian production, says Kingkorn. But so far it has remained fairly hands-off, other than to facilitate the current expansion of Monthong production.

Such shortsightedness has been pervasive for some time. Not many years ago, Kingkorn observes, Thailand was the leading exporter of rice, only to be overtaken by farmers in India and Vietnam. Charoen Laothamatas, president of the Thai Rice Exporters Association, says Thailand's “…failure to formulate long-term policies for the rice industry” is problematic and that the country should be perusing a greater range of diversity in production. So, not surprisingly, 2019 export forecasts are being scaled back due to intense competition from other countries.

“All Thailand does is wait and see what others are doing and allow them to come here for the taking. We should be driving the market for rich, diverse, and heathy agricultural products, produced equitably and sustainably. We have all the ingredients and farmers are more than ready, there’s just no political will,“ Kingkorn says.

This report is part of a series of stories looking at the social and environmental impacts of China’s Belt and Road Initiative in the Asia-Pacific region, supported by Internews’ Earth Journalism Network.

Philippines
Appetite for Sustainable Alt-Meat Growing, but a Bigger Push Is Needed in the Philippines
© 2023 Earth Journalism Network All rights reserved.