Rising salinity spells disaster for industry along the Karnaphuli

Rising salinity spells disaster for industry along the Karnaphuli

Other industries on the banks of the river as well as cropland fertility and fish farming are being hampered by saltier water.

Salinity in water up to 15 parts-per-million (ppm) is what the Chattogram Urea Fertiliser Limited (CUFL) can take to keep its production going.

But the Karnaphuli River, upon which the factory stands, is an extreme case in point. Its salinity during the dry season jumps to a staggering 5,800ppm.

The fertiliser factory now has to keep its production shut for longer periods because of the high level of salinity in the river water, its main input aside from gas and air.

This year, the CUFL, a major state-owned fertiliser company under the Bangladesh Chemical Industries Corporation (BCIC) had to stall its production for 72 days in a row from March to May.

Experts attribute this abnormal rise in salinity to the rising sea levels caused by climate change.

Other industries on the river bank are also facing severe setbacks in production, especially during the dry season from November to May, when salinity increases.

These industries largely depend on the river water for their production.

Coursing its way through the Chattogram City, the Karnaphuli has its origin in the Lushai hills in the Indian state of Mizoram and flows into the Bay of Bengal.

The CUFL is the only company in the area that measures salinity of the river water almost every hour, looking for usable water with salinity below 15ppm.

It collects around 18-20 million litres of water per day for production.

The company loses around Tk4 crore a day for each day it has to suspend production, officials have said. During the 72-day closure this year, the losses reached around Tk288 crore.

Japan's Toyo Engineering Corporation set up the CUFL factory in 1987. It built the water collection point 30 kilometres upstream at Kalurghat to have an uninterrupted supply of sweet water, since water in that area was virtually free from salinity.

But the water upstream has now become saline as well, hampering the livelihoods of people living nearby who depend on the river.

In 1987, the highest salinity levels recorded in Kalurghat were only 2ppm.

"But now it reaches around 5,800ppm during low tide and dry season. In recent years, we could collect water only for four hours a day during high tide," said Abdur Rahim, managing director of CUFL, who also managed the company's water treatment plant in the early days of his career.

In 2003-04, when the company was running full-scale operations, it had to suspend production for the first time due to high salinity levels. That year, production was suspended 18 times for 39 days for different reasons and salinity was one of the major problems, according to a company report.

Though the factory has had to suspend production for different reasons, including high salinity levels, over the last 15 years, this year was the first time it had to do so for a longer period of 72 days.

"We may [not] be able to run the factory for over 10 years like this if we have to depend on the Karnaphuli water," Rahim said. "We fear that after 10 years salinity will constantly be over 15ppm, be it during low tide or high tide or rainy season or dry season."

Binoy Paul, master operator at CUFL, has been measuring chloride in the Karnaphuli water for the past 33 years. He told The Business Standard, "Salinity has been increasing every year with the rise in sea levels. Salinity also increases if there is a natural disaster, such as a cyclone. Salinity is low during the rainy season and high tide."

After collecting water from the river, the company categorises it into filtered water and demi water. From the filtered water, it gets cooling water, fire water and potable water. Demi water, on the other hand, is used in the boiler to make steam for urea production.

"Now, we are looking for sweet water. We contacted Chattogram Water Supply and Sewerage Authority and they assured us of providing 10 million litres per day within a few years. We have four deep tube wells, but we do not use those as they deplete groundwater levels," Rahim said. 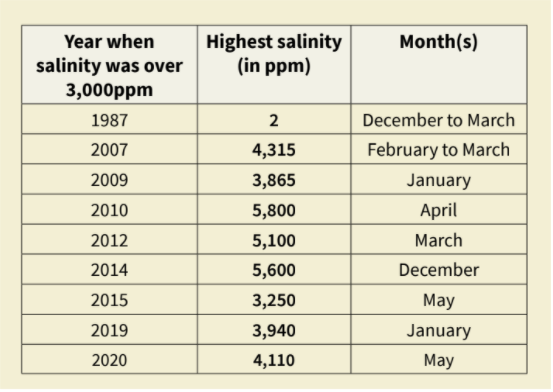 Because of the unwanted suspension of production, CUFL has hardly been able to achieve its yearly targets, forcing Bangladesh to import more fertiliser.

DAP Fertiliser Company, another BCIC factory, is also heavily affected by high salinity levels as it collects around 10 million litres of water every day from the Karnaphuli through the CUFL.

The Wasa water treatment plant at Mohara, at the estuary of the River Halda near the Karnaphuli, is also facing severe setbacks.

"We cannot supply water to city residents if the salinity is above 200ppm. During the dry season, or low tide, we have to mix ground water with the river water to make the water drinkable," said AKM Fazlullah, managing director of Chattogram Wasa.

"In 2018, we had to make an announcement in daily newspapers asking people not to drink our water," he added.

Dr. Muhammad Edris Ali, a Karnaphuli researcher and chemistry professor at the government Hazi Muhammad Mohsin College, told The Business Standard, "There are 350 small and big industries on the banks of the Karnaphuli. Most of them somehow depend on the river water. Some industries collect water for production and some for personal use; they all are suffering because of high salinity.

"Moreover, the amount of sweet water which is supposed to come from upstream does not come to the river. The increasing use of river water and dumping of waste are also making the water saline and polluted," he said.

"The agricultural lands in five upazilas are losing fertility while fish farming is getting tougher because of the salinity in water," Edris Ali added.

AKM Rezaul Karim, a climate change expert and author of "Climate Change and Environmental Planning," said, "The increasing salinity in Karnaphuli water is the impact of the rise in sea levels caused by climate change. High salinity is found from the Karnaphuli estuary [the Bay of Bengal] towards upstream until the mouth of the River Halda, a 55km stretch."

This will increase with rising sea levels, he said.

To address the problem, Karim, who is also the chief city planner of Chattogram City Corporation, said more action was needed.

"We have to formulate an adaptation policy," he said. "For example, we have to build water reservoirs for keeping rainwater or sweet water."

This story was originally published on The Business Standard on 13 September 2020. It has been edited for clarity.