This is the last article in a four part series. thethirdpole.net’s Nepal Editor Ramesh Bhushal and photographer Nabin Baral travelled along the tributaries of the Koshi River from near Tibet to the Indian border to report on the challenges faced by people living in the region.

All rivers in the Koshi basin lead to the Ganga. The major rivers  the Sunkoshi, Arun and Tamor travel hundreds of kilometres from the glaciers in Tibet and meet at Triveni, 20 kilometres before the foothills peter out into the southern plains of Nepal.

For people living on the plains of Nepal and northern Bihar in India, the Koshi is both best friend and worst enemy. The rivers flowing down from the Himalayas irrigate the fertile plains, but they can also be hugely destructive. Some researchers claim that the Koshi has shifted about 115 kilometres west in the last two centuries, though others refute this. The river’s capricious behaviour has made the region more vulnerable to floods, which have displaced millions in recent years. 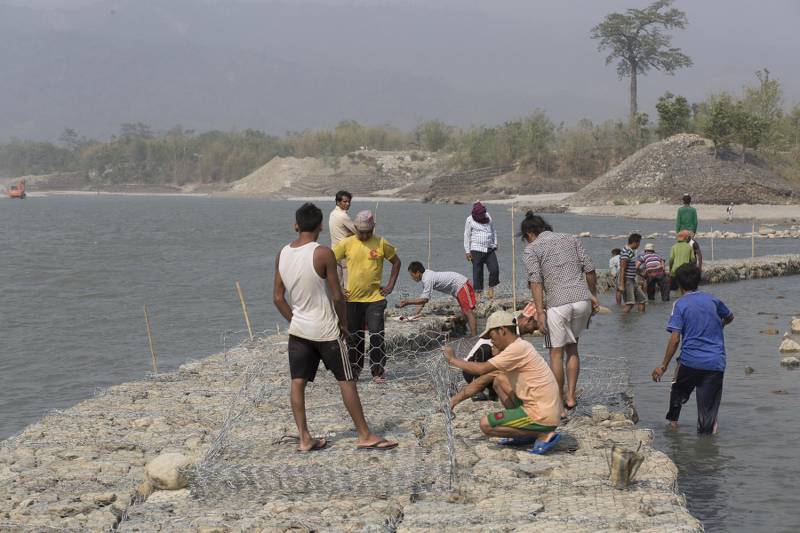 Workers rebuild a vulnerable old wall to protect villages from floods at the Koshi Barrage in Sunsari, Nepal [image by Nabin Baral]

In August 2008, one of the most devastating floods in South Asian history occurred when the Koshi breached its banks near the India-Nepal border and affected more than three million people in Nepal and India — mostly in Bihar. It took five months for authorities and locals to push the river back into its channel. Farmers are still struggling. The floodwaters carried sand that has enveloped their farms, and they are unable to grow anything.

In the scorching sun of mid-April, Rashik Lal Mandal is busy ploughing his sand laden field with a large spade. He lives in Sirpur village, a few kilometres from the Koshi barrage at the international border. Most of the land here has been infertile since the 2008 floods, but a few cultivators like Mandal have rented the fields to produce vegetables like pointed gourds, known locally as parwal, which need sandy soil.

Mandal comes from Bhagalpur in India, the city just upstream of the point where the Koshi flows into the Ganga. He says in his native area it is common to shift to other crops like parwal when the farms get flooded.

As we are talking with Mandal, local resident Manoj Kumar Yadav walks over to tell us how he and his family have suffered due to the Koshi flood. His field was completely submerged by sand and he does not have enough money to clean it up. “How can I invest hundreds of thousands to reclaim this land after I lost everything in the flood?”

Yadav used to grow rice, but now his farm lies fallow. Without a large plot, you cannot make money growing vegetables. “There are no subsidies for fertilisers, no water for irrigation. How can we afford to do this business? It’s not possible to extract groundwater at the individual level because it’s too costly. So we have left the land barren.”

Yadav’s story is repeated many times in both countries along the border. For decades experts have said better cooperation between the countries is the only way to find a holistic solution, but there is no substantial progress on the ground, largely due to the mistrust between the two governments.

Most victims of the 2008 Koshi floods call it a manmade disaster. They blame dubious engineering and failure to maintain embankments on time. “Floods are common in such big rivers. So the only way to reduce impacts is better cooperation between the two countries, as it’s a joint problem,” says Shyam Kumar Shah, Chief Warden of the Koshi Tappu Wildlife Reserve located on the floodplains of the Koshi close to the Nepal-India border. “We should be more open towards problems faced by people on both sides rather than complicating issues further.”

Activists who have been trying to get the two governments to work together on river management are still optimistic. “Transboundary cooperation in this kind of politically and geologically complex region is not an easy task; things have started to change as all have realised that it brings mutual benefits. But there is a long way to go and much to do,” says Santosh Nepal, hydrologist at the International Centre for Integrated Mountain Development (ICIMOD).

In India, before the Ganga reaches eastern Uttar Pradesh and Bihar, a lot of its water is impounded for hydropower and irrigation. So the tributaries flowing down from Nepal — of which the Koshi is the largest — are crucial to the health of the Ganga as it enters the Bengal delta in India and Bangladesh. Experts point out that this is another reason why the countries that share the Koshi sub-basin and the Ganga basin — both transboundary — should cooperate more closely.

The Indian government now has a Ganga revival project of which the first principle is uninterrupted flow of water. That makes it even more crucial for the two countries to work together for sustainable development of the region.

Explore the rest of the Koshi series here.

This series was supported by Skoll Global Threats Fund through the Earth Journalism Network.