Two recent glacier collapses in the Tibet Autonomous Region — one of them deadly — have left researchers’ hopes for glacier longevity shattered.

Despite global warming melting down some of the world’s largest glaciers, hundreds of others in the northwestern part of the Tibetan Plateau had long been considered rare exceptions. Based on scientific observation over the past few decades, these glaciers appeared to be rather stable.

In a research paper soon to be published in the Journal of Glaciology, a team of Chinese and European glaciologists fear the two recent Tibetan glacier collapses may be only the beginning. As temperatures and precipitation levels rise, the local herders, accustomed to living out in the open, are finding themselves at greater risk of natural disasters.

On the morning of July 17, a sudden gust of wind blew away several of the herders’ tents near a lake in the Aru Basin. An avalanche followed as the glacier collapsed. Ice and debris came crashing down a narrow gully and into the lake, traveling a distance of 6 kilometers. According to state news agency Xinhua, the avalanche killed nine herders and hundreds of yaks and sheep. 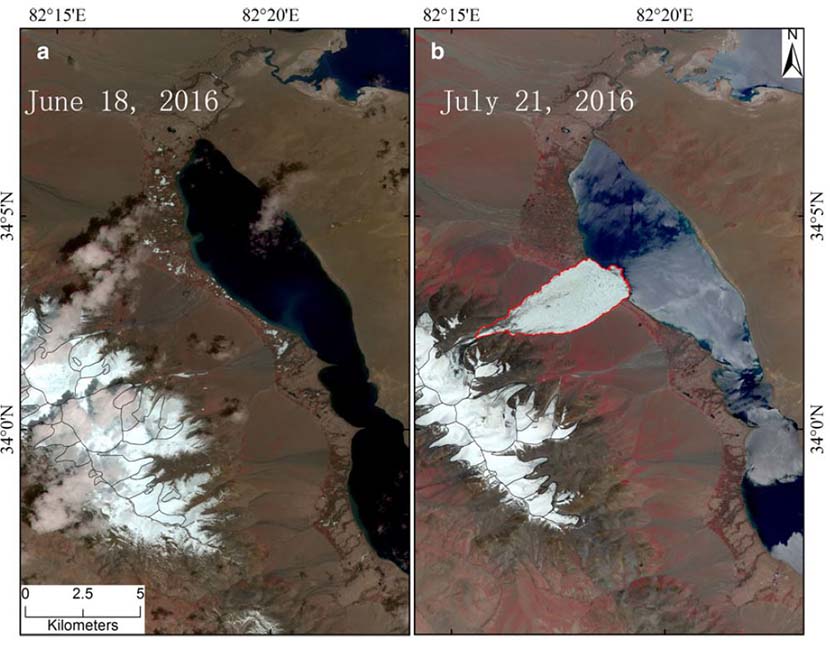 Images before and after the Aru Glacier collapse on July 17, 2016. From the Journal of Glaciology

In the aftermath of the tragedy, Tian Lide, a glaciologist at the Beijing-based Institute of Tibetan Plateau Research of the Chinese Academy of Sciences (CAS) and a co-author of the research paper, conducted a field investigation with his colleagues. According to their findings, the debris covered nearly 10 square kilometers, or an area the size of 1,400 soccer fields.

At the time it was the largest avalanche in recorded history, but that record didn’t last long. On Sept. 21, another glacier collapsed in the same area, further diminishing the glacial base.

“The site of collapse is baffling,” Tian told Nature in August. “The Rutog avalanche initiated at quite a flat spot. It doesn’t make sense.” Ruling out an earthquake as a potential cause, Tian said he suspected climate change was to blame.

According to records in the town of Shiquanhe, where the nearest meteorological station to the two collapses can be found, the average temperature in the area has risen by 1.5 degrees Celsius in the past 50 years. The average temperature in Tibet, meanwhile, has climbed by 0.4 degrees since 1960. Data from another nearby weather station shows that precipitation in the first seven months of 2016 had been 88 percent higher than the average of the preceding five years.

Some researchers, however, have argued that the collapses were due to periodic glacial movement rather than climate change or some unknown force. Guo Wanqin, a researcher at the Center for Excellence in Tibetan Plateau Earth Sciences at the CAS, told Sixth Tone that this kind of movement — often referred to as a “glacier surge” — is normal in many parts of the world, from Alaska to Tibet.

“The surges could have been caused by meltwater around the base of the glaciers,” Guo said. According to his institute, global warming could trigger more glacier surges by contributing to meltwater. In Tibet, around 1 percent of the region’s nearly 50,000 glaciers are currently surging. But Tian argues that these surges usually occur over the span of months instead of minutes.

The first collapse spurred the team of Chinese and European researchers to work together to determine the cause. After a thorough analysis of satellite data, they correctly predicted the second avalanche.

Silvan Leinss, a researcher at the Institute for Environmental Engineering at Eidgenossische Technische Hochschule (ETH) Zurich in Switzerland and one of the members of the international team, told Sixth Tone that he and other researchers discovered that the first collapse could be traced back to snow melting in September 2015. The upper part of the glacier moved downstream at a rapid rate, and researchers interpreted this as an early warning sign before the disaster. The second glacier had a similar movement before its eventual collapse.

The team’s findings were passed on to the Tibetan government, who gave orders to evacuate the herders and close roads in the area in order to minimize casualties.

But the researchers worry that their experiences may be hard to duplicate to foresee similar disasters. Monitoring the glaciers on a macro scale requires constant analysis since the data don’t reveal much when taken individually. Frequent fog and other inclement weather also makes analysis very difficult, and sometimes even impossible, according to Leinss and Tian.