The Rogbaneh Road cold room in Makeni – a once buzzing market in the heart of Sierra Leone – stands empty. Very little fish is available on the stalls. For the fish mongers who rely on the trade, there’s little to do but stand idly by and wait and reminisce. It’s clear that their customers have gone elsewhere.

“I have been doing this business for over 30 years. But my business is collapsing. Foreigners and foreign vessels have taken over our business. They sell both retail and wholesale. They own the fishing boats and also sell retail. This is killing us,” Kadie stresses, hopelessly.

“Koreans, Chinese are always doing illegal fishing. I pay US$ 1,000 a year as rent for this place. But soon I will no longer be able to raise that amount because my business has taken a nosedive,” she adds. 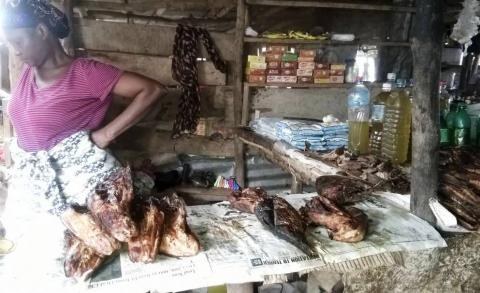 An unhappy fish seller in Makeni

Adama Kamara, another fishmonger who recently abandoned her cold room, says she must now enter into joint business arrangements because her capital has gone down due to the foreign infiltration of the business.

“Some cold rooms including mine at Mabanta Road have had to close for over six months now. The popular fish these days is just the ordinary herring. The good fishes like tuna, mackerel, barracuda and shrimps are taken to Guinea, Liberia and Senegal to be sold in US dollars. We don’t have US dollars, how can we cope?” she asks rhetorically.

In the Sierra Leonean capital of Freetown, the story is worse. Some fishermen have abandoned their boats to rot at the wharf.

Various sizes of fishing boats are lined up along the coastline. Some have been there for weeks with no movement because the fishermen say their catch is not encouraging these days.

Fishing authorities ordered the vessels to return to the Freetown port for further investigations. A fourth vessel, owned by an Italian company, was found with four kilogrammes of shark fins on board, a clear violation of European Union (EU) fishing rules. In addition, more than 70 bags of shark carcasses were found on one of the Chinese vessels.

Bakary Coulibaly, a Communications Officer with Greenpeace in West Africa, says the penalty is not sufficient enough to deter illegal activity in the future.

“The Government fined each of the boats an amount of money and they paid. That’s the problem. They always have money to pay when they are caught,” he said. “Our recommendation is for tougher penalties like prosecution... But that can only be done by the Government.”

He added that some of the boats were part of the Regional Fisheries Management Organisation, but they violated the laws on fishing outside of their mandate.

“Three of them are part of the Illegal unregulated fishing blacklist of Greenpeace, which makes the issue more of a concern to us,” he said. “We are working on a full report to be issued soon,” he added.

Sierra Leone’s fishing regulations have long been weak, or even non-existent, and foreign vessels have been active in the country’s exclusive economic zone (EEZ) for decades. But marine and food organisations like the Food and Agriculture Organisation of the United Nations (FAO) are now helping the country to protect its marine wealth.

In November 2009, Sierra Leone signed the Agreement on Port State Measures to Prevent, Deter and Eliminate Illegal, Unreported and Unregulated Fishing—commonly called the Port State Measures Agreement, or the PSMA—and in June of this year began to take steps to ratify it. The Agreement, which entered into force in June 2016, requires parties to enforce better management of foreign vessels at port in order to reduce instances of illegal, unreported and unregulated (IUU) fishing.”

Local fishermen, however, are losing hope. 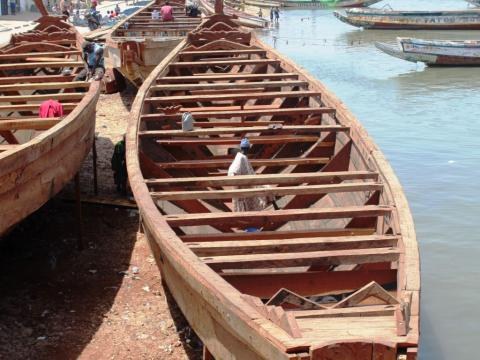 Fishing boats along the Lungi coast

Morlai Turay is a fisherman at Rokuper Wharf in the east of Freetown. Foreign boats, he says, are destroying the fish habitats and are putting them out of business.

“They use illegal nets and destroy the little fishes, which affects the fish population,” he said.

Musa Sesay works for Community Action to Restore Life (CARL), a local organisation working to protect rights of fishermen. He accepts that illegal fishing is forcing the fishmongers out of business.

“There should be laws to protect the locals in the fishing business,” he stressed. “The market cannot be allowed to operate this way because the foreign vessels are using lots of money to make their way into the business. This is a disservice to the fishmongers.”

However, Government authorities seem to just accept that the fishing business these days is unequal.

Greenpeace notes that the Chinese are the biggest players with more than 300 fishing vessels in the region. Most of them are trawlers - including bottom trawlers, one of the most destructive, industrial fishing methods.

There is also an increase of fish caught for fishmeal purposes only to feed pigs and other animals on the other side of the world. Europe is the second biggest, foreign player in West African waters with over 100 fishing vessels from the European Union as well as some vessels from Russia.

Like the Chinese, many of these fleets are bottom trawlers, but large super trawlers catching huge amounts of small, pelagic fish like sardine, sardinella, and horse mackerel are also well represented.

It is estimated that fish products worth 874 million euros were imported in 2016 from West African countries (including Mali, Mauritania, Niger, Nigeria, Senegal, Sierra Leone and Togo) to EU countries. This is threatening biodiversity and food security for the West African population.

The EU has a great responsibility as the second biggest player in West African waters and must take the most progressive position in their foreign fishing policy, Greenpeace says.

In the midst of the problem, government officials also agree that foreign boats are robbing the countries’ marine resources.

“Foreign boats are stealing the country’s fishes. We have set the records straight,” says Salieu Sankoh, National Project Coordinator of West Africa’s Regional Fishing Programme Sierra Leone (WARFP-SL). He goes on: “Any vessel that wants to fish in our waters must do so through the right channel and comply with the laws of Sierra Leone. This is what we are working on but there are challenges.”

But for fish chairlady Kadie, the glimmer of hope for action is growing dim because the foreign vessels have US dollars to pay their way in and out easily.

“Can we fight rich boat owners who are using dollars to pay their way through? It’s very impossible,” she says, sadly. “We have complained over and over without actions – so we have given up.”