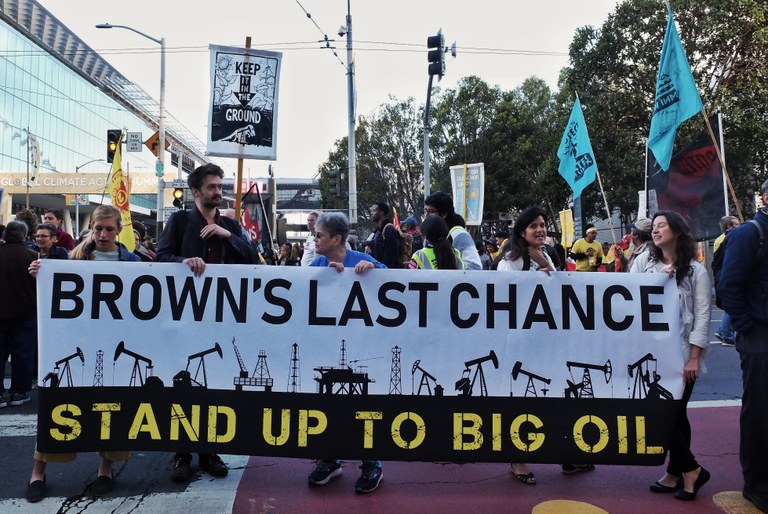 SAN FRANCISCO — As Typhoon Mangkhut and Hurricane Florence bore down on the Philippines and the United States, respectively, hundreds of climate activists demanded that government leaders and businesses attending a global climate summit here in California commit to ending fossil fuel extraction.

Brown is viewed by many as a champion of shifting his state to clean energy use, but critics point out that California’s continued oil and gas drilling is a stain on the state’s commitments toward climate action.

“What we really need leaders to do is to commit to no new extractions of fossil fuels,” Leila Salazar-Lopez, executive director of US-based Amazon Watch, said during a protest outside the venue hosting the GCAS in downtown San Francisco. “One hundred percent renewable [energy] is great and we applaud that. But that’s not enough.”

In 2017 President Donald Trump declared that he would pull the US out of the landmark Paris Agreement, a voluntary pact under which nations committed to radically cut their greenhouse gas emissions in an effort to slow rising global temperatures.

Amid swirling uncertainty about the US commitment to global climate action under the Trump administration, cities, states and businesses have banded together to push for support for the Paris Agreement under the banner “America’s Pledge.”

“We want the world to know that Americans are more determined than ever to make progress on climate,” former New York City mayor and philanthropist Mike Bloomberg said during the opening ceremonies of the GCAS.

A report released at the summit tracking the progress made by those grouped under the America’s Pledge initiative found that the US has achieved a reduction in greenhouse gas emissions but will need to do more to achieve its targets. (The US can’t legally withdraw from the Paris Agreement until 2020).

A few days prior to the start of GCAS, Gov. Brown signed an historic bill that would ensure carbon-free electricity for the whole state of California by 2045.

The law has been hailed as landmark legislation signifying the state’s objection to the Trump administration’s regressive policies on climate action.

But critics say that since Brown was elected for his second run as governor eight year ago, he has approved 20,000 oil and gas drilling permits.

“I believe Jerry Brown that he will achieve 100 percent renewables, but that’s not going to stop climate change,” said Salazar-Lopez. “Keeping fossil fuels in the ground will.”