“We had information that a suspected smuggler was in the area, so we were checking all vehicles going to Myanmar,” said the customs department officer once posted in Moreh, a town on the India-Myanmar border. “We were looking for drugs. Imagine our surprise when we found these bags of shiny scales taped to the underside of a van. We didn’t even know what they were.”

Turns out they were pangolin scales, a key commodity in the illegal trade in wildlife in which Pangolins, or scaly anteaters, are the most trafficked mammal on the planet, according to the International Union for Conservation of Nature (IUCN). 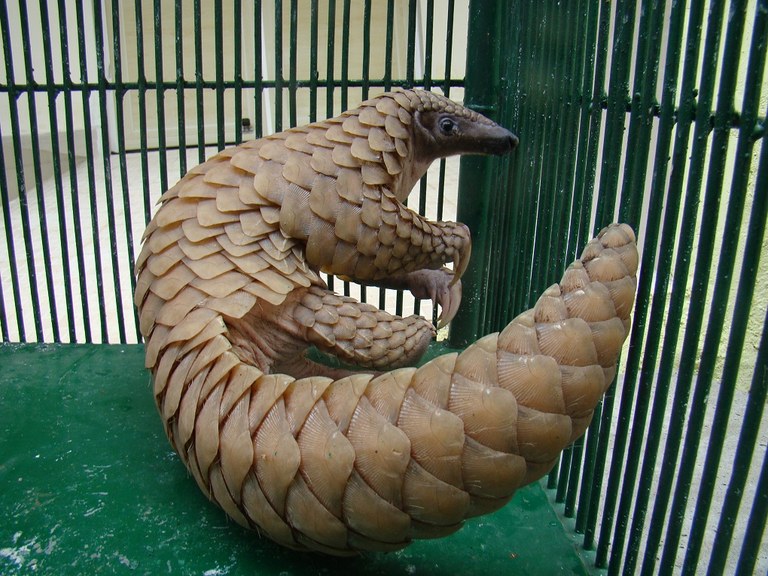 The pangolin is considered the most heavily poached and trafficked mammal on the planet, according to the International Union for Conservation of Nature / Credit: Sandeep Kumar

The scales are used in traditional Chinese medicine, though they have no proven therapeutic value. They are made of keratin, the same as human nails. But the demand shows no sign of slowing.

Pangolins meat is also prized. Throughout China and Vietnam, and among some indigenous peoples in India, Nepal, Bangladesh, Myanmar, Thailand, Laos and Cambodia, pangolin meat is considered a delicacy, and there is a belief that the meat has medicinal properties.

M. Monirul H. Khan, professor of zoology at Dhaka’s Jahangirnagar University, says superstitions about pangolins lead to them being used for traditional medicines, but there is no scientific evidence that these medicines are useful to humans.

Due to these beliefs, indigenous people in the Indian states of Chhattisgarh, Andhra Pradesh and Tamil Nadu have traditionally hunted the pangolin but only on special days, so the number hunted was small.

No longer. Using the weight of pangolin scales seized while they were being smuggled to China – either directly, or via Myanmar or Nepal – a study by TRAFFIC, a non-profit focused on the illegal trade in species, estimated that 5,772 pangolins were killed illegally in India between 2009 and 2017.

This estimate is likely to be a gross underestimate, however. Global policing agency Interpol goes by the rule of thumb that only 5 percent of contraband smuggled across international borders is detected.

TRAFFIC is a joint program of the World Wildlife Fund (WWF) and IUCN and acts as a wildlife trade monitoring network.

It reached its estimate of the number of pangolins definitely killed by assuming that each scale weighs 10 grams and that an average pangolin weighs one kilogram. Over the eight-year period between 2009-2017, TRAFFIC researchers looked at 90 recorded pangolin seizures. Of them, 83 were of pangolin scales, while the rest were of pangolin meat, live pangolins, a dead pangolin and a specimen for taxidermy.

There is no estimate of the pangolin population in India. Of the eight species found worldwide (four in Asia and four in Africa), two are found in India: the Indian Pangolin (Manis crassicaudata) and the Chinese Pangolin (Manis pentadactyla). The Indian Pangolin is found throughout the country south of the Himalayas, excluding the north-eastern region, while the Chinese Pangolin ranges through Assam and the eastern Himalayas. 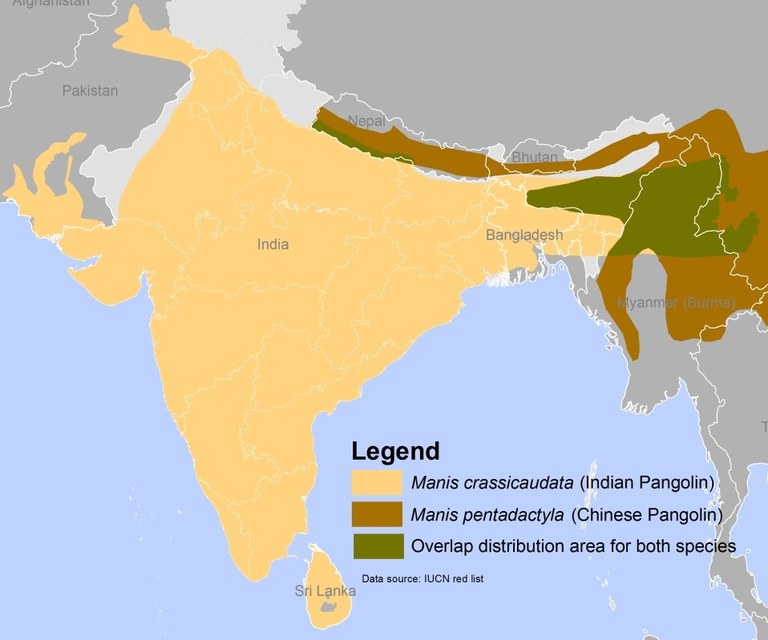 Pangolins are the only mammals with large keratin scales covering their skin. They are toothless, nocturnal, live in burrows and feed mainly on ants and termites. Female pangolins keep their young in burrows until they are old enough to ride on their mother’s tail. When threatened, they curl up into a tight ball. Pangolins consume up to 20,000 ants per day. That’s about 70 million ants per year. They are slow breeders, producing between one and three offspring every two years.

Both the Indian Pangolin and Chinese Pangolin are listed in Schedule I of India’s Wildlife Protection Act of 1972. This means that hunting, trade or any other use of the species or its body parts and derivatives is banned. International trade in pangolin and their body parts and derivatives is prohibited since all pangolin species are now listed in the Convention on International Trade in Endangered Species of Wild Fauna and Flora (CITES) Appendix I.

Despite these laws, pangolins are netted, trapped or snared, mainly for the Chinese market and some for Southeast Asia.

“Without accurate population estimates, the impact of such trade on India’s pangolin population is unclear,” Badola says.

“The trend of global trade data indicates that the trade of Asian Pangolins is decreasing internationally while that of Africa pangolins is on rise. This may be an indicator of declining Asian Pangolin population throughout their ranges, and hence needs to be investigated further,” he continued.

“Considering the high level of demand in our close proximity like in China and Southeast Asia, precautionary measures must be put in place to safeguard India’s remaining wild populations. More effective law enforcement remains paramount.” 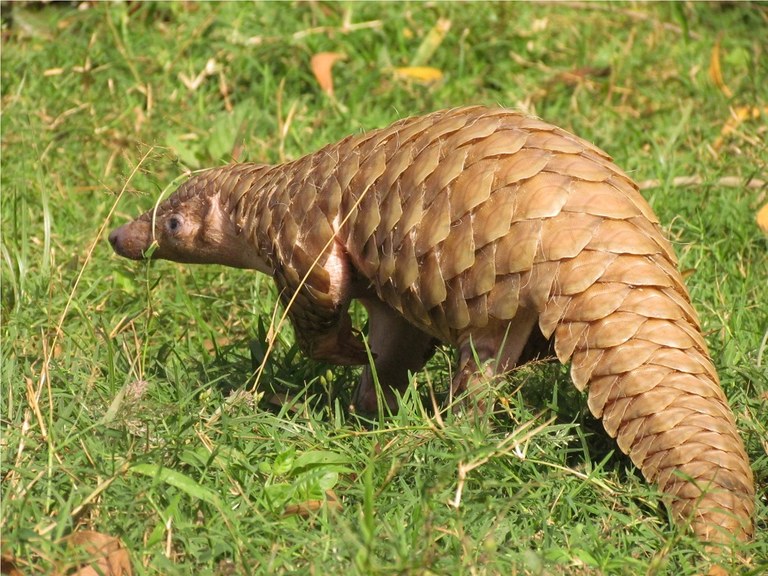 The Indian pangolin may soon disappear from the wild if it is not protected / Credit: Rajesh Kumar Mohapatra

To achieve that, Badola says what’s needed is enhanced cooperation among source countries in South Asia and Myanmar along with law enforcement agencies in countries where demand is highest, such as China and Vietnam.

A more ambitious project would be to carry out a population census of pangolins in India as well as raise awareness among local communities of the ecological role played by pangolins.

The challenge elsewhere in South Asia

While India is definitely one of the major sources of pangolin trafficking, it is by no means alone.

In March of 2018, two Chinese nationals were arrested in Nepal after they were caught with 162 kilograms of pangolin scales reportedly brought from Africa. According to a local media report, it was the country’s largest single haul of pangolin scales.

Like India, Nepal also has two species of pangolins – the Chinese and the Indian. There is also no precise estimate of its population in the country as no nationwide survey has been carried out. Nepal does have a pangolin conservation action plan, begun in 2018 and slated to run until 2022, that says it will take stronger steps to crack down on poaching and trafficking.

But the plan has very little detail and poaching and trafficking pose a growing challenge to pangolin conservation in the country, which acts as both a source country and a transitional hub for pangolin parts and their derivatives.

And the more they exchange hands the more lucrative the trade becomes. 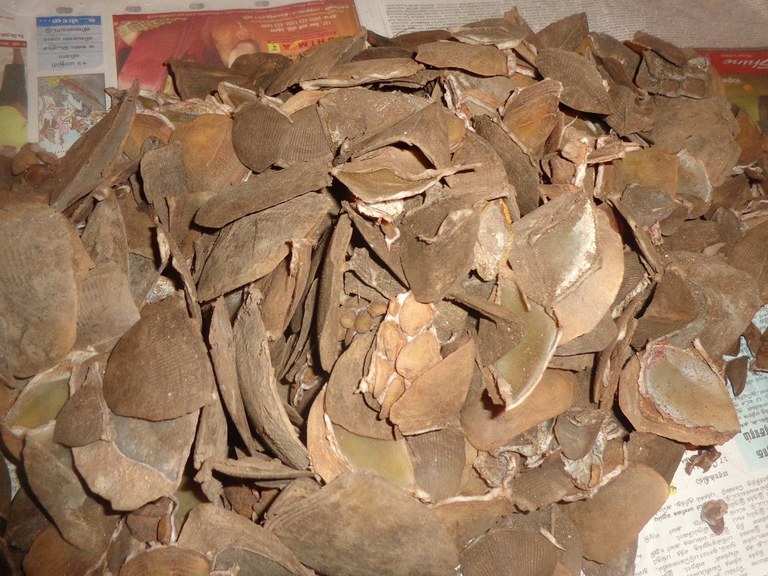 A batch of pangolin scales / Courtesy of the Wildlife Crime Control Bureau at the Ministry of Environment, Forests and Climate Change

According to Paudel, 325 kgs of pangolin scales were seized in 2013 on the Araniko highway that links Kathmandu and Tibet. Paudel estimates that it takes about four pangolins to compile one kilogram of scales, which means about 1,300 pangolins must have been killed in 2013 alone.

Despite the threats imposed on the pangolin by the illegal wildlife trade, there has been relatively little effort to study patterns or trends in the trade through Nepal, which could help conservationists better understand how to crack down on trafficking.

In Bangladesh, pangolins are found in deep forests in Sylhet, the Sundarbans and Chittagong Hill Tracts. Three species of pangolins once lived in Bangladesh, but according to IUCN wildlife expert Shimanton Dipu, they have been poached and trafficked to such an extent that only one species remains: the Chinese pangolin.

“It is one of the most trafficked animals in Bangladesh,” Dipu said. And while the species has been declared a protected under Bangladesh’s Wildlife Act of 1974, Dipu said there is no record of any seizure by the authorities.

“Countries that most need to enhance their law enforcement efforts are those with low numbers of seizures, but that at the same time [are] implicated in the routes of many trafficking incidents,” TRAFFIC researchers Sarah Heinrich, Talia Wittman, Joshua Ross, Chris Shepherd, Daniel Challender and Phillip Cassey wrote in a December 2017 report that looks at the global trafficking of pangolins between 2010 and 2015.

In their report, the researchers recommended that  law enforcement agencies in all countries involved in pangolin trafficking, “employ intelligence-led investigations to examine, identify, and prosecute all parties involved in the pangolin trade that violates national laws, from collectors and traders to logistics companies and importers, as well as the vendors, purchasers and users of pangolin parts and products.”

These efforts, it continued, “would be particularly useful in countries and territories that have been involved in large-quantity shipments … namely: Cameroon, China, Guinea, Hong Kong SAR, India, Indonesia, Kenya, Lao PDR, Malaysia, Myanmar, the Netherlands, Nigeria, Pakistan, the Philippines, Sierra Leone, Singapore, Thailand, Uganda, the US, and Vietnam.”

Several European countries, including Germany, France, and Belgium, have also been identified as important transit hubs, especially for African pangolins, the report states.

It refers to the transnational network of illegal pangolin trafficking as highly mobile with new trade routes emerging every year.

An analysis of the types of pangolin parts and quantities seized by authorities could help determine “the type of criminal activities and/or networks behind the shipments, and the enforcement response required,” the TRAFFIC report notes.

And much as it has been done with the trafficking of ivory, rhino horns or tiger parts, efforts to crack down on the illegal trade in pangolins will need to be equally dynamic and responsive, the report continues.

An earlier version of this story was first published on The Third Pole. This version was updated and revised on May 15 to include a new table highlighting pangolin seizures.

This is part of a special reporting series supported by EJN on threats facing the pangolin. Read our earlier stories here: 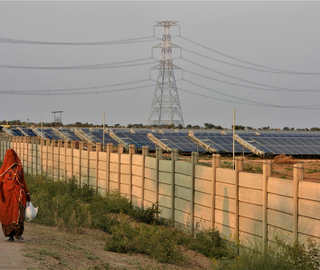 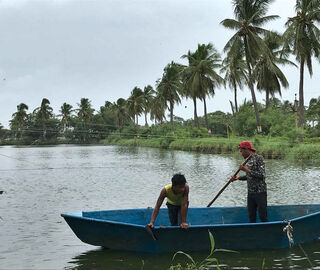 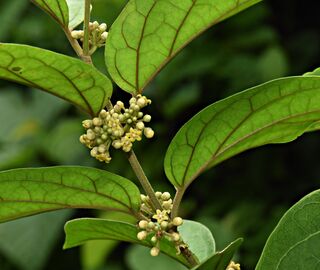