Sudanese villages are being swallowed by desert sands

Sudanese villages are being swallowed by desert sands

El Toma Abdel Maruf used to make her sons in the city laugh when she told them that they might one day find themselves buried under the sand.

But for Maruf and many other residents of El Shababit, who have had to relocate several times due to the encroaching desert in Sudan's River Nile state, battling sand is an everyday challenge.

"In the old village, the sand dunes came and covered us, so we moved here. But now the dunes have come here too," says Maruf, who laughs when asked how old she is but looks to be in her 50s. 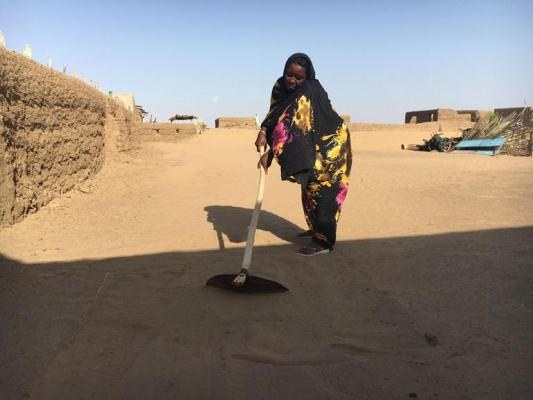 El Toma Abdel Maruf sweeps sand from outside her home in El Shababit, where the desert is creeping in due to climate change. Photo by Hannah McNeish/Women & Girls
With 58 percent of Sudan's rural population living in poverty, many have fled to major towns and cities in search of work. Those left behind are at the forefront of the fight against climate change. "There was a sand dune that even a tractor could not get to the top of," says Maruf.

Even on a day with almost no breeze, the doorstep to Maruf's home is covered by inches of terracotta-colored dust. She demonstrates the daily grind of raking through and sweeping away piles of sand using a long hoe. She says her three daughters regularly get sick and injured from having to shovel themselves out of their square brick homes, which sit miles away from dunes that move quickly when the haboobs, or sandstorms, whip through the desert.

Maruf has had to rebuild the outer wall of her home three times to try and stop the wind and sand blowing through the house. Some of her neighbors have lost everything to sandstorms.

Around 80 percent of Sudan's estimated 45 million people rely on the land for a living but are ill-equipped to deal with the desertification and degradation of land caused by deforestation, poor environmental management and global warming. Sudan's National Adaptation Program of Action found that the desert is slowly spreading south. Conflict and the breakdown of governance has set more people in Sudan on the move, eroding communities and, in turn, land, as indigenous knowledge is lost and people are less tied to their land. Sanctions and a lack of investment into agriculture have also sped up land degradation as water systems and farmlands sit neglected, rendering large swaths unusable.

But since the 1970s, climate change experts have been saying that the effects of global warming, including increasingly fierce droughts, floods, temperatures and erratic rains, have sped up the desert's march south. This has led to soil erosion that sows ruin for farmers, forcing many to migrate and exacerbating existing conflicts over natural resources while also creating tension in urban centers over limited services.

El Shababit is one of several villages involved in the project. A belt of trees, or shelterbelt, was erected to shield the village from sand, while solar-powered pumps draw water from wells and rivers to ensure the trees survive and to ease farmers' reliance on unreliable rains. 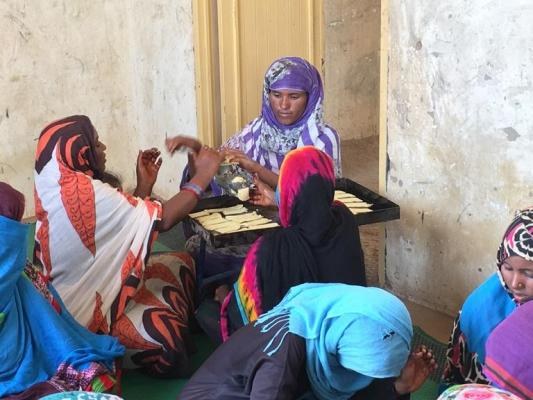 Women in desert villages in Sudan’s River Nile state are being taught how to bake and make dairy products to diversify local economies that rely on agriculture. Photo by Hannah McNeish/Women & Girls

"We used to have very hot winds coming from the east and other directions that used to affect us. But since we started cultivating the area and planting trees, the winds have decreased," says village chief Idriss Abdel Jalil.

The project also introduced butane gas to the village to stop people cutting down trees for fuel, and to help the women who would have to walk for hours to fetch firewood.

"Womenfolk are the ones really suffering when ... fetching firewood for cooking," says Selva Ramachandran, Sudan country director for the United Nations Development Program, which has been supporting NAPA projects since 2010. "Climate change is a core development issue, for Sudan particularly, but I think we should look beyond Sudan, too."

In El Shababit, women have been taught baking and cheese-making to boost and diversify the local economy, which is largely based on farming done by men.

Maruf and other women are benefiting from the new training and the money it brings in. But they still live in fear that the desert could wipe everything out. "That sand dune was far away and has now come closer," Maruf says, pointing to a steep bank of burnt orange sand looming on the horizon.

She wants more trees to be planted, which she says will also stop the floods that sweep houses away during the rainy season and often leave the village marooned.

"We couldn't even take a sick person to hospital. Sometimes we are cut off for a week or two," she says.

As satellite images of Sudan show patches of green turning to gray, the race is on to reforest. River Nile government officials say they have planted over 8,000 trees since 2015 and that farming communities are joining in and pooling funds to construct shelterbelts and tree nurseries, after seeing they will get better yields from protecting their crops.

The bulk of the funds to stop the desert marching south may come from international climate funds and nongovernmental organizations, but the real work is being done by people on the ground who will otherwise find the desert upon them.

"No one has cut down a tree here in five years," says Maruf, as she turns back to sweeping the thick carpet of sand from her doorstep.