A gaggle of laughter breaks out each morning at this one-room milk collection centre.

Over 30 women have gathered to deliver milk here: a daily rendezvous for this clique belonging to a women-run dairy co-operative, in the Sundarbans delta in South Asia, that is inching its way to becoming 100 percent organic.

In the bucolic settings of the Chowrangi village in West Bengal, these empowered women milk producers ranging from age 20 to 80, have now begun to think of themselves as important stakeholders in a potential organic-farming driven rural economy. 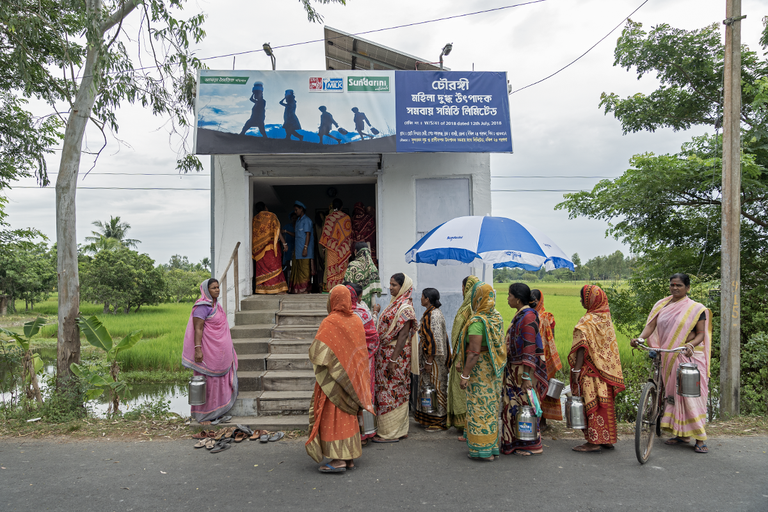 As members of the Chowrangi Women Dairy Cooperative Society (CWDCS), they collect milk from native cow breeds, pour them in steel milk cans and diligently present their product at the co-operative’s collection centre for testing.

Their vision is climate-resilient agriculture in this disaster-prone delta. Like island nations of Tuvalu, Marshall and Maldives, the Sundarbans archipelago straddling the India-Bangladesh border too faces an intensifying barrage of climate impacts.

“We have been through floods that washed our fields with salt and then came (cyclone) Aila in 2009. Paddy fields sank. Livestock was killed. For years we could not do adequate cultivation due to the salt-encrusted soil. Heavy use of chemical fertilisers and pesticides have further degraded systems. Now rainfall patterns have also changed,” said livestock owner Suparna Deb Sharma and chairperson of the CWDCS.

“We don’t want to depend on nature so our reliance is on organic farming,” she told this visiting Mongabay-India correspondent.

The dominating colour in this countryside is green and blue. Close to three hours away from the state capital Kolkata, the monotone of this verdant landscape is only broken by the rustle of these women’s colourful sarees, the meandering red-brown brick-paved paths and the occasional concrete structures. Urbanisation is spreading fast, Suparna Deb Sharma said.

In this climate change hotspot, women have learnt to live on the edge with rising sea levels and salt water intrusion. Globalisation is also making its presence felt.

“We use mobile phones now for our day to day affairs and soon we want to own smartphones. We do know about the demand for organic foods and we want to learn more,” she said.

Beaming with pride, Suparna Deb Sharma spoke of “taking matters into our own hands and transforming our systems into organic as it was done traditionally as part of inherited agricultural systems.” 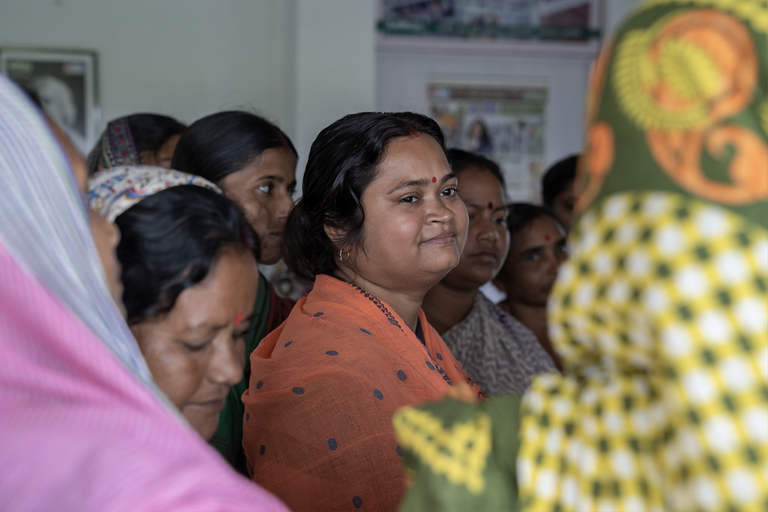 Of the 102 islands of the Indian Sundarbans archipelago, Chowrangi lies in Basanti block, one of the better off islands out of the 54 inhabited ones. Women form about 49 percent of the population.

Connected by a highway to Kolkata, Basanti is also the gateway for tourists to the Sundarbans- the world’s largest mangrove forests, the lair of the Royal Bengal Tiger.  Sonakhali, opposite Basanti, is a popular starting point for Sundarbans steamer and launch trips.

According to Agricultural and Processed Food Products Export Development Authority (APEDA), the total area under organic certification process (registered under the National Programme for Organic Production) is 3.56 million hectare (2017-18).

CWDCS is affiliated to the Sunderban Cooperative Milk & Livestock Producers’ Union and sells its products under the ‘Sundarini Naturals’ brand, an initiative of the West Bengal government. CWDCS is one of 70 such all-women run co-operative operating in the region.

The brand was feted earlier this year by the National Dairy Development Board (NDDB) for its high-quality dairy products. Apart from cow milk and ghee (clarified butter), eggs, honey from the Sundarbans and rice are sold under the aegis of the brand.

Covering 3500 women farmers, these DCSs record a peak milk procurement of over 4000 kilograms per day from seven blocks of the Sundarbans and function with NDDB’s guidance and technical support.

“Our milk is of high quality. They are from indigenous cows and we do not use antibiotics or hormones. Once we bring the milk to the centre, it is tested for fat content and other parameters. Based on those we get the price,” Deb Sharma said.

“We test a drop of milk from each of the cans. If the fat content is not satisfactory then it is not used by us. Only the best quality milk goes out,” Mandal said with a justified gleam in her eyes. 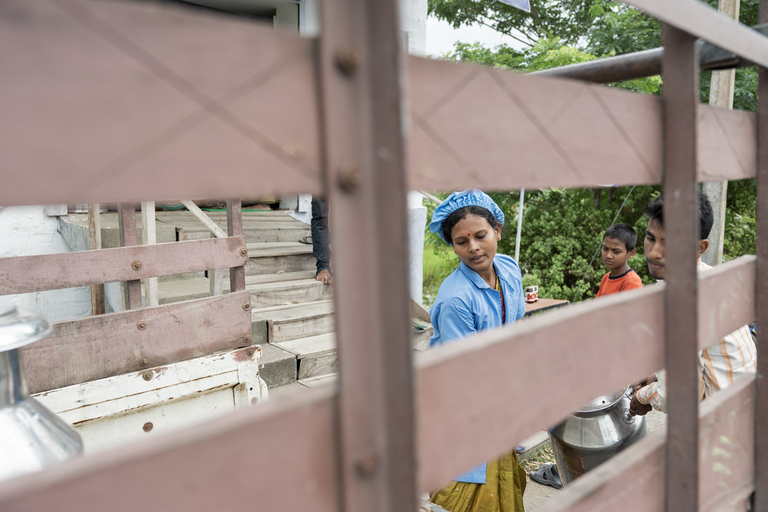 Each days’ quantity and quality parameters of the produce is registered digitally and the women members are paid every 10 ten days.

Between them, they manage to pour in about 50 litres of milk each day, chimes in Madhavi. Presently the co-operative has 95 members and depending on the availability of lactating cows and their numbers, 30 to 40 women at a time are active at the co-operative.

The cows are fed organically-grown corn, sorghum and a local variety of grass. The challenge to go 100 percent organic has spurred them to look for a suite of options within nature’s toolbox itself.

“For organic milk, the whole cycle of milk production has to be free of chemical fertilisers and pesticides. So we use herbal concoctions as insect repellents. These are also used for veterinary purposes. The herbs come from herbal gardens we grow in our homesteads. Cow dung manure, liquid manure and even vermicompost are used by many,” Suparna Deb Sharma said. 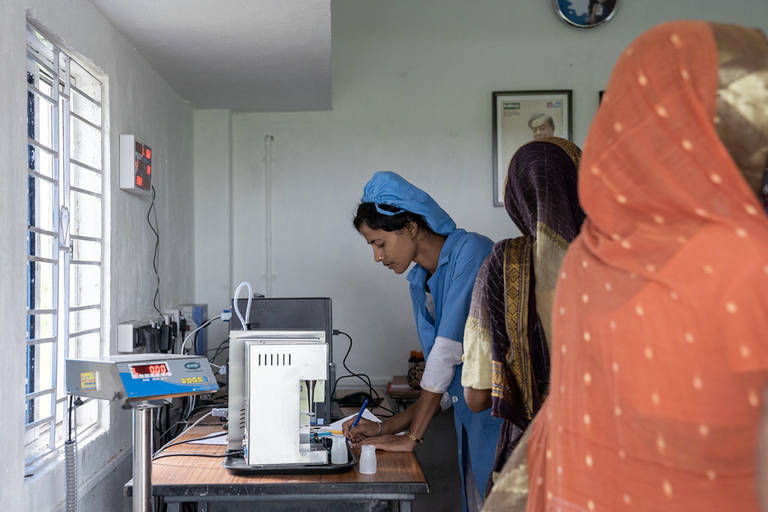 An employee at the centre following procedures to ensure good quality of milk produce is passed on for distribution / Credit: Kartik Chandramouli/Mongabay

“Earlier, we had seen that the members suffered financially due to lack of green fodders. However, the scenario has changed and now milk union is supplying green fodder seeds in adequate amount to them,” Ghosh told Mongabay-India.

Ghosh lauded the members from upping the ante in digitising processes such as computerising the whole supply chain, from milk procurement to milk packaging.

“During my interaction with the women milk producers, I felt they are increasingly becoming more technology oriented towards clean milk production. As far as I know. recently they are producing organic milk, free from any drug/pesticide residue,” Ghosh said.

The co-operative has also taken care of wastage.

“Native cows do not produce milk in as much quantity as other breeds. Despite this there was wastage. Earlier we had to throw out milk that remained with us after consumption. I made all my children drink milk but we still had much to spare and I threw out the excess in the river or on the fields otherwise it would spoil,” Sabitri Mondal said.

“Now we contribute the excess milk to the co-operative and earn decent money,” Sabitri Mandal chipped in with a toothy grin. Her earnings total Rs 5000 per month, the same as Suparna’s.

Sabitri is investing in her children’s education and banking the rest of the money as her personal savings.

Falling in line after their initial meet-and-greet, Sabitri and her new friends quietly trudge up the wooden staircase to the computer-based set up where Madhavi and her colleague start the quality control tests. Acknowledgement slips are printed and passed on to each of the member.

Waiting for her turn at the counter, Rita, a stay-at-home mother, elaborates on the other benefits this co-operative has brought into their lives.

“This has become our ‘morning walk’. Earlier we never bothered to venture out much. Now we walk for a kilometre with our milk cans to the collection centre. I have forged strong friendships and we meet everyday at this centre not just to deliver milk but also to share our problems,” Rita said.

The online money-transfer system also works in the women’s favour.  “We don’t have to sell the milk to middlemen. Every 10 days we get our payment via online bank transfer and we withdraw cash via ATM. We are in control of our own earnings,” Rita stressed. 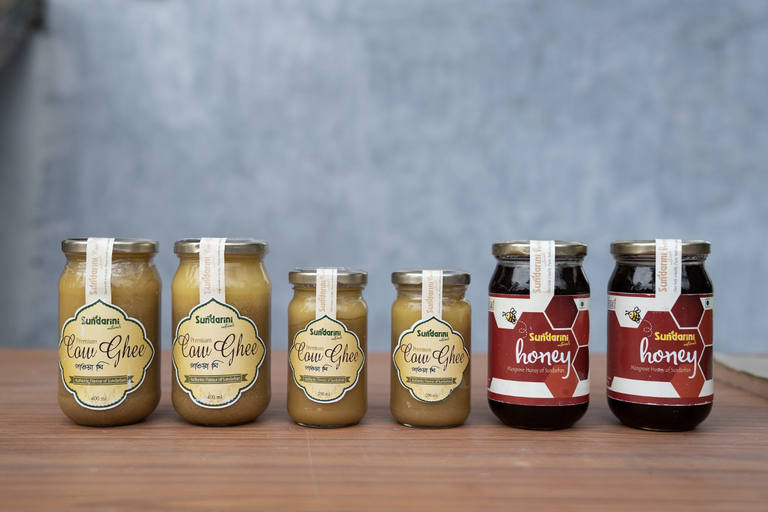 Organic ghee and honey, the other products made by the co-operative, on display outside the centre. Tourists heading to Sundarban mangroves halt here and purchase the various organic products sold by the co-operative / Credit: Kartik Chandramouli/Mongabay

In 2018 Sikkim won the Future Policy Award 2018, also known as the “Oscar for best policies”, conferred by the Food and Agriculture Organisation for the world’s best policies promoting agroecological and sustainable food systems.

In 2003, Sikkim stopped imports of chemical fertilisers in the State and since then the cultivable land there is practically organic and farmers of Sikkim are traditional users of organic manure.

“Sikkim is the first organic state in the world. All of its farmland is certified organic. At the same time, Sikkim’s approach reaches beyond organic production and has proven truly transformational for the state and its citizens,” the statement said.

The Sikkim tourism sector has benefited greatly from the state’s transition to 100 percent organic as the number of tourists increased by over 50 per cent between 2014 and 2017.

Suparna, Rita and Sabitri are also hopeful that their small steps in organic dairy farming will also enhance sales through tourism.

“When tourists pass our small milk collection centre they often stop and ask us. We showcase our produce and they are happy to purchase them directly from us. We believe that we can scale up to increase our product base and customers,” signed-off Suparna.

Sahana Ghosh was in the Indian Sundarbans to do a series of stories as part of the Internews’ Earth Journalism Network Bay of Bengal Story Grants.