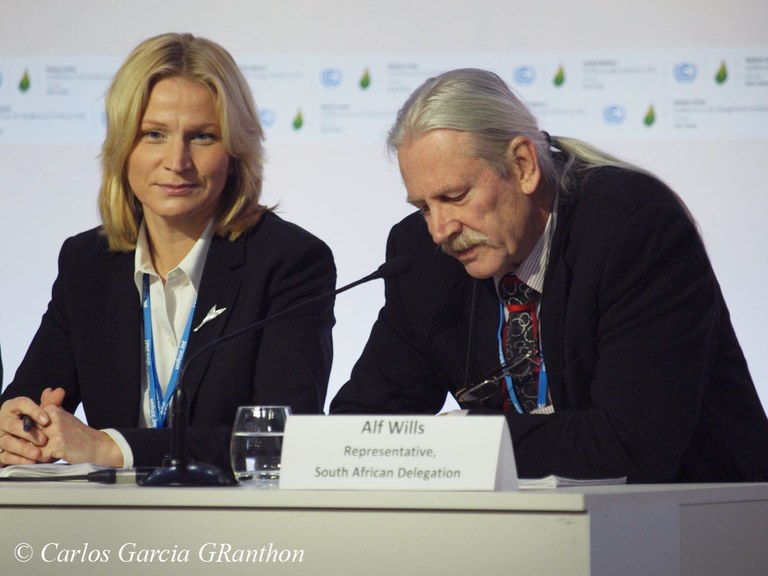 Influence was the name of the game at the critical climate talks in Paris this week. And for South Africa it meant arriving with a strong, experienced contingent, that could shape the kind of deal that South Africa wanted, the South African delegation said.
South Africa sent 137 officials to the talks, and the delegation was adamant that every person had a role to play.
Social media this week questioned whether South Africa was not wasting taxpayers' money by sending so many delegates to the talks.
Just under 40 000 delegates attended the COP21 climate talks over the past two weeks. An agreement was due to be signed on Saturday night after delegations spent two weeks hammering out the historic deal.
Biznews started the conversation, saying while it was important for South Africa to participate in the climate negotiations, 10 delegates might have been a more appropriate number. Several ministers, department officials, Eskom executives, mayors and academics made the trip as part of the delegation.
Also included in Team South Africa was a number of veterans with vast experience negotiating the perilous halls of such a conference.
President Jacob Zuma also attended the summit at the opening with a host of presidency officials. It is unclear what the total costs were of flying the delegation out.
The South African delegation hit back at the critics, saying in a statement that the team did South Africa proud and was not deterred by "uninformed critics".
Environment Minister Edna Molewa said South Africa’s “active and vigorous participation” in the talks was “not negotiable".
The department's spokesperson, Albi Modise, said it was not helpful to have critics distort facts when the teams spend sleepless nights serving South Africa, ensuring that the country's national interest is fully secured and the planet saved.
“They underestimate the magnitude of work being done here, and only try to focus on counting heads out of context and facts and, therefore, try to mislead our nation,” he said
He added that a Paris deal came about as a result of long hours, working around the clock, on complex multiple parallel work streams, formal and informal meetings, negotiations and consultation sessions and side events.
“South Africa is regarded as a constructive negotiator because it plays a major role in ensuring that parties reach consensus in the negotiations,” Modise said.
The size of the delegation was more or less par for the course, considering that the country chaired the most important negotiating block at the negotiations, the G77 plus China.
It was also not among the top 20 largest delegations at the talks.
Nine out of the 20 largest delegations were from Africa. Guinea with 398 was the largest delegation, followed by Côte d’Ivoire with 338 delegates. Trinidad and Tobago, as well as Syria, had the smallest delegation with three delegates making it to Paris.
The United States, a critical player at the talks, had 124 delegates, making it the 35th biggest delegation. Its nemesis China boasted 326 delegates. Morocco, who is hosting the talks next year, had the most negotiators - 439. South African ally Brazil, had 319 official delegates attending.
Host country France registered 395 delegates.
South African civil society delegate at the talks Rehana Dada said South Africans had to appreciate the complexity the South African delegation was dealing with at the talks. While the South African civil society often differed with the South African delegation, they also believe that the number of the delegates was justified.
Dada said it was crucial for South Africa to be a force at the talks.
"I'm just glad we have the resources to have a large delegation. Because of this South Africa is able to stand on its own at the talks. We can influence a treaty that will have a great impact on the world going forward.
South Africa's leadership in the G77 plus China required a lot of support from delegation members, she believed
"It takes a great deal of effort to hold the unity of this group together," she said. "You need a large delegation to do that."
She added that apart from the big policy decisions being made relating to the deal, COP was also a meeting ground, where a lot of side deals were struck and critical connections made.
The South African delegates are staying at the Hyatt, near the Champs-Élysées and reportedly most of South Africa’s officials also flew business class. But Modise said the government officials at the talks stuck strictly to the cost containment requirements spelt out by the government and took measures to ensure reasonable government expenditure.
Ironically many of South Africa’s negotiators did not even see the inside of their hotel room this week, as they negotiated right around the clock. The first proper rest happened on the flight home.
One of South Africa’s most senior delegates said on Friday he would be buying his kids’ gifts back at OR Tambo International.
“Christmas shopping? What Christmas shopping?” he said before falling asleep in his chair.