Vanuatu will be seeking more support from the technology mechanism at the 27th Conference of the Parties (COP27) under the United Nations Framework Convention on Climate Change (UNFCCC).

Technology can help Vanuatu not only meet its carbon reduction targets under the Nationally Determined Contributions (NDCs), but also reduce the energy cost of living and improve quality of life, according to Director of Energy (DoE), Anthony Garae, who is representing Vanuatu in technology discussions at COP27 climate summit in Sharm el-Sheikh, Egypt.

Energy prices have been increasing and people have been asking whether they will ever come down, Director Garae said in a statement, adding that renewable energy sources can dramatically reduce energy bills and pollution.

Garae added that while technology has not been considered as much of a priority as loss and damage for Vanuatu until recently, renewable energy targets cannot be met without technology.

He said they will be seeking more support from the technology mechanism at the 27th Conference of the Parties (COP27) under the United Nations Framework Convention on Climate Change (UNFCCC).

Recently, the government announced its intention to introduce electric vehicles, as part of reducing emissions and improving energy efficiency. Support for this initiative was received through the Global Green Growth Institute (GGGI) and the United Nations Environment Programme (UNEP) to pilot the project with government vehicle fleet.

Vanuatu plans to generate all its electricity from renewable sources by 2030, as part of its NDCs. The director said the target is ambitious and finance is required to make progress on this.

Garae said technology support is essential for countries like Vanuatu to meet their needs and obligations under the 2015 Paris Agreement on Climate Change.

“Currently, the support provided is insufficient for all countries in need. Technology should not be utilized only in the energy sector, it is needed in other sectors such as livestock that is also contributing to emissions,” Garae said.

Livestock is the biggest emission contributor in Vanuatu. Currently, the government is trying to increase cattle production.

Appropriate technology is required to tackle emissions caused by livestock production, considering that the sector plays an essential role in rural livelihoods and the country’s economy, according to Garae.

He said efforts have already been made to reduce waste through the utilization of biogas systems in various schools.

The main priorities for Vanuatu and the Pacific at COP27 are adaptation, mitigation, finance, loss and damage, oceans, transparency, gender, capacity building and technology and global stock take.

Countries do not negotiate individually at COP; they negotiate in groups or blocs. Vanuatu is part of the SIDS and Least Developed Countries. As a member of the Small Island Developing States (SIDS), Vanuatu is recognized as one of the most vulnerable countries in the world to the impacts of climate changes. All countries in the Pacific threatened by climate change have taken a common stance in negotiations.

This year, the country's COP delegation is led by President Nikenike Vurobaravu. Apart from Garae, Vanuatu’s delegation comprises of representatives from different government ministries such as the Ministry of Agriculture, Fisheries, Forestry, Livestock and Biosecurity (MALFFB), Ministry of Lands and Natural Resources, Prime Minister’s Office and State Law Office, Ministry of Justice, Ministry of Foreign Affairs and External Trades, Ministry of Climate Change, and others.

They are joined by Vanuatu’s Ambassador to the United Nations Odo Tevi, Ambassador George Maniuri from Vanuatu’s High Commission in Brussels and other officials negotiating on behalf of Vanuatu.

This story was produced as part of the 2022 Climate Change Media Partnership, a journalism fellowship organized by Internews' Earth Journalism Network and the Stanley Center for Peace and Security. Excerpts were first published by the Vanuatu Daily Post on 5 November 2022 and 10 November 2022. They have been lightly edited for length and clarity. 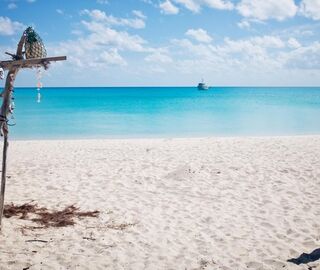