"The rainy period is supposed to end in September each year. Then cold weather will help the durian flowers bloom and develop into mature fruits," she
says. "But the rainy period has dragged on longer, until October or November in recent years. So flowers fall off without any fruit forming."

Irregular weather also brings insects and plant diseases to her 16-rai durian plantation, creating new maintenance expenses. In normal weather, her plantation produces at least 35 tonnes of durian a year. But since 2015, her crops have produced far less, starting with 12 tonnes that year followed by 40 tonnes in 2016 and 24 tonnes last year.

"I don't think one government can solve crop losses. It can't control the weather," she told the Bangkok Post.

Many other farmers in Thailand have reported losing crops to irregular weather patterns and unexpected disasters, such as drought and flooding. Some even fall into debt because they can't make enough money to repay loans used to buy seeds and other farming inputs.

The way extreme weather impacts populations is expected to be discussed by world leaders at the 24th Conference of the Parties to the United Nations Framework Convention on Climate Change (UNFCCC), or COP24, in Katowice, Poland this week. 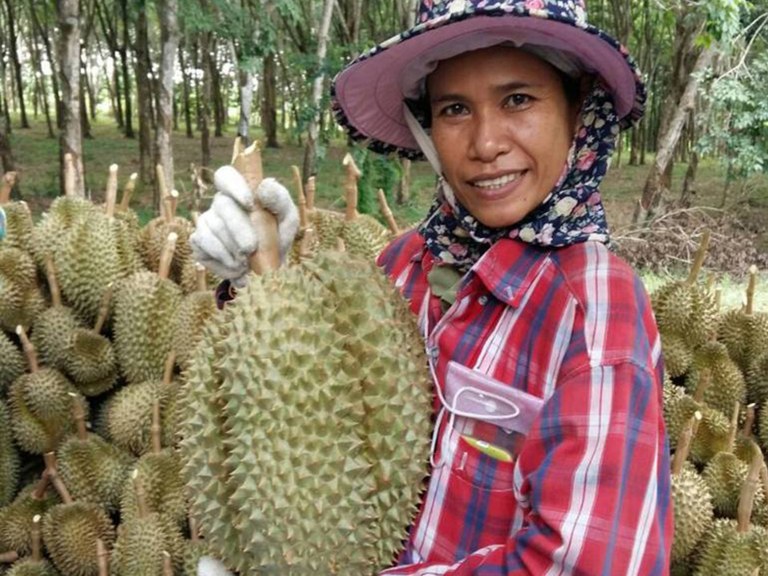 Ampai Meelap, a durian farmer in Thailand's Raying province, witnesses changes in weather patterns that cause her crops to fail and lead to income losses / Credit: Paritta Wangkiat

Those leaders will also discuss how to fully implement the 2015 Paris climate change agreement, a compact where nearly 200 countries committed to reducing the greenhouse gas emissions that contribute to global warming starting in 2020 in an effort to reduce the worst impacts of cliamte change. Countries are expected to formalize their plans to begin reducing their emissions at the conference.

The Intergovernmental Panel on Climate Change, a science-based UN body, says failing to limit global temperatures means the world will face severe impacts from climate change, ranging from extreme weather and food insecurity to deepening poverty and rises in sea level. Thailand and much of Southeast Asia are among the world's more vulnerable areas because of their exposure to extreme weather conditions.

During COP24, international rules, guidelines and monitoring of greenhouse gas emissions reductions will also be negotiated. Surasak Karnjanarat, the Minister of Natural Resources and Environment, is leading the Thai delegation and will give an update on the country's progress.

According to Thailand's Office of Natural Resources and Environmental Policy and Planning (Onep), which oversees climate change policy, the Thai energy
sector successfully reduced greenhouse gas emissions by 45.72 million tonnes of carbon dioxide equivalent between 2013 and 2016, accounting for a
12 percent emissions' reduction.

"Thailand is moving in a good direction as we can achieve the minimum target of emissions reductions," said Onep secretary-general Raweewan
Bhuridej. "But even with a positive outcome, we won't stop taking action to reduce emissions," she added. 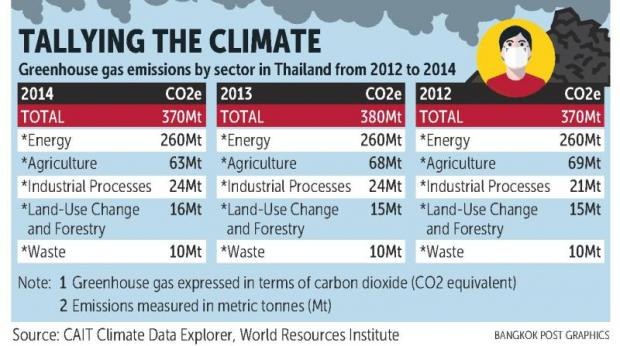 In 2014, Thailand pledged to cut greenhouse gas emissions in the energy and transportation sectors by between seven and 20 percent by 2020 under Nationally
Appropriate Mitigation Actions, a UNFCCC mechanism to reduce emissions in developing countries while promoting sustainable growth.

During COP21 in Paris in 2015, the Thai government pledged another target, which was to cut emissions by between 20 to 25 percent by 2030, or cut at least 115.6 million tonnes of carbon dioxide equivalent in sectors including energy, transport, industry and waste.

To fulfill these pledges, a national committee on climate change policy recently approved the draft action plan on climate mitigation (2021-2030) as well as the
country's first draft of its national adaptation plan, which provides a framework for agencies to integrate climate action into their activities.

"But we're aware that this is not enough," said Ms Raweewan. "We must set a more ambitious target. We must do more. However, we must cut emissions in balance with economic growth," she insisted. 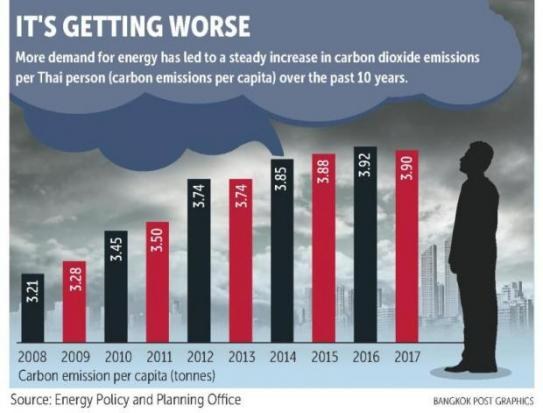 In October, IPCC released a special report on global warming, saying the carbon emissions-reduction targets pledged by countries committed to the Paris Agreement are no longer enough to limit global warming to 1.5-degrees Celsius.

To meet a 1.5-degree C target would require "deep emissions reductions" and "rapid, far-reaching and unprecedented changes in all aspects of society," the
report says.

Challenging those efforts is rising individual consumption, especially in the energy sector. While Thailand is able to reduce emissions from energy generation, data from the Energy Policy and Planning Office shows that carbon emissions have increased from 3.21 to 3.90 tonnes per person between 2008 and 2017.

Similar to a trend seen in other major industrial countries in Southeast Asia, the growing middle-class with more purchasing power has raised the consumption
demand.

Arpa Wangkiat, a Rangsit University academic who is part of Thailand's fossil fuel phase-out movement and has joined other civil society groups at COP24, said the country needs energy reform.

"Every country must work together to create clear-cut policies and practical work programmes to cut emissions," she said. "This is urgent. We are nearing a critical point."