The Battle to Save Kenya’s Crop Biodiversity

The Battle to Save Kenya’s Crop Biodiversity

A stone’s throw away from Lake Elementaita, some 120 kilometers northwest of the Kenyan capital Nairobi in the Great Rift Valley, sits a thick-walled mud structure with small, round basement windows.

Artificial lights illuminate the interior. The wooden shelves lining the walls hold layers of clear plastic containers. They contain seeds of various cereals, beans, trees and other plants, each identified by their scientific names. It seems innocuous, but the activities that go on here are illegal.

The building is one of the frontlines of a David–and-Goliath-like conflict that pits poor, small-scale farmers against a powerful government and majority-state-owned institutions. Stuck in the middle are Kenyan consumers. Their food security and the future of critical traditional African food crops depend on the outcome of this invisible war.

The building near Lake Elementaita serves as a seed bank for local farmers, a place where they can store seeds between harvests and planting seasons, and over the longer term. It enables them to not only protect their vital assets, but also exchange them with each other.

For generations, such seed-sharing among families and neighbors has been a key aspect of on-farm conservation, selection for diversity and the development of new crop varieties.

As a result, the small-scale farmers that produced about 73% of Kenya’s food in 2020, according to the Kenya National Bureau of Statistics, sourced over 80% of their seeds informally, as opposed to buying them from commercial seed companies.

But while age-old farming practices are central to livelihoods and food security, Kenya’s legal framework undermines them. Recent laws that limit farmers’ ability to freely save and share seeds threaten to push many traditional crops towards extinction and prevent farmers from adapting to climate change. As challenges abound, farmers are coming together to push for reforms in the seed sector.

The Kenyan government has a tight grip on the seed industry through both its regulatory framework and its partial ownership of seed companies that control significant shares of the market for seeds of crops such as maize and beans.

Commercial seeds are protected by the Crops Act, 2013 and the Seed and Plant Varieties Protection Act, 2012. Kenya is also a signatory to the International Convention for the Protection of New Varieties of Plants, which was established to protect the intellectual property of commercial plant breeders.

These laws require farmers to buy their seeds from officially approved and registered stores. Other sources of seeds, such as a farmer’s previous crops, are illegal. Any seed exchange between farmers is also forbidden.

In a strict legal sense, farmers do not even own commercial seeds they have bought. Instead, they eternally belong to the plant breeders or the agribusiness corporations that own the intellectual property. Farmers are considered to have only leased the seeds that they pay for, and so legally have no right to save, share, replant, sell or even give their seeds to others.

Farmers also commit a crime if they allow local crop varieties to interbreed with those grown from seeds bought from corporations. Even if pollen from a commercial crop variety accidentally fertilizes a neighboring farmer’s traditional crop, that farmer would be breaking the law if they kept the resulting seeds. They face a fine of Ksh20,000 (about US$170) or a jail term of six months, or both, if found selling or exchanging non-commercial seeds.

While the authorities have so far never prosecuted anyone for breaches of these laws, small-scale farmers and their supporters argue that the government should reform its legal frameworks to not only remove the risk of criminalization but also to proactively support the smallholders who feed the nation.

“Farmers must exert their right to their own seeds and to improve them whichever way nature sees fit,” says Maingi.

He adds that it is critical for farmers to be able to use community seed banks, and that the government should support this with tax revenues to protect farmers from the corporations that aim to control the seed market.

Maingi says Kenya should develop smallholder-centric regulations to foster farmers’ access to quality seeds, which he says is crucial for increasing production of staple crops such as maize, wheat and beans to boost food security.

“The government needs to move with speed to enact farmer-managed, seed systems-enabling regulations to protect genetic resources that belong to Kenyan communities, since they rely on them for their livelihoods,” he says.

The Biodiversity and Biosafety Association of Kenya (BIBA Kenya) is one of the organizations pushing for change. In August 2021, it gathered stakeholders from the government, research organizations, media and nongovernmental organizations to discuss and improve proposed guidelines aimed at promoting farmer-managed seed systems.

The guidelines seek to amend existing laws to allow smallholders to sell, exchange and distribute seeds that they have developed, stored and conserved. This would include allowing farmers to sell their saved seeds to commercial crop breeders. And it would enable farmers to register their seeds to legally protect their unique varieties.

The guidelines, which are still undergoing revision, also propose the creation of a National Committee on Plant Genetic Resources. Its role would be to implement the proposed policies on use of seeds by smallholder farmers, including recognizing and protecting the ownership of indigenous seeds and plant varieties, their genetic characteristics and their use by local communities.

In Kenya, proposed regulations can reach the National Assembly for consideration if they are submitted to a member of the relevant Parliamentary Committee, who then tables them for debate. As at the time of going to press, Silas Tiren, the Member of Parliament who heads the National Assembly’s Committee on Agriculture, could not be reached for comment. Nor could Agriculture Cabinet Minister Peter Munya or representatives of Kephis, the government agency tasked with assuring the quality of agricultural inputs and produce to prevent adverse impacts on the economy, the environment and human health.

BIBA Kenya’s National Coordinator Anne Maina says, however, that civil society groups are now working with scientists and the government to develop and national agroecology strategy that would “encompass many of the reforms that are required in the seed sector”.

Maintaining the biodiversity of indigenous crops varieties is about more than holding on to tradition. The Food and Agriculture Organization of the United Nations (FAO) estimates that 75% of the genetic diversity of food crops has been lost since the 1900s, as farmers worldwide have replaced their diverse local varieties with genetically uniform, high-yielding varieties.

It says that while more than 6,000 plant species have been cultivated for food, just nine of them account for 66 percent of all crop production. And only three — rice, maize and wheat —contribute nearly 60% of plant-sourced calories and proteins in human diets.

This lack of biodiversity is a serious threat to the world’s food supply, as genetic homogeneity exposes crops to outbreaks of pests and bacterial or fungal diseases.

Use and sharing indigenous crop seeds also cushions farmers from exposure to fake seeds packaged as high-quality commercial varieties. This has emerged as a major concern across Kenya’s agricultural sector as unsuspecting farmers are buying such seeds and suffering huge harvest losses.

“If a farmer uses low-quality seeds, the yield will be poor, which will reduce earnings and will make households food insecure,” says Dr Desterio Nyamongo, Director of the Genetic Resources Research Institute at the Kenya Agricultural and Livestock Research Organization. “It is therefore very crucial to make sure that farmers, especially informal growers, have access to seeds of good quality to yield good returns.”

At the same time, the effects of climate change are being felt as previously predictable weather patterns turn erratic. Farmers are being encouraged to shift to crops that are drought-resistant such as traditional crops including indigenous maize, sorghum and millet to boost food security.

One such farmer is John Wainana, who grows a variety of traditional crops on his small parcel of land in Kikopey, a small town in the Rift Valley. Wainana says that he and other small-scale farmers are bearing the brunt of climate change. These days, he says, the droughts are too severe and when it rains, his land is usually flooded.

“It is dry here — it rarely rains,” he says. “But we also can’t water our plants because we don’t have piped water and boreholes, so our crops get destroyed in the harsh weather.”

To cope, the farmers rely on indigenous crops that are drought resistant and perform better than commercial crop varieties in the harsh weather. And now they are coming together to share their seeds and their knowledge.

“We formed this group so that we can better organize ourselves to deal with our challenges as small farmers,” says Wainana. “Our community seed bank is our hope to assure us of our food security.”

Peninah Ngahu is another small-scale farmer in Kikopey. In her role as a ‘seed ambassador’, she is responsible for teaching dozens of other local farmers about the importance of seed conservation and the best farming practices to get the best yields from their farms, many of which measure less than an acre.

“We teach the farmers how to select seeds from their harvest,” she says. “The selected seeds are taken to the community seed bank where they are treated and preserved until the planting season, when each farmer gets what they had saved.”

The Kikopey seed bank is a fairly small, informally-run place. By contrast, the seed bank near Lake Elementaita is much larger and more formal. It was built by Seed Savers Network, a nongovernmental organization that has set up seed banks in several Kenyan counties, and has created a network through which farmers can share seeds among themselves.

“Most of the seeds that we had kept here have already been taken by farmers for planting because this is a planting season,” says Daniel Wanjama, Director of the Seed Savers Network, as he shows the dozens of remaining seed-carrying containers left at the seed bank. The farmers leave a portion of their seed savings at the bank in case of disasters such as fire, floods, pests and diseases, or other conditions that could wipe out their crops.

“This way, no matter what calamity happens, the farmer can always come back to take their spare seeds to plant again,” says Wanjama. “This is like their insurance.” 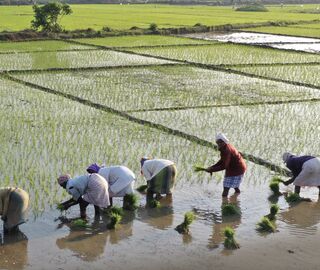