The four dogs keeping wildlife traffickers at bay in Kenya

The four dogs keeping wildlife traffickers at bay in Kenya

Kira, Tibo, Diva and Ram are not ordinary dogs. They are not cheap either. Taxpayers had to cough up about Sh3 million (US$29,700) to ship them to Kenya.

Unlike millions of local dogs, these four have passports and an array of other documents required for international travel.

They are part of the Kenya Wildlife Service's (KWS) Canine Unit, and each one shoulders what is perhaps one of the heaviest responsibilities a dog can have along Kenya’s vast coastline – sniffing out any contraband wildlife trophies from Kiunga to Lunga Lunga.

Together with their six handlers, the dogs, or K-9s, are deployed to key security installations along the coast, such as the Port of Mombasa and Moi International Airport.

Depending on the need to examine suspect cargo, the canines can also be deployed at all other airports along the coast, such as Malindi, Manda and Diani. Occasionally, they also inspect the container freight stations (CFSs) strewn across the port city of Mombasa.

The four dogs have a monumental task of reducing, if not eliminating, the illegal trade in wildlife, considering that this trade has wiped out 90 percent of the African elephant population.

More recently, poachers have trained their sights on the little known pangolin, or scaly anteater, a mammal whose meat is considered a delicacy in much of Asia. In East Africa, men use pangolin scales as an aphrodisiac, although scientific evidence proves they have no medicinal value.

Furthermore, Mombasa port has been identified as a key transit hub for illegal wildlife trophies, alongside other transnational crimes, such as the drug trade and weapons smuggling.

Emmanuel Wafula, head of the Mombasa-based canine unit, says the three malinoises and a German shepherd were imported from Europe at a young age conducive to learning new tricks.

“These are among the few dogs in the country with travel documents. The passports have details about their dates of birth, gender and other ‘personal’ information,” he says.

It took about three months for the new arrivals to master the scent of contraband items.

“The dogs are primarily trained in detecting ivory, rhino horns and pangolin scales. Since their deployment, cases of illegal wildlife trafficking have decreased,” says Wafula.

On a recent visit to the canine unit, we watched handlers conduct a round of trainings that revealed the dogs’ capabilities.

The handlers placed several bags or suitcases in a row, one of which contained a small piece of animal trophy, such as ivory, buried deep inside it. The idea is to mimic the real-life situation that may confront the team in the course of duty.

During the training, the bag with the trophy was shuffled between several positions. Every time the dog came across this bag, it stayed put next to it until a handler reacted to the find. None of the dogs missed the trophy.

“Regardless of how small a trophy is, the dog will find it,” Wafula says.

To assist the dogs further, KWS is employing a more scientific approach to combat the illegal trade in wildlife. Through the Remote Air Sampling for Canine Olfaction (Rasco), air from targeted shipping containers is suctioned out and passed through sterilised filters that are then presented to the dogs. The method bypasses the tedious process of opening the more than 2,000 containers regularly processed at the port.

When a dog encounters a filter that contains minute elements of a wildlife trophy, it will stay put and wait for commands from the handler.

Through DNA sampling at KWS's forensic lab, confiscated trophies can be traced to the exact location where poaching took place.

For their hard work, the dogs get special treats, including a daily grooming using shampoo and a dip once every Sunday to keep them free of ticks and fleas.

They are fed basic pre-cooked dog food once a day, usually in the evenings after a tour of duty. There is only one “privilege” they have to forgo. They are not allowed to breed owing to their busy schedule.

An earlier version of this story was published by The Standard Digital on 25 Jan. 2020. It was produced following a workshop on wildlife trafficking and conservation as part of the Earth Journalism Network's East Africa Wildlife Journalism program.

Banner image: Handlers who work with KWS's canine unit show off some of the dogs' tracking skills / Credit: Peter Muiruri 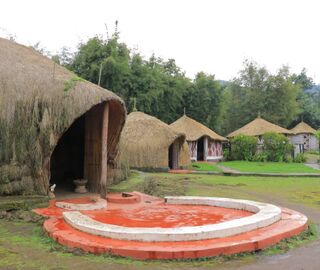 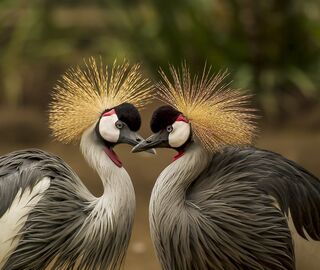