“Shipra is not just a river; it’s much more than that. When the gods battled demons over nectar, a drop of it fell in the river. That’s why it is eternal and that’s why we come here during the Kumbh, to bathe in the river and be closer to the Gods.”

Like his forebears before him, 70-year-old Bhimdev Paliwal was telling a tale of faith and tradition to his grandson and other children in a makeshift tent on the banks of the Shipra River in Ujjain, an ancient city in central India. Paliwal had led a group of his extended family and neighbours from Dausa in the western state of Rajasthan to take a holy dip during the month long Kumbh Mela in May.

Paliwal — and so many more like him — would have been shaken to the core had he known the river that promised everlasting life was itself dying. The water that flowed past placidly had been pumped in from the Narmada, scores of miles away. Decades of neglect and mismanagement, and the recent years of drought, had reduced the Shipra to less a river and more a stinking drain of domestic and industrial waste. It was on life support, fed on Narmada water driven by electric pumps through 50-km-long concrete pipes.

It is not the first time a river in India has been ‘resurrected’ in this manner. The Sabarmati in Ahmedabad was magically transformed in 2005 when water from the Narmada meant to irrigate parched farms in northern Gujarat was diverted to its dead channel instead. The cricket matches on the dry riverbed were left behind and a massive riverfront development project is now expected to add gloss to the city.

The National Democratic Alliance government in New Delhi has put its weight behind a mammoth river-linking programme that is expected to cost INR 5.6 trillion (USD 83 billion) at 2002 prices, with an annual outlay of INR 1.6 billion to be spent over 35 years. The plan, which seeks to transfer “excess” water from one river basin to another for irrigation, domestic and industrial use and generate 34,000 MW of hydropower, has been frequently criticised for being hydrologically and environmentally unsound and hugely expensive. The federal government has already announced many such linking projects despite misgivings by experts and affected populations. See: Linking rivers will not save Bundelkhand

The rejuvenation of the Sabarmati in Gujarat and the Shipra in Madhya Pradesh by diverting water from the Narmada are showpiece projects of the linking scheme that pay fat political dividends, provincial administrations have found. “Rejuvenating Sabarmati was an opportunistic move. It was not planned,” says Somnath Bandyopadhyay, associate professor at the School of Ecology and Environmental Studies at Nalanda University. “The water of Narmada from the Sardar Sarovar dam was made available before the irrigation infrastructure was ready.”

The diversion of Narmada waters into the Sabarmati channel had at least one major consequence. “The people in Ahmedabad loved the sight of a flowing Sabarmati,” says Bandyopadhyay, who worked at Gujarat Ecology Commission for many years. “Public opinion was created and riverfront development became possible.” Sabarmati is a dead river for most practical purposes, he says. “All dams on rivers in north Gujarat are over-designed and hence water in the downstream is extremely rare. This is true for Sabarmati downstream of Dharoi. Circuses and cricket matches were common on the Sabarmati riverbed in Ahmedabad before the Narmada waters filled it.” 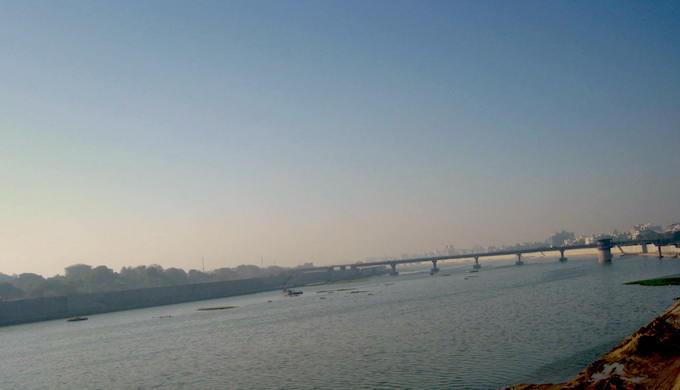 The rejuvenated Sabarmati in Ahmedabad. (Photo by Soumya Sarkar)

The decision to rejuvenate the Sabarmati was taken by the state government led by Narendra Modi, who was then chief minister of Gujarat. The Hindu nationalist Bharatiya Janata Party (BJP) and its allies rode to power in New Delhi with a huge mandate in 2014. As Prime Minister, Modi has continued to support the interlinking of rivers.

The Shipra-Narmada linking project was announced with great fanfare by the Madhya Pradesh government in May 2013 before state assembly elections were held in November later that year. The incumbent BJP led by chief minister Shivraj Singh Chouhan won with a comfortable majority. It is possible that the project announcement played a role in BJP’s excellent performance in the Malwa region. The flowing Shipra made a happy impression on the gathering of as many as 60 million people in the Kumbh Mela this year.

Such diversions of large quantities of water are inevitable if the authorities continue to indulge in short-term populism, experts say. “The politics of water is extremely tense and complicated in India, where expediency often overrides good sense,” says Himanshu Thakkar, co-ordinator of South Asia Network on Dams, Rivers and People, an advocacy group.

“The basic issue is to de-politicize water management. If it remains political, it will certainly move in the direction of vested interests — sugarcane farmers in Maharashtra, industries in Kachchh (in Gujarat) or Delhi,” says Bandyopadhyay. “Governments will make allocations for competing uses as per their political considerations unless there is a way to freeze allocations — as a proportion of total water availability in a river, perhaps —and then allow the market to determine its best use.”

Such unplanned diversions are a subversion of people’s rights, says Thakkar. “There has been a gradual transfer of water rights to urban and industrial users, away from farms and ecosystems. This is being done in a completely non-transparent manner. This will lead to unrest and volatility in many sections of society.”

Bandyopadhyay agrees. “Essentially what we are witnessing is a race among states to stake claim on interstate river waters, and the Narmada is no exception. People’s traditional rights are extinguished (by present laws) the moment state infrastructure is built.”

“The law of the land says that states can access river waters as per their need. Need is defined in terms of their capacity to use water, chiefly for irrigation. The Kaveri water dispute is a classic example. Downstream Tamil Nadu built huge a canal network to establish its claims over Kaveri waters and only a fraction has been used,” he points out.

There is no way to entirely do away with inter-state rivalry over waters of a river basin. As temperatures rise across India due to climate change and water becomes scarcer, this competition has the potential to cause great harm. “The allocation of water of river basins has to be done in an equitable and transparent manner,” says Thakkar. “The government needs to involve all stakeholders before it chalks out any plan to redistribute this vital resource.”

“What is required is the recognition of people’s rights on river waters. Once the rights are established, transfers should be allowed in order for the water to flow to its most efficient use, whether agriculture, industry or domestic supplies in cities,” says Bandyopadhyay. “California is a good example of this.” 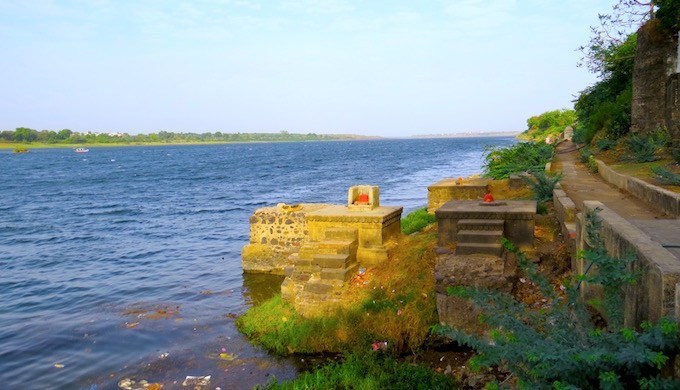 The robust flow of the Narmada at Maheshwar in Madhya Pradesh. (Photo by Soumya Sarkar)

Thakkar is worried that the decisions of the government will increasingly be skewed towards business interests. Industries in Pithampur and Dewas near Ujjain, which expect to benefit from the Shipra-Narmada link, have already started lobbying the government for increased allocations. “In absence of credible wastewater treatment system and governance, more water for industry would mean more untreated industrial effluents into the Shipra River, worsening the problems for the river and the people,” Thakkar wrote in a notein 2014.

“Water is now a scarce resource and must be allocated to current users,” says Bandyopadhyay. “The government only needs to enforce rights and uphold contracts.”

Rajendra Singh – known as India’s waterman, winner of the World Water Prize and the Magsaysay Award – has repeatedly said the right to water should be as fundamental as the right to food, and has demanded that this be enshrined in law. See: India’s waterman demands water security law

Before the 2014 parliament elections, Singh teamed up with other water right activists to form the Jal Jan Jodo Abhiyaan (Water and People Connect Movement). They drafted a water security bill that seeks to transfer water rights to village councils and municipalities, the smallest unit of democratic government in India. It is perhaps instructive that the proposed legislation got no mention in any political party’s manifesto before the polls or in the programme of any central or state government ministry since then.