With the Peace Agreement and the end of a 50-year-old conflict, hundreds of biologists and scientists are scouring areas of Colombia where they had not been able to work and are broadening the encyclopedia of our natural riches. At the same time, they are beginning to understand how many of these places are rapidly disappearing.

One year ago, coinciding with the signature of the Peace Agreement, a group of Colombian and foreign scientists immersed themselves during twelve days in the mishmash of forest, grasslands and rocky formations between the La Lindosa Range and the northern tip of Chiribiquete National Park, an area that for years was well-preserved but is now seeing deforestation encroach at an alarming speed.

The risk has a proper name: the Marginal Jungle Road. This highway, that seeks to connect the 381 kilometers from San Jose del Guaviare to San Vicente del Caguan, is only in its planning phase at the Ministry of Transportation, but has scientists very worried because its outline has already become –according to IDEAM, the national meteorological institute- in one of the eight largest deforestation hotspots in the country.

The patches of forest where this group of scientists from Chicago’s Field Museum and the local Foundation for Conservation and Sustainable Development worked is already heavily transformed and relatively inhabited. However, it still is home to a surprising biological richness. In two weeks of field work, they registered 1.100 species of plants, 89 of fish, 32 oh amphibians, 58 of reptiles, 226 of birds and 48 of mammals. Of them, at least 14 are entirely new for science: 2 plants, 10 fish, one snake and one frog. 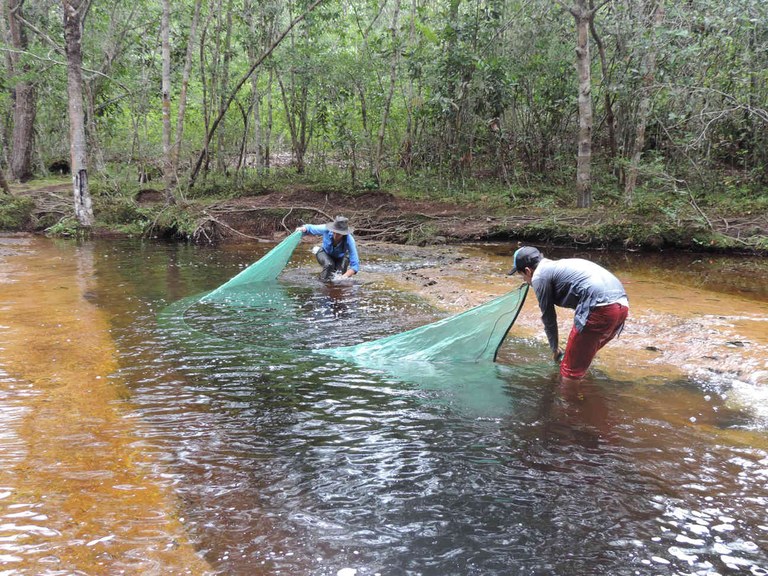 “With the post-conflict, new possibilities are appearing to visit these places. Some researchers had been to this type of ecosystems, but access is now much simpler,” says Andres Barona, a botanist at the Sinchi Amazonian Institute who made special finds.

In two different spots of the Lindosa Range, he and his colleagues found a new species of Zamia –a seemingly flattened, fern-like shrub considered a living fossil and fancied by private collectors for ornamental plants- and a new species of Melastomataceae, the same family as the glory tree.

“Just 200 meters away from the hamlet of El Capricho we saw a large group of Humboldt’s woolly monkeys, something you usually only see in the heart of the jungle. They were very calm, unconcerned by us. This caused quite an impression on me. Hopefully, steps can be taken to ensure they remain there forever,” says Peruvian biologist Alvaro del Campo, who works for the Field Museum in Chicago and led the expedition.

They used a methodology developed by the Field Museum –one of the leading natural science institutions in the world- called ‘rapid social and environmental inventories’. While scientists identify local species working with local communities, a social team documents the relations of these inhabitants with their natural surroundings.

The result is a mapping that allows one to surmise, in a short time, the biological and cultural wealth of an area that had not yet been seriously explored by science. In fact, they are now prepared to immerse for three weeks into the remote rainforest of eastern Caqueta, on the border of Chiribiquete National Park.

“If this buffer breaks, we will lose the connection between these ecosystems, the ability that species have to move around and, ultimately, all this biodiversity. And, depending on the type of use given to that land, if it ends up being cattle or African oil palm, we might lose it forever,” says biologist Diana ‘Tita’ Alvira, the only Colombian working at the Field Museum, as part of the more anthropological team.

The issue, according to Alvira, is that national parks do not function properly if they become islands in the midst of a sea of pastures. This is the crux of the connectivity between animals and plants: they need to move, dispersing their seeds and reproducing, enrichening the genetic pool of their communities. The same happens to water: all the rivers in the Amazon basin, which ensure the proper functioning of the largest green spot in the planet, are nourished by the water flowing down from the páramos of the Andes.

In this case, this corridor of forests, grasslands and rocky outcrops at the height of the Guayabero River are the largest patch of green on the line running from the Andes to the Amazon, connecting national parks and ecosystems from the Sumapaz moors on the outskirts of Bogota to Amacayacu on the edge of the Amazon River. The stress signs are quite visible.

“We cannot determine the exact effect of a road, but this is why we are looking at the smaller tributaries, which is where most species that are sensitive to the physical and chemical composition of the water are found,” says ichthyologist Javier Maldonado, who teaches at the Javeriana University and was part of a team that found almost a new species of fish per day, including two translucent catfish measuring less than 3 centimeters. 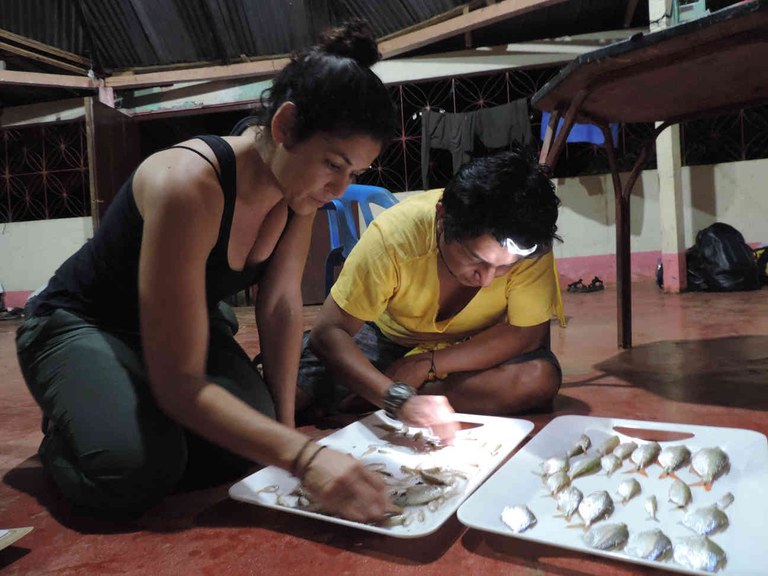 Scientific research in the vicinities of the Marginal Road fulfills another mission: by documenting the wealth of this area, it is thickening the dossier that will allow the conservation of the Chiribiquete Range, which –with its almost 28 square kilometers of rainforest- is Colombia’s single largest contribution to mitigating the effects of greenhouse gases to global temperatures.

This remote national park, the largest in Colombia, is deemed by scientists a truly ‘lost world’, due to the uniqueness of its rocky pre-Cambrian tepuys rising in the middle of the jungle, to the fact that each expedition reveals dozens of new species to science and to its thousand-year rock art of still unknown authors. Little wonder the respected Canadian ethnobotanist Wade Davis describes it as the ‘Sistine Chapel of the Amazon’.

Although in 2013 the Santos administration doubled the park’s area, making it the size of Belgium and the second largest in South America, there is still a risk factor on its northern area, linked precisely to the accelerated deforestation in the Marginal Road area that could interrupt the existing connectivity with the Andes and the Orinoco grasslands. 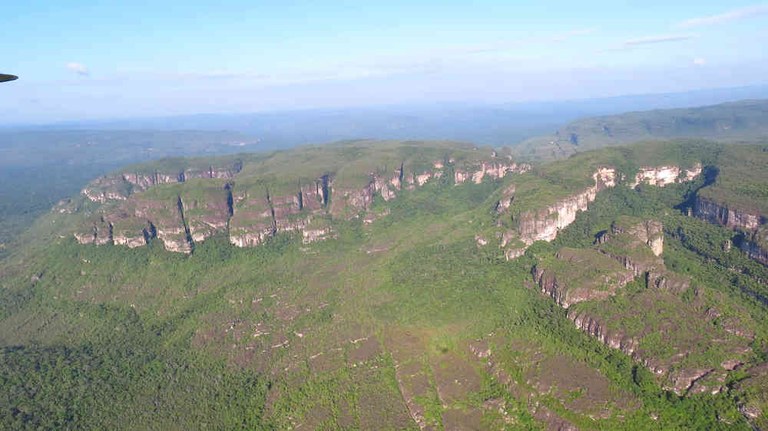 This is why scientists and the National Parks agency are working on a two-pronged strategy to guarantee that be safeguarded in the same state as today.

On one hand, they just nominated the park to UNESCO’s World Heritage list, a status that would give it more visibility and the possibility to mobilize resources to protect its natural and cultural treasures. The technical inspection led by the International Union for Conservation of Nature and UNESCO –the UN’s cultural arm- is slated for as soon as the rainy season ends and the decision should come next July.

On the other hand, a proposal to enlarge the park is underway, seeking to protect the forests to the north and the west. The exact polygon that National Parks will submit to the Academy of Natural Sciences has not been defined yet, but they have already begun the process of consultation with two of the indigenous reservations -Yaguará and El Itilla- within the area. 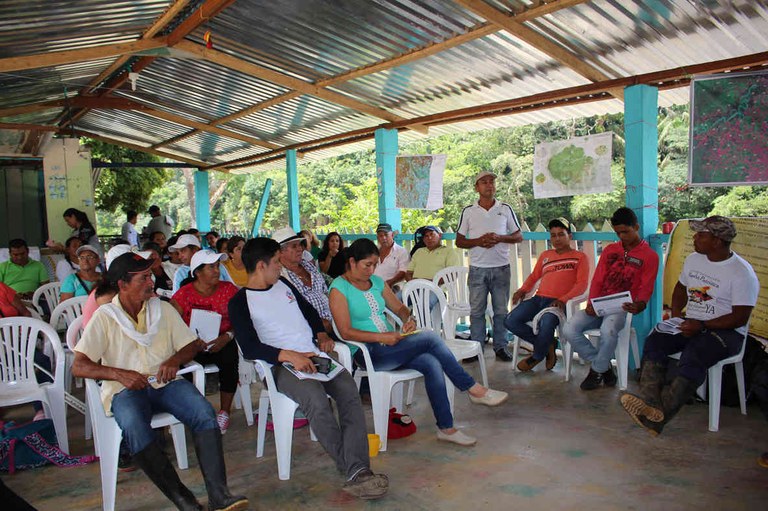 One of the key arguments is that the ecosystems and fauna in this area are distinct from those in the current park.

The findings of biologist Gonzalo Andrade, a butterfly expert and professor at the National University, are a good example. So far 179 butterfly species have been registered within the park, nine of which were new to science. North of the park, in the area of influence of the proposed road, 293 other species have been documented. Of these, 12 were new to science and different to those discovered in Chiribiquete.

If this green corridor breaks, we risk losing a Noah’s ark that we are only beginning to discover. 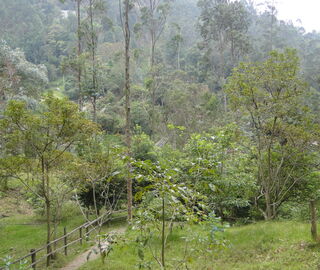