The Rising Stars of a Sinking Island

The Rising Stars of a Sinking Island

From rising seas an island finds sport, and a campaign to combat climate change

When 29-year-old Roy Funusui Mafane stood on the podium to receive the 2016 Solomon Games Beach Soccer Championship trophy and gold medal, he envisioned the future of the sport for him and his boys and the cries of his people for a better future.

The captain of the beach soccer team from Kwai, a tiny island off the eastern coast of Malaita province in the Solomon Islands, felt the lifting of the burden he had shouldered before and during the competition as he shed tears at the award’s presentation.

“During the competition I know everybody’s weight is on our shoulders,” said Mafane. “I told the boys that it is our time to shine. It is our time to prove who we are – the rising stars of a sinking island of Kwai.” 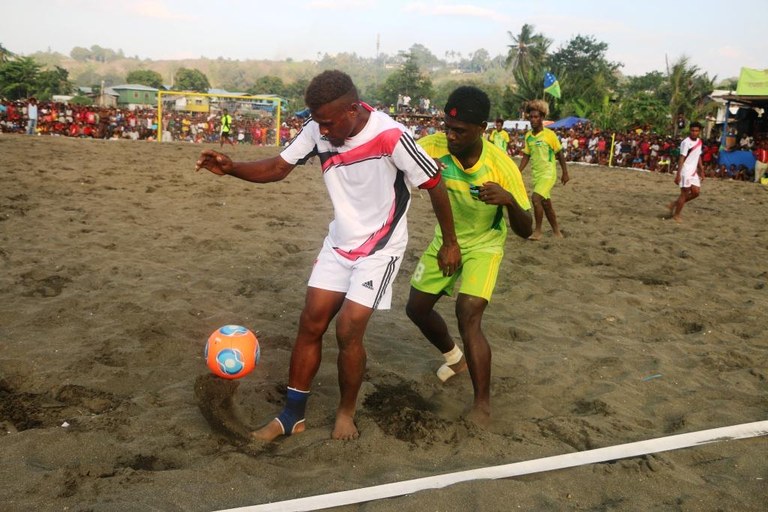 Team Captain, Roy Funusui Mafane, controls the ball while a Western Province player runs in for an attack during the grand-final match of the Solomon Games 2016 Beach Soccer Championship in Honiara / Credit: Ronald Flier Toito'ona

Kwai has long been known for its white, sandy beaches. In more recent years, however, it has gained attention for bearing the brunt of sea-level rise and coastal erosion.

Encroaching waters have eaten away at traditional food gardens and homes. The situation was exacerbated starting in the mid-1980s when Cyclone Namu washed away trees that held back waves and propped up sand dunes.

Soon after that the grassy pitch where the island boys played soccer went too, replaced by the white sands that have earned Kwai acclaim.

“We all know that the effects of the sea level rise are affecting us,” said Timmy Fiulaua, a villager and former football player that has watched the transformation of the old soccer field.

“Changes have occurred in front of our very eyes, but there is nothing much we can do to escape.”

So they’ve made the best of the loss of their grass-covered pitch to create a new sport in their homeland -- beach soccer – and are using it to raise awareness about the need to respond and adapt to climate change. 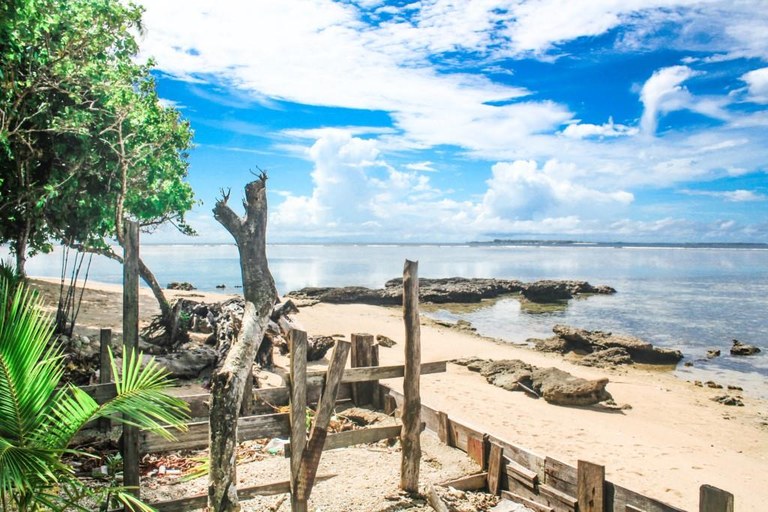 For the past several decades, residents have seen their island eroded and washed away by rising tides and the sea. It is taking its toll on the inhabited island of Kwai / Credit: Ronald Flier Toito'ona

The Solomon Islands reigned for the next five consecutive championships, until Tahiti won the top spot in 2011.

After that, the Solomon Islands Football Federation (SIFF), the nation’s top football body, stopped organizing a beach soccer league and the sport seemed to die a natural death.

But not in Kwai.

It arrived there in 2009 and was officially launched in 2015 with support from the Malaita provincial government, the Solomon Islands Football Federation (SIFF), and the Malaita Football Association (MFA).

The following year, in 2016, beach soccer was once again featured in the Solomon Games and the team from Kwai Island emerged victorious – representing Malaita province. 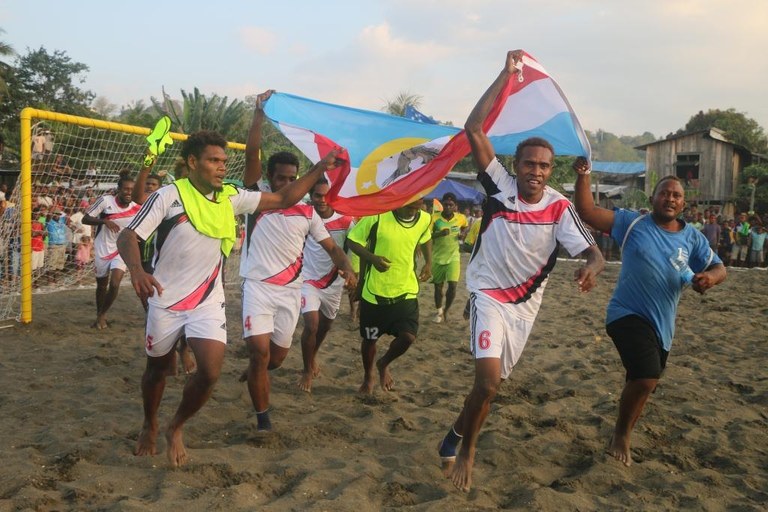 In the Beach Soccer competition during the Solomon Games in 2016, the team from Kwai claimed gold after their unbeaten run in the biggest tournament they have been to outside of home  / Credit: Ronald Flier Toito'ona

Their performance and victory became the talk of the country. The fact that the team had appeared from nowhere to snatch the top prize not only put Kwai on the map but helped redevelop beach soccer in the island chain.

Community elders in Kwai decided to take advantage of the spotlight to launch a campaign to address the impacts of climate change on their island. Thus, the slogan “The Rising Stars of a Sinking Island” was born.

Carrying the hopes of the people

For the island boys, the game is played with passion, courage and determination that one day they will be part of something big.

In the sinking island of Kwai, the boys are regarded as the game changers in the fight against climate change.

It wasn’t always this way. For many of the older players the birth of the new sport was somewhat odd in the beginning. But they learned to adjust to the changing of the island topography.

For the island’s young footballers, the sport is something they’ve grown up with and many have become skilful and enthusiastic beach soccer players.

Many of the young players are growing up witnessing the changes that are happening to their island home, with the every day oral history being taught to them by their parents and grandparents.

With little formal knowledge of global warming and its impacts, many residents didn’t attribute climate change to the loss of their pitch. But they have fought to resist it. 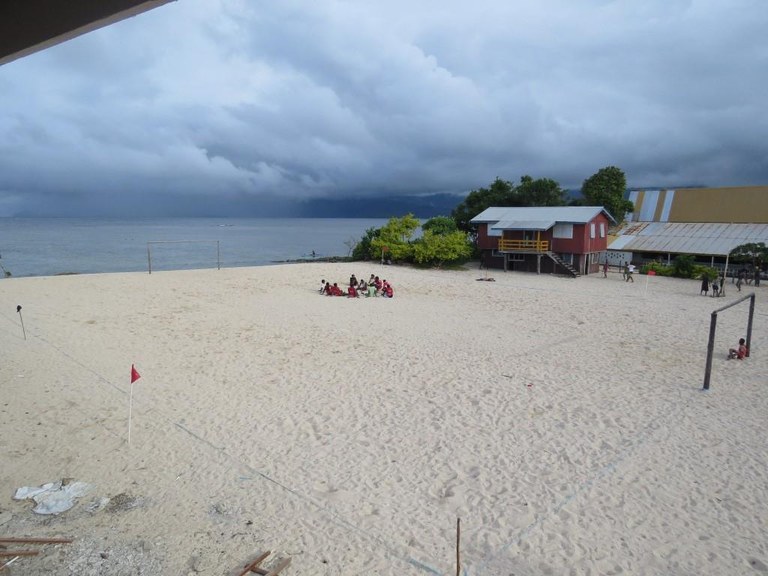 For decades community elders have appealed for assistance from the government in the form of relocation and the building of a sea wall around the island. Various delegations from the Ministry of Environment and stakeholders including the Malaita provincial government, World Vision, and other non-governmental organisations, have visited the island to conduct research and surveys and host discussions about possible ways to assist the island community in addressing the effects of climate change. But nothing positive was seen coming.

A spokesperson for the Solomon Islands Ministry of Environment, when interviewed, said the lack of funding is one of the major contributing factors that have forced the ministry not to play its mandated role.

“The Ministry of Environment over the years has not been able to address issues surrounding climate change and its effects to local Solomon Islanders. The problem here is to do with financial backing, as the ministry’s budget every year is not that huge like other ministries, such as education, health, and security," the spokesman said.

“But be rest assured that climate change is a huge problem for a country like Solomon Islands, and the ministry will do all it can to help the sinking atolls of the Solomon Islands,” he added.

The beach soccer team was seen as a way to share the island’s story with the world and request support to combat the increasingly severe impact climate change is inflicting on their homes and livelihoods.

“The message is clearly stated in the slogan, that we are the rising stars of the sinking island of Kwai,” said player Eric Tom. “We carry the hopes of the people in the village.”

Through beach soccer and climate change awareness-raising activities, Tom said the team hopes its message can reach the government and lawmakers and prompt them to take action.

Aside from keeping the youth of the island active, the sport also gives them hope since they too are victims of the effects of a changing climate, Tom added. 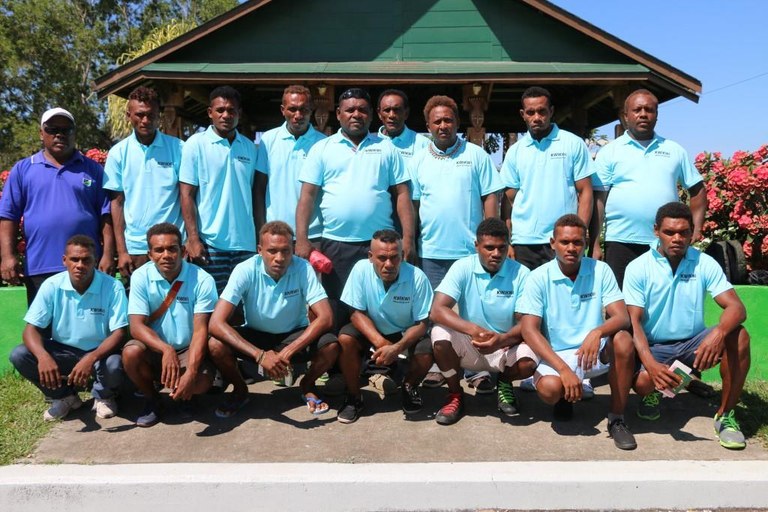 The Beach Soccer team, with Member of Provincial Government (MPG), Finely Fiumae (far left), prior to their departure to Vanuatu in September 2017, on a Sports Outreach programme / Ronald Flier Toito'ona

The success of their campaign has already started bearing fruit.

Since 2016, the Kwai Island Beach Soccer team has received widespread support from the Solomon Islands Football Federation (SIFF), the Malaita Football Association (MFA) and the Malaita provincial government through money, sporting gear and other materials to help promote beach soccer across the province and country.

Its success on Kwai has earned praise from island residents.

“Coming from the island setting and as victims of sea-level rise, we have now seen the potential of the game in our village, and through its impacts in our lives we believe this game will prosper,” said Ramoni Loke, a player and Kwai Island’s youth representative.

It has also helped fulfil a dream long held by Eddie Omokirio, vice president of SIFF, president of MFA and a former meteorologist.

“I am very conscious about the status of beach soccer in the country,” he said. 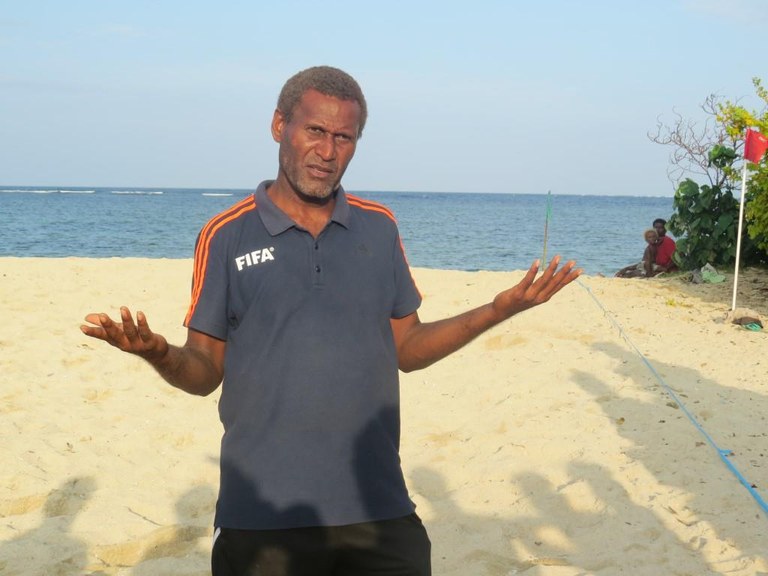 After Tahiti was given direct entry to the World Cup last year, Omokirio said it was no longer a priority for the 11 nations of the Oceania Football Confederation (OFC) to host beach soccer competitions.

“So, at the back of my mind, I don’t just think about improving the standard of beach soccer in Malaita and the Solomon Islands, I look beyond that,” he said.

Nature will continue to take its course

For the inhabitants of Kwai Island, the changing climate and sea level rise is a reality they deal with daily. They continue fishing – despite the changing fish patterns -- and for the past 30 years or so they paddle to the mainland for gardening, as the island can no longer accommodate food gardens.

For years they have built seawalls around the island, with no direct support from the government. Most have also refused to relocate to the mainland, not wanting to leave their ocean life behind.

“We are the salt-water people and we have a very close bond to the beach and island environment,” said Erastus David Mafane, an elder living in the island of Kwai.

“Relocating to the mainland might be a better idea for others, but not us. If we are to be relocated somewhere, that would mean a total new life and the beginning of a new era for us,” Mafane, 58, said. 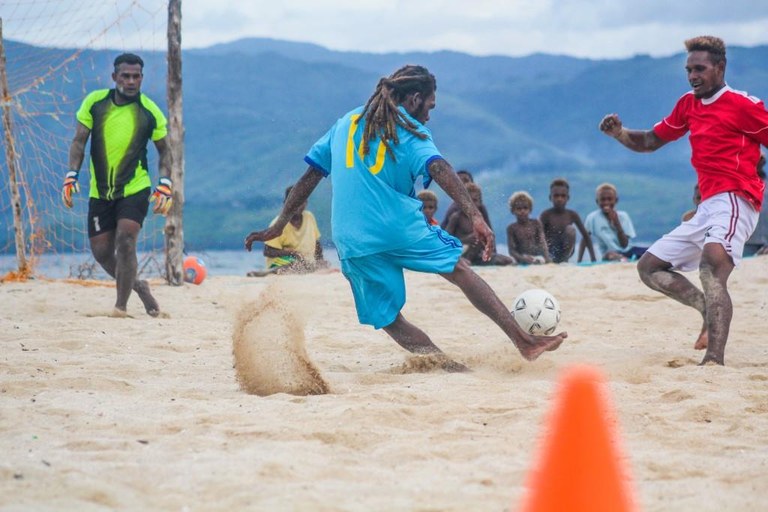 Just as the game is played by Beach Soccer powerhouse Brazil, it is on this naturally formed soil that the Kwai team learns all the tricks of the soccer code / Credit: Ronald Flier Toito'ona

Manasseh Maelanga, Member of Parliament for East Malaita and the current leader of the parliamentary opposition group, said the government since 2008 is discussing a relocation plan with residents of the island, but to date nothing has been decided.

“It is a big plan for the inhabitants of the island. What we are working on now is resettlement,” said Maelanga. No matter how good the government’s intentions, however, “nature will also take its [course],” he added.

The players say they would like to see their representative in the national parliament take on the issue of climate change more seriously. By doing so, their ability to respond and adapt to the impacts of climate change could get a boost.

For now, however, supporters say they’re staking their hopes on the beach soccer team.

“We look at them as the voice for the voiceless,” said David Kausimae Iro, a former player and now devoted fan.

Earlier this year his hopes were further boosted when five team members joined the Solomon Islands National Beach Soccer team as it prepares for another OFC Beach Soccer Championship scheduled for 2019.

This article was reported with support from Internews' Earth Journalism Network.