Rising waters and illicit logging are killing the Sundarbans' mangroves, the natural wall that protects the coasts of both India and Bangladesh.

It was when the body of a long-dead friend surfaced near her front door that Bulu Haldar knew her house was as good as gone.

For weeks, the embankment shielding East Dhangmari, in the Khulna district of southwestern Bangladesh, had been threatening to sink into the Pusur River. First, a ferocious storm had ripped into the outer layer of concrete. Then, at the end of 2017, the river had begun eating into the porous earthen wall itself. Locals rushed in sandbags, but that bought only a few days’ respite. When the river finally surged into the cemetery across from Haldar’s garden, disinterring skeletons and contaminating the village’s drinking pools, it filled her one-room hut waist-deep in muddy brown water.

“There was nothing else I could do to protect my house,” she said. “We were powerless, like children.”

Haldar, a meticulously dressed widow of about 50, had at least had some inkling of what was to come. She’d watched as the nearby Sundarbans, a vast mangrove forest that flanks the village, had retreated, its trees looking increasingly weedy. She’d noted how the water appeared to draw strength from the forest’s weakness. The only surprise, Haldar insisted, is that the village’s earthworks held out for so long. “The trees defended us, but we treated them very badly,” she said. “So now we are all suffering the consequences.”

In Bangladesh and the neighboring Indian state of West Bengal, there are thousands of villages like East Dhangmari—places that are losing their natural defenses against climate change just as it is intensifying. The land is paper-flat and crisscrossed by rivers bulging with meltwater from the Himalaya. Cyclones frequently roar in off the Bay of Bengal, sometimes killing thousands. Flooding is pervasive. 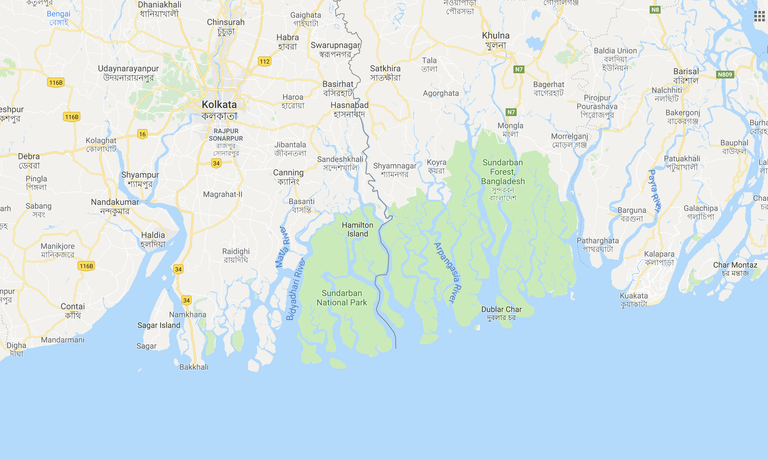 The Sundarbans spans nearly 4,000 square miles of India and Bangladesh along the Bay of Bengal. For the 7.5 million people who live in the region, the forest is a natural barrier against tides and cyclones. But as people cut the trees and rising seas bring saline waters, the forest and the land itself are shrinking. More than a million coastal residents have already migrated north / Image via Google Maps

Some farmers in Bangladesh—a country the size of Iowa with a population of 160 million—refer to their homeland as a divine prank: The soil is fantastically fertile, but you’re always in danger of getting washed away. In 1998 an especially monstrous flood inundated about 70 percent of the country.

One thing the region’s coastal communities felt they could always bank on, though, is the Sundarbans, the world’s largest contiguous mangrove forest. Spanning nearly 4,000 square miles on both sides of the Indian-Bangladeshi border, this dense swamp of flood-tolerant trees stands as a green wall, absorbing storm surges and blunting even the worst cyclones. For villagers, the forest is also an abundant source of honey and its waters a source of fish. “The Sundarbans is our mother,” said Joydev Sardar, secretary of the fishermen’s association in Harinagar, Bangladesh. “She protects, feeds, and employs us.”

But after years of abuse from man and nature, the mangroves seem to be nearing their limits. Illicit logging, mostly for building materials to house the region’s booming population, has thinned out the periphery of the forest. At the same time, increasing water salinity caused by the encroaching sea is killing off many higher value, storm-stopping tree species, such as the sundari that gives the forest its name. The salinity assault comes from both land and sea: Upstream dams on rivers in India have reduced freshwater flow into the Sundarbans, while sea-level rise caused by climate change is flushing more salt water into the mangroves.

“The salinity front is just going up and up and up,” said Mashfiqus Salehin, a professor at Bangladesh University of Engineering and Technology’s Institute of Water and Flood Management. “New areas will salinize, and moderately salinized areas might become unlivable. It’s becoming a big problem.” In the worst-case scenario, in which sea levels rise by more than six feet this century, Bangladesh alone stands to lose some 800 square miles of mangroves in the Sundarbans. The best-case scenario is a loss of roughly 80 square miles. Salehin and other scientists fear even that much might prove disastrous for a country so poor the forest is besieged by human needs.

The land itself is disappearing. Without the tangled roots of the mangroves to stabilize it, land erodes into the sea—and with upstream dams trapping river sediment, it’s not replenished as it once was. 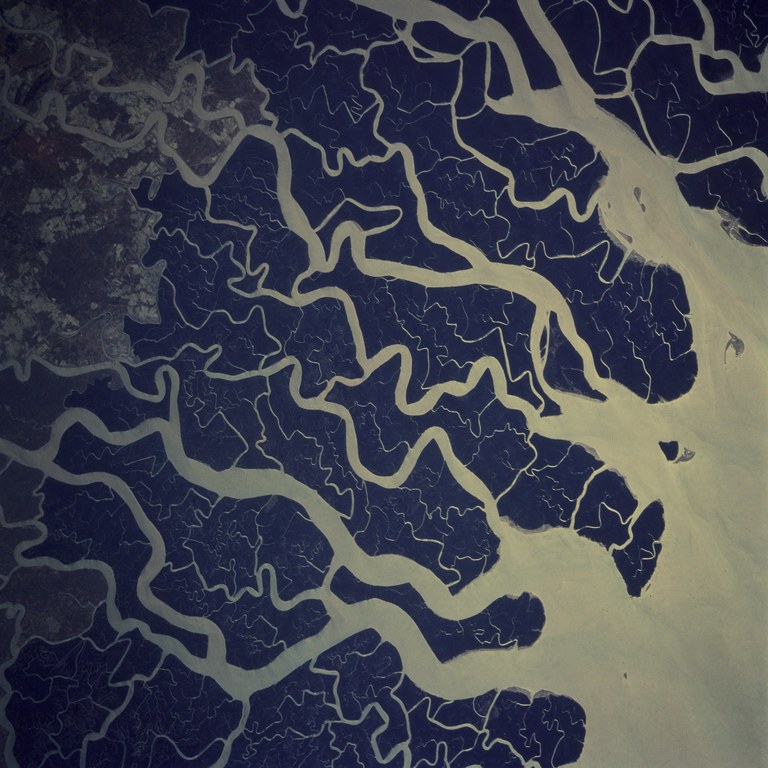 A view of the Ganges River delta taken from NASA's Marshall Space Flight Center. Hundreds of miles south of its source in the Himalayas, the Ganges River enters the Bay of Bengal. The southern part of the delta has a darker appearance because of tidal forests, swampland, and mangroves known as the Sundarbans / Credit: NASA via Creative Commons

The islands in India’s Hugli River, in the Ganges estuary on the western edge of the Sundarbans region, illustrate advanced stages of the decay. At least three islands that a century ago were covered in mangroves—Lohachahara, Suparibhanga, and Bedford—have vanished. Others are eroding fast: Sagar Island has shrunk by about 20 square miles since the mid-20th century, even as its population has swollen with new arrivals from its disappearing neighbors. Crop-growing conditions on Sagar have deteriorated so much that residents now survive largely off seasonal labor elsewhere.

In some parts of the Sundarbans, the sea is advancing about 200 yards a year. “The people around the Sundarbans will lose a lot,” said Tuhin Ghosh, an associate professor at Jadavpur University in Kolkata. “This is happening now.” But even cities like Kolkata and Dhaka that lie some distance from the vanishing mangroves, he added, will find themselves “extremely exposed to cyclones and storm surges.”

In February 2018 part of the embankment that holds back the Chunar River west of East Dhangmari, Bangladesh, collapsed for the third time in a year. Sixteen houses were swept away in what for locals had become an almost routine tragedy. But as the catalog of misfortunes mounted over the following months, even the oldest, most judicious residents knew these were no ordinary crises. Rice yields during the 2018 dry-season harvest were way down—often well under a ton an acre, which pushed up food prices. In many fields, vegetables simply wouldn’t grow in the salty soils.

“Because of the water damage, it sometimes seems like only the carpenters have work,” said farmer Bimol Sardar.

In the spring of 2018, a disease that has proliferated across some of southern Bangladesh struck this quiet corner of the country. Cholera, thriving in the hotter temperatures and increasingly brackish waters of the Sundarbans, has come roaring back in the swamps in which it was supposedly born. When I visited, the local doctor was overwhelmed.

“Almost every one of my patients is here because of water-related diseases that were nowhere near as much of a problem before,” said Shivapada Mondol. “The circumstances are verging on dangerous.” On a stretcher outside his office, a skeletally thin old man retched loudly; the man’s daughter tried to push more fluids into him. 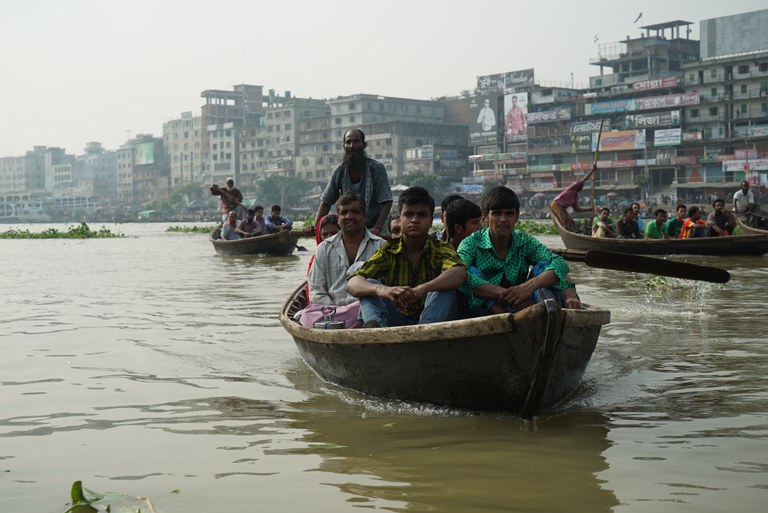 More people in coastal Bangladesh are fleeing their homes due to erosion and increasing salinity and taking refuge in Dhaka, the already overcrowded capital / Credit: Blese via Creative Commons

Finally, as if to illustrate the impossibility of living in the new Sundarbans, several dozen families pulled up stakes in April and moved to Dhaka, the capital of Bangladesh. No longer able to make much of a living off the land, they opted to join the million to 1.5 million other villagers from southern coastal communities who’ve already relocated to the overloaded city, according to Atiq Rahman, director of the Bangladesh Center for Advanced Studies. The World Bank suggests that by 2050, more than 13 million Bangladeshis—including most of those on the margins of the Sundarbans—might migrate because of climate-related crises. The forecast in West Bengal is similarly alarming.

Despite the challenges, some people here remain guardedly optimistic about the future. The governments on both sides of the border have gotten a grip on the worst of the mangrove cutting, heavily punishing offenders, and they’ve learned from past natural disasters. By building more cyclone shelters and deploying up to 150,000 volunteers before major storms strike, Bangladeshi officials have drastically cut death tolls. In even the poorest parts of the Sundarbans, villagers have displayed an impressive capacity for adaptation. As salinity surges, they’ve abandoned rice farming in favor of shrimping.

But in the battle to preserve the mangroves—and in the long run, perhaps Bangladesh itself—the difficulties are increasing. Dhaka has green-lit the construction of a large, Indian-backed, coal-fired power station at Rampal, on the edge of the Sundarbans, a move that could pave the way for other polluting industries. China is proposing more dams in the Brahmaputra basin, potentially jeopardizing the mangroves’ remaining freshwater supply. And the climate keeps on changing, bringing ever more erratic rains, storms, and temperature swings.

As the troubles mount, some locals wonder: In the land that mangroves built, will climate change be king?

“The Sundarbans built this country,” Bulu Haldar said. “Perhaps the Sundarbans”—or the loss of this forested region—“will destroy it.”

This story appears in the July 2019 issue of National Geographic magazine. Funding for the reporting was provided by Internews’ Earth Journalism Network. Peter Schwartzstein is an Athens-based journalist who focuses on food, water, and climate.

Banner image: One thing the region’s coastal communities felt they could always bank on is the Sundarbans, the world’s largest contiguous mangrove forest. Credit: Kingshuk Mondal via Creative Commons