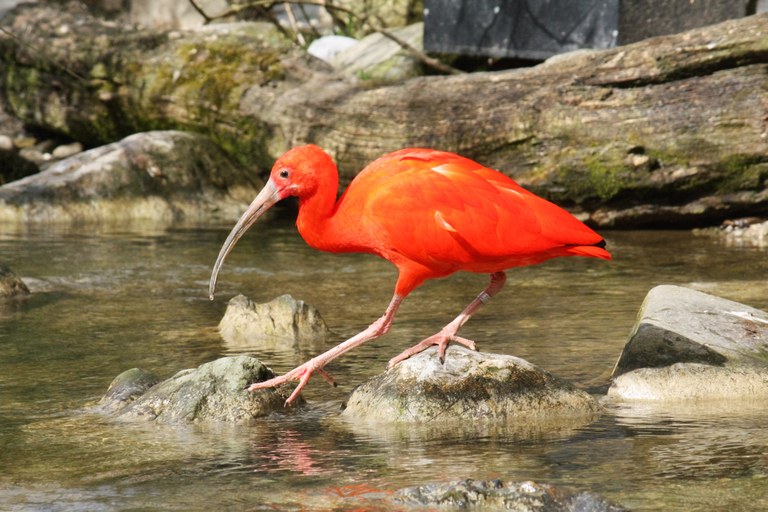 When Trinidad and Tobago declared its independence from Britain in 1962, the scarlet ibis (Eudocimus ruber) was designated one of the island country’s two national birds. Representing Trinidad, the larger of the nation’s two main islands, the scarlet ibis was declared off-limits to hunting after having been targeted in the past for its meat and brilliant red feathers, used to adorn costumes for the islands’ annual carnival.

The bird has become popular both as symbol and live attraction. Like the other national bird—the Roufous-vented chachalaca, or cocrico (Ortalis ruficauda), which represents Tobago—the scarlet ibis occupies a place on the country’s coat of arms. It also is pictured on the front of Trinidad and Tobago’s one-dollar bill (TTD$1), and is a tourism draw at its principal breeding ground—the Caroni Swamp, the internationally recognized, 6,000-hectare (14,800-acre) wetland located 16 kilometers (10 miles) from Port of Spain, on Trinidad. There, a tour-boat highlight is the sight of hundreds of scarlet ibises swooping into the wetlands at dusk, their red coloring contrasting with the green of the mangroves.

Fame, not protection
Despite its prominence, however, the scarlet ibis has been hunted by poachers—at a growing rate, some experts say. The problem has drawn particular scrutiny since coverage last year of a case of illegal scarlet-ibis hunting in the Caroni Swamp. On July 26, the government’s placed the bird on its list of environmentally sensitive species. As a result of that action, poaching of scarlet ibises is now punishable by up to two years in prison and TTD$100,000 (US$15,000). That compares to a maximum penalty previously of TTD$1,000 (US$150).

“It is not just killing the Scarlet Ibis that will attract the fine, but, if you just interfere with the bird or are found in possession of the carcass of the bird in its entirety or any part thereof, the cost could be unaffordable,” Clarence Rambharat, Trinidad and Tobago’s minister of agriculture, land and fisheries, said during a ceremony held July 26 at the Caroni Swamp Visitors’ Centre to mark the new designation. “For instance, if you have five feathers in your possession, then that will incur a TTD$500,000 fine.”

It was Rambharat who, in Aug. 2017, initiated the process to place the scarlet ibis on the environmentally sensitive species list. He did so after three men were found in Caroni Swamp with scarlet ibis body parts in their motorboat. The incident sparked outrage after Rambharat posted photos of the feathers and remains on his Facebook page, but given the penalties in force at the time the three men only could be fined TT$1,000 (US$150). “Poachers are so dismissive of the current fine,” Nadra Nathai-Gyan, chairwoman of the country’s Environmental Management Authority (EMA), said at the time. “They take it as a big joke.”

The scarlet ibises’ value is not only environmental, but also economic, given that they have helped make Caroni Swamp among the country’s top tourist destinations. That is no small matter for people like Allister Nanan, whose family-owned business, Caroni Bird Sanctuary Tours, pilots hundreds of tourists a day through the wetlands.

Recognizing nature’s appeal
Nanan’s grandfather Simon was a sugar plantation worker who in the 1930s would visit the swamp to hunt and fish. By the 1950s he and his son Winston, Nanan’s father, saw the potential for what would later be known as ecotourism and began giving boat tours. Later, Winston became an ornithologist who guided bird-watching expeditions in Trinidad and Tobago and other countries of the Caribbean and South America.

He points out that the strengthening of the scarlet ibis’s protection status required persistent lobbying—and will need tight enforcement to have an effect. “Though the scarlet ibis has been protected since being chosen in 1962 to be the National Bird of Trinidad, it was still being hunted,” Nanan says. “On numerous occasions we met with successive officials to encourage regular patrols to deter poachers from hunting the ibis. So we are pleased with this decision, but what is needed is patrols every day in the swamp.”

The scarlet ibis is now the 11th animal to be placed on the Trinidad and Tobago’s environmentally sensitive species list. Of the other ten, five are different types of sea turtles, many of which feed in the country’s coastal waters and nest on its shores. Nadia Nanan, senior environmental-education officer at the Environmental Management Authority (and no relation to Allister Nanan), says it is unclear how great a toll poaching has taken on scarlet ibis numbers, adding the new status is nonetheless welcome. “I don’t think the poaching is related to the need for an income,” she says. “There seems to be a myth that [scarlet ibis meat] is an aphrodisiac, and some people like to say they serve scarlet ibis at their party,” she says. “There’s more research to be done to determine whether the population has in fact declined significantly, but [listing the bird as environmentally sensitive] is an important step”.