It was supposed to be a sunny day in the summer of 2013, but Sompong Pannoi recalled that a storm abruptly hit the coast of Prachuab Khiri Khan’s Khan Kradai Bay and damaged over 30 boats.

“It doesn’t seem to be the sea we used to know,” said the 41-year-old fisherman who usually fishes no further than 20km from shore.

Like most fishermen, Mr Sompong knew little about climate change. But in the last five years, they have noticed changes in the sea and weather patterns that have affected their livelihoods.

Irregularities have been witnessed. Exotic marine life has been found in some coastal areas, believed to have come with the change in currents.

The unusually extreme weather, stronger winds and irregular rainfall, sometimes force fishermen to sail further out to sea for the same amount of fish they used to catch.

According to the Department of Fisheries, the export value of coastal fisheries has doubled in the last 20 years but fish catch volumes dropped last year by almost half to about 1.6 million tonnes, valued at 56 billion baht.

For years, overfishing has been solely blamed for the decreasing amount of marine life.

But academics warned climate change should also be taken into account and locals, especially fisherman, should be prepared for the change.

Arpa Wangkiat, a lecturer at Rangsit University’s Department of Environmental Engineering, has tracked climate change, and says people in general may be aware of climate change but haven't yet taken action to adapt.

More than 56,000 households, 90% of whom are fishermen, depend exclusively on fisheries, according to the National Statistical Office.

According to the Thailand Research Fund, data collected across the country has found the temperature between 1955 and 2009 increased by 0.96 degrees Celsius.

“Fishermen will be the most vulnerable group,” said Ms Arpa, as many depend purely on natural marine resources, without other alternatives.

But few of them, or the authorities, are aware of the severe consequences brought about by climate problems, said Ms Arpa. Educating people to be aware of climate change and to be ready to adapt to it is a priority.

According to the Intergovernmental Panel on Climate Change’s "Climate Change 2014: Impacts, Adaptation and Vulnerability'' report, the warmer sea should increase fish catch volumes by up to 70% in high latitude regions but lead to a 60% drop in the tropics and Antarctica.

This highlights the vulnerability of economies in tropical coastal countries.

Sitting in a tropical sea, Thailand’s economy is driven partly by exports of fishery products, which held a 1.4% share of gross domestic product in 2014.

Ms Arpa cites the 2013 Rayong oil spill — 50,000 litres leaked during a transfer by PTTGC — to show that fishermen need alternate options for their livelihoods.

The spill was blamed for causing long-term ecological damage and despite PTTGC’s clean-up operation, hundreds of fishermen were affected by the contaminated sea.

Only some of them managed to survive after the spill as they had alternative jobs while a large number failed, said the lecturer.

Thon Thamrongnawasawat, an academic at Kasetsart University’s Faculty of Fisheries, said much analysis of climate change focuses on the economic aspects, for example, how to cut greenhouse gas emissions in the business sector.

“But educating people to be ready to adapt to the climate change crisis is just as important,” he said.

He has monitored the sea and is concerned about a possible repeat of coral bleaching next year as El Nino steps up.

In 2010, the fisheries sector was shaken by warmer sea temperatures that caused 70% of coral in the Andaman Sea to bleach. Large marine habitats, which provide food security, were severely damaged.

According to the Department of Marine and Coastal Resources, sea temperatures rose from 29°C to 30°C just three weeks before the coral bleaching.

The National Oceanic and Atmospheric Administration reported that El Nino — large-scale ocean-atmospheric climate interactions, which are linked to periodic warming of sea surface temperatures across the Pacific ocean — hit Southeast Asia this year, causing extreme droughts and unusual rainfall patterns. It is likely to continue until next year.

“The impact of climate change is manifest, and it’s severe. We tried not to link it with climate change, but it actually is,” he said.

On the other side of the development rush, at the heart of a proposed site for the Pak Bara deep seaport in Pak Nam, an ambitious state project to create an international logistics and trade hub, Sanan Machcha, 66, a local fish pier operator and a local Muslim religious leader, has also noticed a change in the sea.

Observing the sea for more than 40 years since he started his business, he says fish catches have plummeted. The sea is warmer, he said, with widespread use of destructive fishing vessels.

While scientific methodology clarifies winds in only two directions, southwest and northeast, fishermen know there are 12 wind passages which have been passed down through unwritten lore.

Beyond the 12 wind passages that Pak Nam fishermen are acquainted with, there is another they have yet to hear much about — the 13th wind passage, called "Ta-Ngala".

Local folklore says it’s likely to come from the northwest while combining with all 12 wind passages at once — a kind of extreme wind that will end the world.

“God gives us an abundant sea so the grassroots people can sustain their lives,” said Mr Sanan.

“The end of the world might come. But his mercy will remain if we care for the earth.” 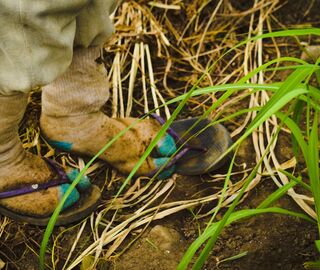