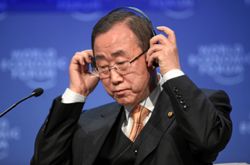 The Secretary-General of the UN Ban Ki-Moon called for “revolutionary action” from global heads-of-state and industries on climate change. Former chief negotiator for the UN climate change talks, Yvo de Boer, tells host Bruce Gellerman about the UN’s new emphasis on sustainable development, and America’s role in it.

GELLERMAN: From the Jennifer and Ted Stanley Studios in Somerville Mass, this is Living on Earth. I’m Bruce Gellerman. Despite 20 years of UN led negotiations, global greenhouse gas emissions continue to increase, and a new international climate treaty seems a distant hope. Now the Guardian newspaper in Britain reports that UN Secretary General Ban Ki-Moon appears to be ending his day-to-day involvement with the climate talks. But he’s not going quietly.

Ordinarily the UN Secretary is a soft-spoken, genteel diplomat, but at the recent World Economic Forum in Davos, Switzerland he was outspoken about climate change, inaction and the fate of the planet:

BAN KI-MOON: Climate change is showing us that the old model is more than obsolete. Over time that model is a recipe for national disaster - it is a global suicide pact. It may be strange to speak of revolution but that is what we need at this time.

GELLERMAN: Joining Ban Ki-Moon at the Davos summit was Yvo de Boer – until last year he was the UN’s top climate negotiator. Mr. De Boer, welcome to Living on Earth.

de BOER: Very strong, but I think that he’s right, that it is a fundamental transformation that we need to be looking at. The global economy is emerging from an economic crisis, and that we’re aware that we’re at a fork in the road. Do we take the brown route and rely heavily on coal, on other fossil fuels, or do we really make the shift to renewables?

GELLERMAN: The UN Secretary General recently made an announcement that signals a dramatic shift. He’s stepping away from the climate negotiations.

de BOER: Well, people have said on his behalf that he’s not going to be dealing with day-to-day climate change negotiations and he wasn’t actually doing that in the past. He was very much focused on getting heads of state and government engaged in the process, making sure that we have the political leadership focused on this topic, and I think that’s where he will continue to exert his influence - I certainly hope so.

GELLERMAN: So you don’t think he’s putting his hopes for an international agreement on climate change on the back burner?

GELLERMAN: Sustainable development, and he also uses the words ‘clean energy.’ I noticed that in his State of the Union Address, President Obama didn’t mention climate change - he talks a lot about clean energy.

de BOER: Well, the President in his State of the Union Address, it’s true, did not talk about climate change, but he did talk about putting an end to fossil fuel subsidies, to creating green jobs, to stimulating a technological revolution in this country. I think that American presidents as far back as Nixon have been talking about ending an addiction to oil, and maybe it’s time somebody did something about it.

And so, although President Obama didn’t use the words ‘climate change’ I think his agenda in terms of innovation, green jobs, renewable energy and putting an end to subsidies for coal and oil is basically the same thing but using different words- hopefully more popular ones.

GELLERMAN: While you were in Davos, you met with some of the world’s business leaders - and you have over the years - do you have any sense that the people involved in fossil fuel industry are going to step away from the old, or what Mr. Ban Ki Moon calls – the 'obsolete' model?

de BOER: No, they’re not going to step away from that. But to repeat an often made and not very good joke - the Stone Age didn’t end because the stones were finished - it ended because we found something better. And in the same way, we need to transition now to modern energy sources.

Now, that is going to hurt for people in the oil and gas business - and coal - unless we manage to transition that revolution effectively, and that’s all about helping oil and coal industries transform themselves into energy companies that branch out into new areas and into new technologies.

GELLERMAN: Can technology save us?

de BOER: Technology will have to save us, at the end of the day. If we are moving towards a global population of nine billion people that want a decent lifestyle, and we recognize that we can’t give them a decent lifestyle if we continue to rely on the technology today, then we either have to fundamentally shift the technologies that we deploy in a much cleaner direction, or basically sentence billions of people to continued poverty.

GELLERMAN: But can we do that without firm emission targets? Because here in the United States, as you know, firm emissions targets are dead on arrival!

de BOER: Well, firm emission targets are dead on arrival at the federal level. At the same time, I see a lot of states in the country advancing on targets and on emissions trading as well. If all of the states that are talking about emission trading at the moment go ahead with those plans, then close to a quarter of the US economy would actually be under a cap and trade regime.

de BOER: Well, I try to be optimistic. I’m frustrated as well. It was a great disappointment, for me, to see that the climate and energy legislation did not make it at the federal level - that President Obama is now having to take a different tack. But at the same time, we are in the situation that all 42 industrialized countries have all set themselves targets for the year 2020 - that 40 developing countries, including two of the big ones, including China and India, have set themselves national targets to limit the growth of their emissions. And those countries count for close to 90 percent of global CO2 emissions. So, in that sense, the train has left the station, unfortunately, it’s moving rather slowly.

GELLERMAN: Can that revolution happen without the United States or will they leave us at the station?

de BOER: The United States has a centuries long history of being a leader in innovation and change and in dynamism. But China is now a world leader in wind and solar technology. And I think that that is for broader economic reasons. And I think that, yes, at the end of the day we could probably do it without the United States, but it would be a great pity to see such a fantastic innovator be left behind.

GELLERMAN: Well Mr. DeBoer I want to thank you again. It’s always so good to talk with you.

de BOER: Very nice to speak with you again. Thank you.

GELLERMAN: Yvo de Boer is a global advisor on climate change and sustainability with KPMG. 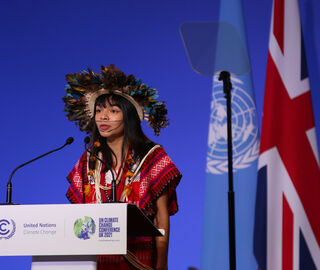