The calm coastal line at Kakdwip fishing harbour in the eastern Indian state of West Bengal, defies the ferocity of the sea it limits. It also defies the anguish of Drubadi Das, who lost her husband to a sea storm. 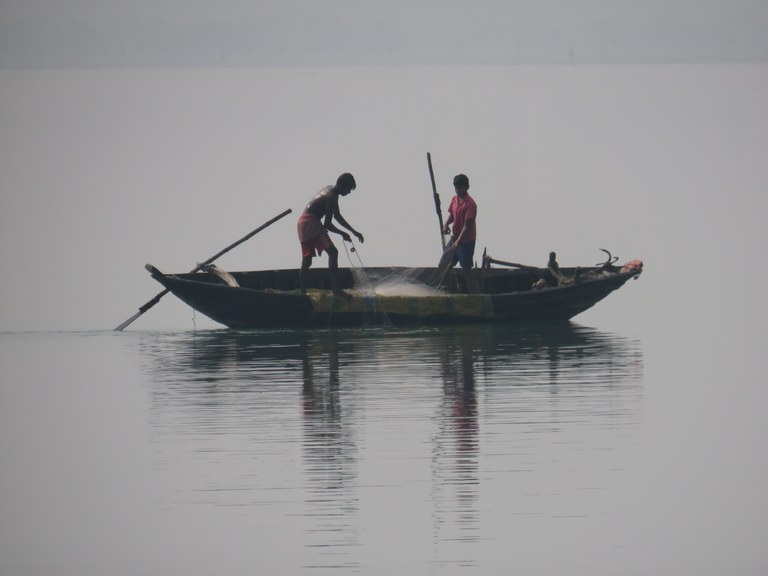 A year back, the trawler in which Das’s husband had gone out fishing in the Bay of Bengal along with 10 other fishermen tumbled when it was struck by cyclonic winds. The fishermen got entangled in their own fishing nets in the rough waters and drowned.

There is no comparable data available for the total number of fishermen deaths in the previous decades. But the increasing threats placed on fishermen’s lives and livelihoods by the impacts of climate change and overexploitation of marine resources is evident as seas get wilder and fish stocks fall.

Fishing around the Indian Sundarbans is far riskier and less lucrative than what it was a decade back, said Satinath Patra, secretary of the Kakdwip Fishermen's Association.

Mukund Maity, a fisherman at Kakdwip, said fishermen go out to sea more often now, despite the risks.

“Earlier, 20 long trips during the season would be enough to survive for the whole year,” he said. “But now, the average number of trips has to be not less than 30 to 35.”

Riskier by the day

Numerous rivers, estuaries, tidal creeks, mudflats and inlets formed out of a fanlike riverine system feed into the Bay of Bengal in eastern India.

With rising sea temperatures, the severity of storms in the Bay has increased over the past decade, say scientists.

“Due to global warming, the ocean property is changing. The sub-surface water temperature is more than the surface water, leading to more conservation of energy and the ability of the sea to form severe cyclones,” said Prasad Kumar Bhaskaran, head of Ocean Engineering and Naval Architecture at the Indian Institute of Technology in Kharagpur.

A study on the increasing intensity of cyclones in the Bay of Bengal by a team of researchers at the Atmospheric Sciences and Global Change Institute at Pacific Northwest National Laboratory in the U.S. state of Washington, found that the intensity of storms went from an average classification of Category 3 between 1981-1995 to Category 4 for the 1996-2010 period.

Meanwhile, as the intensity of sea waves has increased, so has their ability to erode and carry suspended sediments, according to Bhaskaran. More evaporation, caused by warming water temperatures, is also leading to higher siltation along fishing routes, especially in creeks leading to the sea.

There are about seven major rivers running through the Sundarbans region of West Bengal. Of those, siltation is particularly high in rivers in the eastern sector, where five rivers have lost their upstream connections with the Ganges due to a combination of heavy siltation and solid waste disposal from the adjacent cities and towns, according to research by Abhijit Mitra, a professor at the department of marine science at the University of Calcutta.

“A large number of accidents take place at Channel Creek, a popular fishing route, which has become high in silt content,” Mitra said.

The Kolkata Port Trust recently invited bids for dredging the Channel Creek site, a narrow distributary of the Hooghly River before it meets the sea. The project, expected to begin this year, will last for about eight years and cost an estimated Rs 1,200 million (about $17 million ), according to a government document. 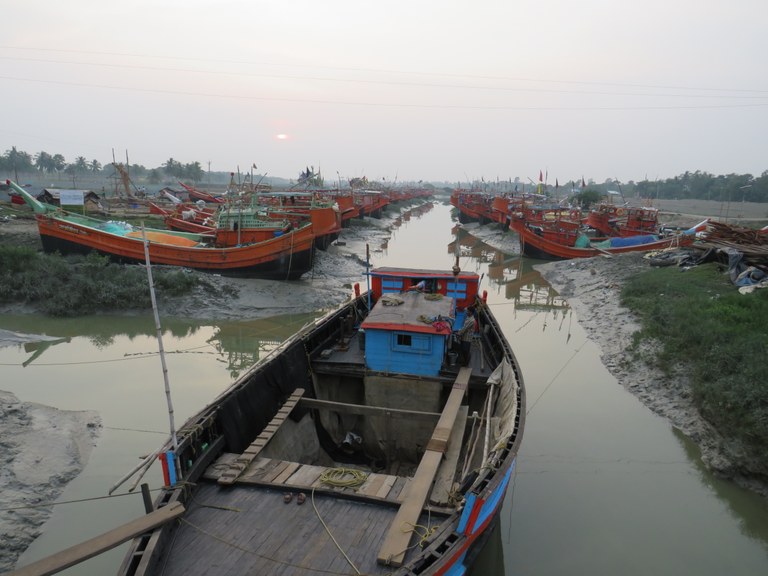 Another way to mitigate accidents is through improved weather prediction tools. In June 2018, for example, a new technology, called Ensemble Prediction Systems (EPS) was launched in India.  The model is capable of providing highly localized weather predictions—nearly halving the area the earlier system covered.

Yet many fishermen continue to use outdated communications equipment, limiting their ability to call for help when needed.

While fishing trawlers are equipped with specialized wireless phones, the reach of most is limited to around 50 km from the coast.

“By the time fishermen unions get weather alerts, our fellow people are already out of our reach. Sometimes the reach of the wireless equipment sets is as less as 10 to 15 km. We have made several representations to the government for up gradation of the equipment,” said Patra.

The state recently allowed fisherman to use satellite phones, which have a much longer reach. But each phone costs about Rs 100 thousand (US$1,400). The fishermen’s association is now seeking to procure the phones at subsidized rates.

Even if fishermen receive weather warnings, however, they often ignore them, said, GK Das, director of the Regional Meteorological Centre (RMC) at Kolkata.

Weather reports have been sent to government departments and fishermen’s associations through WhatsApp up to five days in advance over the last three to four years, Das said. “The fishermen raise alarm over the storm only when it is close to landfall.”

Chandranath Sinha, fishery minister for West Bengal, said many deaths last year were on account of carelessness. “First, they ignore weather warnings. Secondly, there are panic buttons installed in trawlers but the fisherman are often not bothered to check its functionality,” he said.

According to fisherman, the weather warnings are mostly redundant and don’t provide the information needed to allow them to operate within reason.

“Every year, we get 70-80 warnings about bad weather. If we adhere to each, fisherman will not be able to go for fishing at all,” said Patra. “What we need is a specific warning about pattern of waves and wind directions.”

Still, he agrees that there is little awareness about the use of panic buttons, and his association has been holding several workshops to help the members understand their utility better.

While increasingly extreme weather puts fishermen’s lives at risk, declining fish stocks have made fishing a difficult profession, driving fishermen to take more risks, such as going further out to sea, and many times despite bad weather warnings.

West Bengal bans fishing each year between 1 April and 14 June. The ban is aimed at both conserving marine ecology (as it is time when fish eggs hatch) and protecting the lives of fishermen during the turbulent monsoon season. Yet at least 10 fishermen died in West Bengal in 2018 after flouting the ban and heading to sea.

After the ban period, fishing activity is at its peak from June until October. From November onwards, as the number of fish in the sea starts to deplete, fishing activities slow down as well. 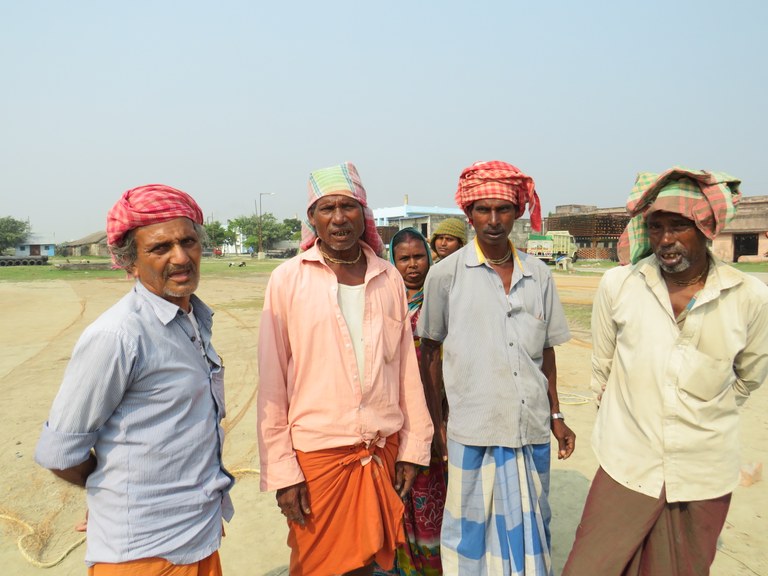 In some years the depletion is acute, like this season, when almost 80 per cent of trawlers at Kakdwip Port have not operated since December 2018, said Bijon Maity, secretary of the West Bengal United Fishermen Association.

“Seasonal variation could be a factor behind the fall, but we can clearly now see a pattern. About four to five years back, in present weather conditions, we used to get up to 10 trawlers of fish like Black Pomplet,” said Patra. “This year, we are getting not more than two to three trawlers of the fish. Due to overfishing, the sea bed is getting destroyed and several planktons, which are a source of food for marine creatures, are getting washed away.”

Meanwhile, with the rising cost of fuel, the cost of fishing has almost doubled in the last five years. Patra says the average cost per trip to the sea in a big trawler is about Rs 80,000, while the average catch from a trip has not been worth more than Rs 30,000 in the last two months.

Yet for most people in Kakdwip, there is no alternative to fishing.

“In absence of any other earning avenue, despite all the risks involved in fishing, I am forced to go for fishing,” said Madan Das, a fisherman. “Many young people have migrated to Kerala as construction workers, but for people like us who have elderly parents at home, it is not possible to migrate.”

Close to 200,000 people in Kakdwip are directly or indirectly dependent on fishing, according to a government official. And the number of artisanal fishing boats and trawlers keeps rising.

More than 11,500 licensed fishing vessels, including small boats and about 4,000 trawlers, are operating in West Bengal’s South 24 Parganas district, where Kakdwip is located and the bulk of the state’s fishing trade takes place. The number of fishing vessels has increased by more than 2,000 in the last two years, according to government data.

In 2018, after several fishermen’s unions raised concerns that overfishing was depleting fish stocks, the West Bengal government stopped issuing new licenses for fishing trawlers in the district. Requests for about 300 new licenses for trawlers are on hold with the government, according to a senior official.

While young people prefer migrating, for older people like Nakul Das, well past the retirement age of 60, there is no respite from hard labour.  He earns about Rs 250 by weaving fishing nets for seven hours. Nakul Das lost his son in a fishing accident few years ago.

“Fishing and hardships are synonyms, no matter the age,” Das said.

A version of this story originally appeared in the Business Standard in India on Jan. 12. It was produced with the support of the Earth Journalism Network's Bay of Bengal Climate Justice Resiliency Initiative.