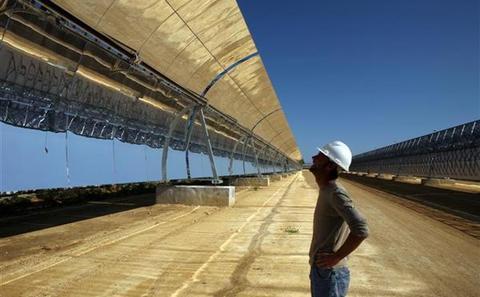 A worker inspects panels at a solar power plant, a sector that is likely to be one of the main winners from President Obama's curbs on coal-fired power stations. (Image by Greenpeacedata-entity-type="file" data-entity-uuid="a5ffb1bc-e95f-46d1-8b90-833f9339f74b" Markel Redondo)

The US Clean Power Plan announced this week, described as the centrepiece of the country’s climate policy, for the first time puts strict limits on carbon dioxide emissions from the electricity generation sector and will decisively shift the power industry away from coal.

Emissions from the power sector are the largest source of US greenhouse gas (GHG) emissions, and until the Clean Power Plan weren’t controlled at the federal level.

Under the plan, those emissions will be reduced 32% by 2030 from 2005 levels, up from 30% proposed in an earlier draft. A 32% reduction translates into 870 million metric tonnes of carbon dioxide equivalent and is a major contribution to the broader commitment that President Obama made in the US national climate plan submitted to the UN’s climate arm in April.

That broader plan, which all countries at UN climate talks have to submit and is known formally as Intended Nationally Determined Contribution (INDC), pledges to cut overall emissions in the US 26-28% by 2025 and deliver reductions of 6 billion tonnes of carbon dioxide equivalent by 2030.

Many individual states and some regional initiatives have been reducing emissions as explicit climate policy, and some have measures to promote renewable energy or efficiency. But now, every state will have a climate-specific target and plan to get there. This structure and use of a market-based approach may be one of the largest accomplishments of this plan.

The administration’s shift to a 32% target is seen as aggressive action that takes advantage of the shift towards low-cost renewables in the states. Very few targets such as this get stronger as they go through the process and become final. That's because industry lobbies and regional political interests usually manage to wring major concessions from the executive on legislation as sweeping and divisive as the Clean Power Plan.

Many states, Republican congressional leaders, and powerful opponents principally in the coal sector, have vowed to block the president’s agenda in Congress, in the courts and in the states.

While the final version has been crafted to accommodate concerns of industry and individual states, the plan remains stringent, as do targets for emissions reductions.

States have more flexibility around the timeline under which they phase in reductions than in the draft rule that was released last year, and have also been given greater incentives to rely on efficiency and renewable energy as they shift away from coal and minimise use of natural gas.

In part, these changes reflect an effort to both accommodate the feedback and concerns of states and the utility sector, but many observers also believe that these changes will make the plan harder to stop in the courts.

The inevitable attacks from opponents are widely seen as unlikely to succeed. States such as Ohio and Nevada may likely give support to lawsuits that object to the plan, but are still likely to move ahead with crafting their own approach to implementing the federal executive's targets for the power sector.

Even as the plan was in its drafting stages, as many as 41 states were in the process of considering their strategies for meeting their targets. Similarly, the utility sector is moving ahead with coal plant retirements and investments in low-carbon or renewable energy under the assumption that the plan will be the dominant architecture for carbon limits in the near future.

Berkshire Hathaway Energy, a major utility group covering several US regions, recently took part in a White House conference where US businesses worth US$2.5 trillion (15.5 trillion yuan) committed to support the UN climate process and committed at least US$140 billion towards investments in low-carbon technologies.

Some in the environmental community say the targets to reduce carbon emissions could have been stronger, adding that many of the policies of the Obama administration elsewhere have undercut the country's commitment to climate policies.

These include coal and natural gas exports, Arctic drilling, and the low-cost and easy access to fossil fuel development on public lands. But even if different groups believe the measures being taken by the Obama administration are a glass half empty or half full, there is no question that financial markets are beginning to favour cleaner sources of energy than coal.

Even before the Clean Power Plan rules appeared, a wave of bankruptcies and plummeting company values had crippled the coal industry. Peabody Energy, the largest US coal company, has ceased dividends for shareholders and seen its share price shrink to just over US$1 a share from US$72 a share in 2011.

There are still many turns in the road for the Clean Power Plan, but the path to a low-carbon economy has truly begun in the US and President Obama is aggressively using his final months in office to test the limits of what can be accomplished before his term ends.

Honduras
Honduras on alert against new disease that exterminates corals