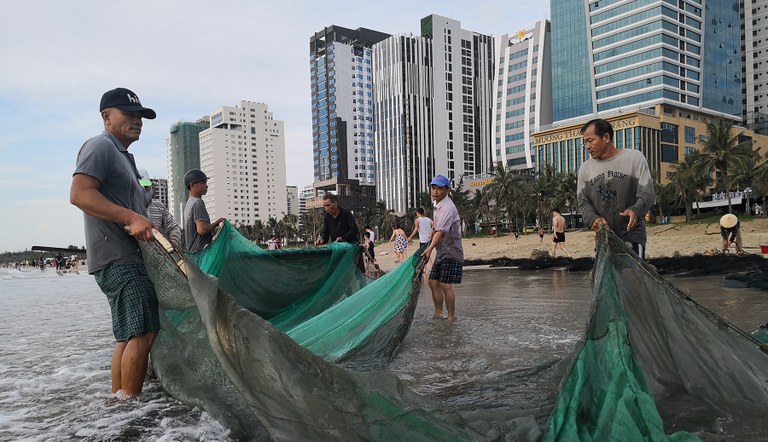 Local fishermen pull their fishing nets out of the water in the morning on a beach in Da Nang, Vietnam. (Photo by Paritta Wangkiat)

Scenes of visitors crowding around a dozen local fishermen on a beach to watch them pull their fishing nets out of the water may sound strange but it has become a daily ritual in the tourist-magnet city of Danang, Vietnam, as I found out during a recent trip there.

With the rapid boom in tourism, the morning fishing routine has been transcended into something of a public event, regularly drawing crowds who gather to take pictures and make video clips of it.

And as soon as the nets are hauled, the crowd melts away. The tourists didn't seem very interested in the small baskets of tiny fish. In fact, the catches were so small that one person there told me they were dwarfed by the size of the collective catches in earlier times.

Danang's booming tourism has become an integral part of local livelihoods. The city was once a quiet cluster of fishing villages. As of now, local fishermen can still survive the rapid changes in their hometown, which is seeing the rise of luxury hotels and other real estate, along with the arrival of more developers and investors. It's not a matter of if but when they will no longer be able to make a living from traditional fishing.

Now the beach is filled with tourists each morning swimming and splashing around right next to the fishing nets, highlighting the threat that tourism can pose to traditional ways of life and people's livelihoods. This has stirred debate about the excessive exploitation of natural resources as Vietnam continues to experience rapid development.

Last year, tourism contributed 7.5% of GDP and comprised some 2.5 million jobs. However, the sector also offers enormous benefits to local people. There are many success stories showcasing how the industry has helped lift local communities out of poverty.

But there is a flip side to this in how tourists can also have a negative impact on the lives of local Vietnamese. For example, the rising number of international visitors to Sapa, an ethnically diverse town in northern Vietnam, has attracted investors to build new hotels and facilities on its green-terrace rice fields.

But ethnic minorities in Sapa have not reaped much benefit from the growing revenue generated by the -- still poorly regulated -- tourism industry; rather, they settle for low-paid jobs on construction sites and other menial work. Instead of seeing the gains, they have to endure more traffic congestion and worse air pollution.

The adverse affects of the recent tourism boom have been witnessed across the country.

Plastic waste off the coast has become a huge problem in Ha Long Bay in the north while the beaches of Phu Quoc in the south are mainly occupied by holiday resorts. The island has been designated as one of the government's three coastal special economic zones (SEZs) to drive the country's growth. Such a policy will attract investors while loosening law enforcement and potentially allowing foreigners to lease land for up to 99 years.

Phu Quoc will likely become a hot spot for investors once the policy is implemented. The island's future will then be left in the hands of developers.

The government is drafting a law to facilitate investment in the SEZs. Two weeks ago, rarely seen street protests surfaced in opposition to a bill related to the prospect of allowing 99-year land leases, as patriotic Vietnamese made their concerns felt that such a law would mainly benefit Chinese investors.

This week, the issue of sustainable tourism was discussed at the sixth Global Environment Facility in Danang, at a five-star hotel next to a stretch of beach. The assembly brought together representatives of international institutes, the private sector and civil society organisations to discuss the world's environmental problems and address the urgent need for a "transformative economy for sustainability". It is also a venue for those from developing countries and nations with transitioning economies to pitch their sustainable environmental projects in a bid to attract funding from the GEF's US$4.1-billion trust fund, which is fed by donors and administered by the World Bank.

Tran Hong Ha, Vietnam's minister of natural resources and environment, spoke on the sidelines of the event, saying the Vietnamese government is aware of the long-term benefits of sustainable tourism and preserving its biodiversity. However, he added that it is also aware of many challenges that lie ahead, such as ineffective law enforcement.

The government has revised or introduced many laws, regulations and strategies to cater for this rapid development and Vietnam's goal of sustainability. But conflicts of interest involving the political class have triggered cases of law evasion. Well-connected businesses have competed to reap the benefits of this development of natural resources on a first-come, first-served basis.

"Law is necessary but it's not efficient to change the reality," said Jake Brunner of the International Union for Conservation of Nature (IUCN).

Take the development strategy of Danang as an example. The government and local authorities have been talking about turning the city into a centre for information technology and high-tech industries, a hub for start-ups, a destination for international conferences and a model for low-carbon cities.

The city serves as the eastern gateway of the Greater Mekong Subregion's (GMS) East-West corridor, one of five economic corridor initiatives that link the GMS with India's Ganges River economy. The corridor aims to build economic and infrastructure connectivity to distribute prosperity among GMS countries.

Despite the bright prospects highlighted by the strategy, Danang has experienced a development dilemma. Local residents are left to deal with air pollution and excessive waste generated by more than 6 million visitors a year. In 2016, masses of fish were killed by a steel plant's toxic waste along Danang's coast and other parts of the country, according to reports.

Amid these environmental concerns, a foreign property developer is apparently mulling building an artificial island, like Dubai's Palm Islands, to boost tourism.

But as big business gains, local people lose. Many have been forced to change their way of life only to see local resources tapped by developers. Despite a growing trend of community-based tourism in Vietnam, the tourism boom has instead promoted an exclusive economy whose benefits are not fairly distributed.

Vietnam's tourism industry should promote an inclusive economy by engaging local people, recognising their ownership over natural resources, and giving them their due.