A remote community in Papua New Guinea has embarked on a mangrove-replanting programme to replace the degraded parts of their environment.

Residents of the coastal community of Poukama in the Kairuku-Hiri district of Central Papua New Guinea have taken upon themselves to champion mangrove rehabilitation using their available resources and, importantly, existing traditions to protect their biodiversity.

What makes the effort even more interesting is a major discovery uncovered by research from the local non-profit group Papua New Guinea Center for Locally Managed Areas (PNGCLMA).

Through the mangrove replanting project, PNGCLMA engaged Dr. Lawong Balun from the University of Papua New Guinea to lead a biological survey from September 2017 to February 2019. The survey found that the Hallsound Bay mangrove area, which covers over 37,400 hectares, is home to 72 mangrove species, making it the largest and most diverse mangrove forest in Papua New Guinea, according to PNGCLMA.

Maxine Anjiga, executive director of PNGCLMA, says her organisation works through the Locally-Managed Marine Areas approach, which means local people take the lead in managing their marine resources in partnership with other agencies, whether business or government from all levels.

“Communities use traditional know-how to manage resources but then they need science to confirm certain assumptions, thus we engaged Dr. Lawong Balun, from the University of PNG to do a study to determine the health of the mangrove ecosystem,” Anjiga said.

With this information in hand, the women of Poukama drew support from their village chief and the community at large and embarked on a significant drive to preserve their mangrove forests.

Preservation is important, according to the United Nations Environment Programme, because, “Although mangroves make up less than one per cent of all tropical forests worldwide, they are highly valuable ecosystems, providing an array of essential goods and services which contribute significantly to the livelihoods, well-being and security of coastal communities.”

The women in Poukama are working to ensure the project is sustainable by using what is readily available to them and formally organising themselves, establishing the Women in Mangrove Management, or WIMA.

Poukama’s WIMA vice chairlady and spokesperson, Marie Helen Mamei says prior to being introduced to the topic of environment and biodiversity conservation, they were engaged in what she views as an unsustainable way of harvesting resources from their mangrove forest.

They were cutting down mangroves unnecessarily without realising that they were destroying them, she says. But now that they are fully aware of the importance of this resource, they are putting all their efforts into ensuring that they replace what they have cut down.

According to Mamei, the 25-member women’s group meets once every fortnight for a half day general clean up and planting of mangrove seedlings from their nursery.

She says money is not a motivation for them; it is their desire to ensure they leave behind a healthy mangrove forest for their children so they can harvest resources from it for their daily sustenance.

“We have PNGCLMA at our back who always supports us with training on how to look after our marine resources and environment," says Mamei.

“We started this project in 2014, and I am happy to say that since that time up till now we’ve planted over 3,000 mangroves in our mangrove rehabilitation area," she notes. “We do this voluntarily with the help of our husbands and children. We want this to continue because we know that in the future it will benefit our children and the future to come."

Mamei also says they are fully aware of the importance of biodiversity and conservation, something they knew little about a few years back.

“In the past when we did not have this rehabilitation area there were not many fish, crabs and shells, but now with this project we see a lot of this marine organisms in the mangrove.”

Like Mamei, WIMA chairlady Elizabeth Vagi acknowledges the importance of the mangrove forest to their daily sustenance. However, she is worried that young women in the community do not seem to take an interest in their mangrove rehabilitation programme.

“We have to continue planting so we need to encourage the younger generation, especially the girls to join us in this project. We won’t be here forever, so when our time is up they can be able to follow in our footsteps and continue with the project,” Vagi said.

New threat on the horizon

Future conservation aspirations for Poukama have recently come under threat from plans to build a wharf several meters away from the mangrove rehabilitation site. The proposed multi-million-kina fishing project is part of the provincial government’s plan to drive development agendas through the agriculture sector.

On May 11, 2020, local TV station EMTV quoted Governor Robert Agarobe announcing that plans and discussions were underway to invest in the free trade zone concept for the Kairuku area.

“The free trade zone would allow for more investors to invest in agriculture in the area and this would create employment and drive the provincial economy,” Agarobe said on EMTV news.

The chairman of the special management area, Francis Raoma, said the community feels threatened that its project, which has taken so many years to reach its current state is in limbo.

Mamei expressed concerns that there was little or no community engagement by the provincial government before the wharf project was proposed.

“We’ve worked for six years to plant these mangroves and if developments are introduced and it destroys what we’ve worked hard for in just a day, it will not be good for us. It will hurt us and it will be a waste of the hard work we’ve put into this mangrove project,” she said.

Mamei suggests that prior engagement and dialogue with resources owners and affected communities must be done if there are any plans for development in their area before the actual implementation of projects.

“The MP and governor are pushing for the project without proper consultation," said Raoma, who pointed out that while residents want some level of development, those in authority and developers must consult with the local community before they can proceed with any impact project in their area.

Despite hearing about the wharf project, Raoma said they are yet to see any meaningful consultation with village elders and members of the community.

“We feel threatened and our environment is threatened. What we’ve developed over a long time can be destroyed in a very short period of time and we don’t what that. It is good that they come and sit down with us so that we [can] discuss and analyze things to see that what they bring in is environment friendly."

The provincial government has remained tight-lipped about the wharf project, despite several attempts to get a response from the governor’s office. What also remains unclear at this stage is whether they have engaged a developer and how much it will cost to develop the wharf project.

A project owned by all

The head chief of Poukama village, Peter Aisi, said during a recent interview that the whole community now embraces the mangrove replanting project, but it wasn't always that way.

“It was a struggle in the beginning, but once the people understood the whole idea, they embraced it, even those who once opposed the project realised its importance and have now thrown their support behind it,” Chief Aisi said.

One significant achievement he highlighted is that everyone regardless of gender was able to work together to make the project a success.

The community still has a long way to go, he acknowledged, but they have made a positive start and he wants to see the project continue.

Chief Aisi also said that he and others of his generation made some decisions that have harmed their mangroves by harvesting them in an unsustainable manner, but he hopes that through this project they will be able to repair those mistakes for the future generation.

“Our time is already up, we have to do what is right now in order to create an environment that our future generation can enjoy," he said.

This story was first published in The National on 6 November 2020. This version has been edited for length and clarity. It was produced with support from Internews’ Earth Journalism Network (EJN).

Banner image: The Poukama mangrove rehabilitation project site. Research has found that Hallsound Bay, in which the project is located, holds the country's largest and most diverse mangrove ecosystem. 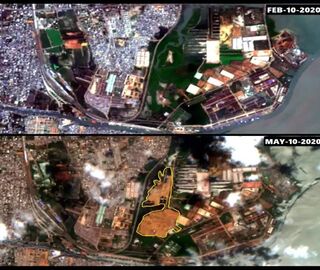 Philippines
Indigenous people spearhead the fight to save the planet
© 2021 Earth Journalism Network All rights reserved.