Two consecutive years of meagre rainfall in South Asia have led to rapidly depleting reservoirs. It has already impacted hydro and even thermal power production in India, latest data show. This can have a cascading effect on agriculture and drinking water supply if the reserves are not adequately replenished in this year’s monsoon. 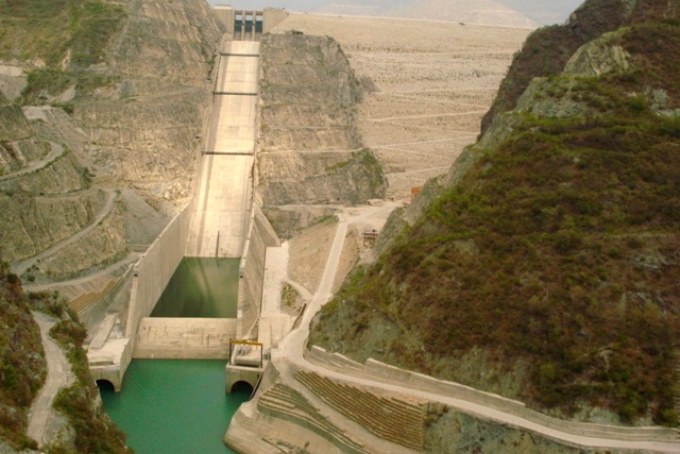 Abnormally low levels of water have brought down the energy content of Tehri dam to just 205 million units (MU) from the earlier 1,921 MU [image by Arvind Iyer]

The water available in India’s most important reservoirs now stands at merely 29% of total storage capacity of 45.8 billion cubic metres (BCM), the latest numbers released by the Central Water Commission revealed. Worryingly, it is less than the average storage in the corresponding period for the past 10 years and just 71% of the holding capacity when compared with the same period a year ago.

The commission monitors live water storage status of 91 big reservoirs that have a holding capacity of 150 BCM, which is 62% of the total storage capacity in India. Out of these, 37 reservoirs have the capacity of generating more than 60 MW of hydropower. The data released by the state-run agency is taken to be the proxy for the entire nation. 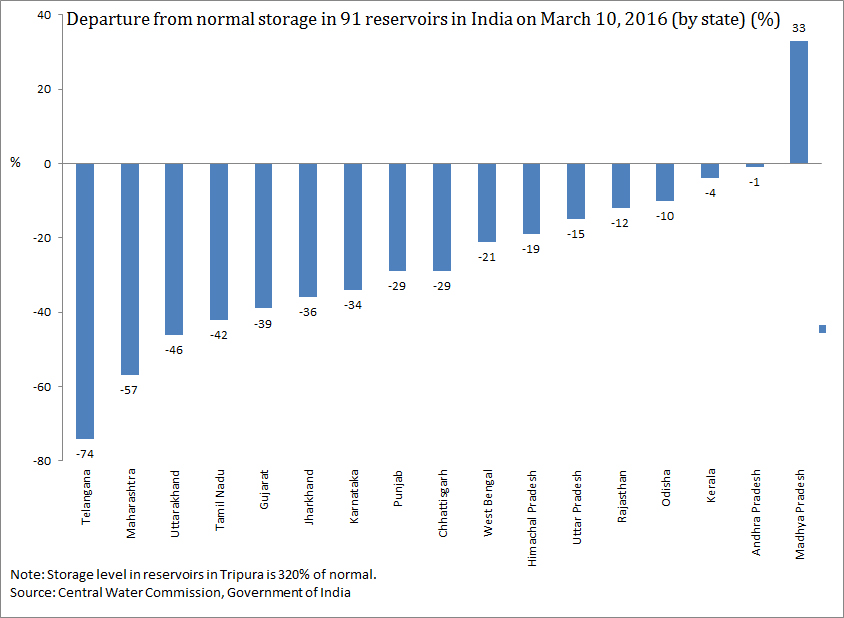 Such abnormally low levels of water have already affected electricity potential and generation, particularly at hydropower projects. For instance, at Tehri, the highest dam in India, the energy content stood at 205 million units (MU) on March 10 compared with 1,921 MU at full reservoir level, Central Electricity Authority data show. On March 10, 2015, the energy content was 386 MU in the dam on the Bhagirathi River in Uttarakhand in the Himalayas.

The situation is even worse in some other dams. The energy content at the Sardar Sarovar dam on the Narmada River, the country’s largest in central India, stood at 95 MU on March 10 against 1,818 at full reservoir level. It was 288 MU on the same date last year, according to India’s apex power agency. The lower year-on-year energy potential of the marquee hydropower dams is cause for serious concern.

This animation shows the level of water in India’s large reservoirs in 2015.

Hardly any water in Ganga

The effect of such low water levels across the country was dramatically driven home when NTPC, India’s largest power generation company, completely halted production at its 2,100 MW Farakka plant in the eastern state of West Bengal on Sunday. The availability of water from Farakka feeder canal from the Ganga River to the power plant declined so much that it forced switching off its 500 MW sixth unit, which was the only one that was still producing electricity.

Farakka is a coal-fired power plant. Water is used as feedstock in thermal power plants to produce steam that in turn spins turbines. It is also used as a coolant. The condition is so bad in Farakka that the power plant’s township is facing a drinking water crisis.

Residents of Farakka said even the main channel of the Ganga above the barrage had hardly any water now.

The situation can only worsen in the coming weeks because the southwest monsoon covers most of South Asia only in June. There has been a small respite as unexpected rains lashed India’s northern and eastern areas. While this was bad news for farmers – whose standing crops have suffered – there is hope that this may raise the level of reservoirs, though only a little bit. The year 2015 was India’s worst monsoon season in six years and the rainfall deficit was as high as 14%, according to the India Meteorological Department.

The poor June to September rainy season, the second in a row, has been attributed to a strong El Niño in the Pacific Ocean, which typically affects the South Asian monsoon.

Read: El Niño does hit the monsoon, but some links still missing

The 2015 El Niño was the strongest since 1997, and scientists are examining if this has a link with climate change. While the link is still uncertain, it is clear that climate change acts as a threat multiplier following a poor monsoon, because higher temperature means more evaporation from reservoirs.

There has been a plan to start a floating solar farm in a reservoir in Kerala. Clearly, that would reduce evaporation, but the extent is not known yet.

Electricity production is just one part of India’s deepening water crisis. Much now depends on the advance monsoon forecast of the Met department due in April. Two consecutive droughts in most parts of the country have already resulted in distress in the farm sector, which provides livelihoods to some 70% of its 1.25 billion people.