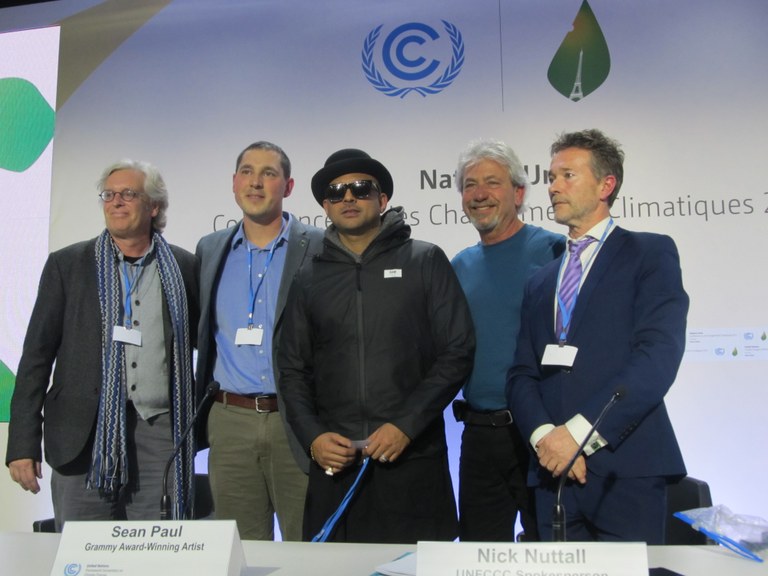 At least four out of the 16 innovative initiatives honored as winners of the prestigious United Nations climate change award at this year’s climate talks in Paris focus on water and sanitation.

They are part of the 16 game-changing initiatives from around the world that were honored at a special ceremony in Le Bourget, Paris last evening, where climate change talks have been taking place for the last two weeks.

The winning initiative that focus on water and sanitation include the Lifelink Water Solutions which is using ICT tools to provide safe, sustainable and affordable water in Kenya and Uganda; Solvatten Solar Safe Water Heater that is working to reduce carbon emissions while securing access to safe drinking water in Kenya.

Others are the Harvesting Geothermal Energy of El Salvador which is generating income with geothermal waste-heat and E-waste From Toxic to Green based in India which is creating jobs to keep e-waste out of landfills.

The UN Secretary-General Ban Ki-moon was the guest of honour at the gala event where the attendees were treated to powerful photos, inspirational videos and a lively musical performance by Sean Paul.

Ban said such initiatives could inspire leaders worldwide to take positive steps to reduce carbon emissions in their countries.

“These ‘Lighthouse Activities’ shine a light on the groundswell of climate action around the world,” said UN Secretary-General Ban Ki-moon. “As the world moves toward a future built on low-emissions sustainable development, these bold ideas can inspire leaders to be more ambitious in their own policies and actions.”

The Momentum for Change initiative is spearheaded by the UN Climate Change secretariat to shine a light on some of the most innovative, scalable and replicable examples of what people are doing to address climate change. This year’s winning activities range from a seriously cool smartphone that puts social values first to an initiative that is enabling 40 Latin American cities to take concrete climate action.

“I am honoured to celebrate the leadership shown by the people, organizations , companies and governments recognized as winners of the 2015 Momentum for Change Awards tonight,” said UNFCCC Executive Secretary Christiana Figueres said.

“By showcasing these remarkable solutions and the people behind them we can strengthen efforts that must not only start with an agreement here in Paris but must continue to build, as we accelerate the global transition to a low-carbon, highly resilient development path,” she said.

Each of the 16 winning activities touches on one of Momentum for Change’s four focus areas: Urban Poor, Women for Results, Financing for Climate Friendly Investment and ICT Solutions. All 16 were showcased at a series of special events during the UN Climate Change Conference in Paris, France.

The 2015 Lighthouse Activities were selected by an international advisory panel as part of the secretariat’s Momentum for Change initiative, which is implemented with the support of the Bill & Melinda Gates Foundation and The Rockefeller Foundation, and operates in partnership with the World Economic Forum and the Global e-Sustainability Initiative.