'We have been almost buried': the Sudanese villages being swallowed by sand

'We have been almost buried': the Sudanese villages being swallowed by sand

Standing next to a thin belt of rattling trees that represents the only line of green in vast stretches of orange desert, 70-year-old Hamud El-Nour Hamdallah recalls a time when this area in Sudan’s River Nile state was dense forest. If you had not found Goz El Halg village by nightfall, you would have to wait until morning to find your way out.

But decades of drought and deforestation have allowed sand to roll through the desert and swallow homes and farmland. Hamdallah and his community now go to bed not knowing if they will make it out of their homes the next day.

“It’s especially scary when the house is covered [in sand] at night and you can only wait in the dark until morning to dig your way out,” by shovelling through sand or using a tractor to wade through it, he said. 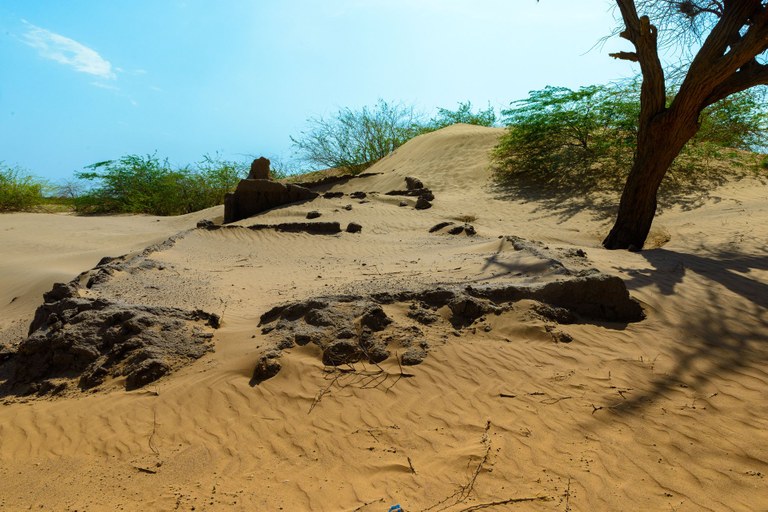 Former villages are now only visible as brick outlines in the sand. Photograph: Mohammed Basheer/HCENR/UNDP

The sand can even pour into homes through windows and doors or collapse buildings.

“We have been almost buried in sand,” said Hamdallah.

Research from a Sudanese government climate programme launched a decade ago shows that the boundary between desert and semi-desert has shifted 50-200km southward since the 1930s.

In many villages like Goz El Halg, whose name derives from the encroaching ‘gezan’, or dunes, the desert has finally engulfed places that used to have so much wood it drew people to live there and spurred a boat-building industry.

Hamdallah is one of many elders who have had to move villages three times as the sand took over. A previous village lying a few hundred metres away is now barely visible, with some houses reduced to brick outlines in the sand.

The village now serves as a playground for children, who play hide and seek behind steep orange dunes, some of which tower above the height of the houses that once stood there.

“I don’t like what has happened to the old village,” said 14-year-old Ruwaya Ferra, a student at the local school.

The children here are taught about the importance of conserving trees and water to stop history from repeating itself. Small gangs of shy girls know all the words to jaunty songs about protecting trees, because they sing them once a week or more at school.

Teachers stress the importance of protecting the environment, starting with the plants sheltered in small rockeries in the otherwise barren school yard, and pen poems about shooing goats away from the precious patches of green.

“Don’t cut a leaf off a tree because we don’t want drought and desert to come to us,” said Ferra, repeating one of the mantras drummed into new generations.

But tree-cutting for charcoal and land degradation due to mismanagement are not the only factors at play in Sudan. People here started feeling the effects of global warming in the 1980s, with temperatures of over 50C making summers unbearable and winters uncomfortable, erratic rains ruining harvests and floods or droughts turning arable land into dust or gravel.

Ismail El Gizouli, a Sudanese climate change negotiator and member of the Intergovernmental Panel on Climate Change (IPCC), said:“Since the 1970s, we [the world] are moving very fast towards disaster, towards the end of the earth. So this is why we have to move very quickly now [to cut greenhouse gas emissions].” 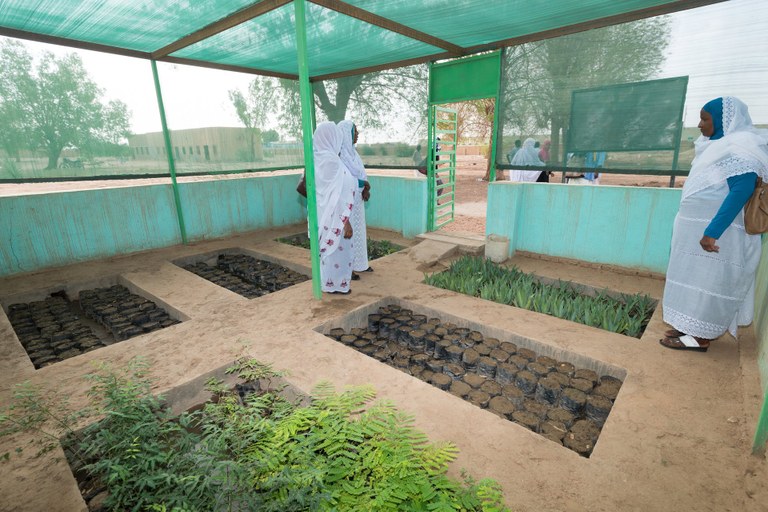 In Sudan, decades of conflict, international sanctions against President Omar al-Bashir’s government and the loss of most of the country’s oil and forests in 2011 with South Sudan’s secession have exacerbated the effects of climate change.

“The problem is caused by the big emitters [of greenhouse gases] but we are the first who are affected because our backbone is very weak, our infrastructure very weak,” said Gizouli.

While developed countries can absorb weather shocks, Sudan’s ability to respond to droughts and floods is as poor as its people, two-thirds of whom are farmers.

Currently Africa only attracts 5% of the world’s climate-related funding, despite suffering disproportionately from the impacts of global warming.

“This is why people are attacking the rich countries. They want to live in luxury – let us therefore die,” said Gizouli, who is pushing richer countries for money for more projects to adapt to climate change.

In Sudan, the Forests National Corporation started reserving areas in the 1980s, and a decade later the Sudan National Adaptation Programme of Action started planting belts of trees to protect fields and homes. Aid from Canada, the UK and the United Nations Development Programme is being spent on rehabilitation and irrigation projects in desert villages.

In River Nile state, government officials say that around 8,000 trees have been planted over the past two years and that, as farmers’ crop yields increase, communities are turning to tree nurseries and swapping charcoal for butane gas. 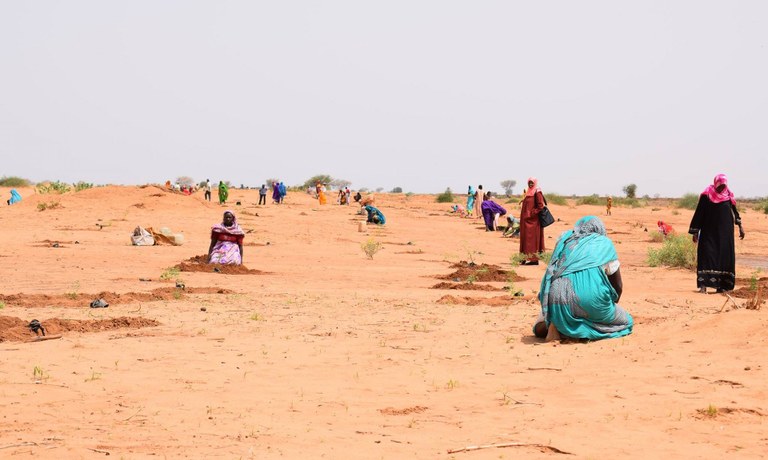 Planting some of over 23,000 tree seedlings along 12km of the edges of the wadi banks to reverse erosion as part of a project by Sudan’s Forests National Corporation. Photograph: UNEP

But it will take significant investment to scale up climate adaptation projects to stop heat, sandstorms and floods from sweeping away homes and fertile top soils.

In Goz El Halg, Hamdallah and other elders come daily to water and bolster another 2.5km-long greenbelt planted five years ago with water from a well powered by a solar-pump that has eased reliance on the rain.

These trees are the last line of desert defence standing between the burial or survival of a village that has already lost half of its residents to El Damer, the state capital around two hours’ drive away in a 4x4 through mostly empty desert.

But Hamdallah believes that the people that stayed are better off than those who ended up in Sudan’s increasingly overstretched and under-resourced urban areas.

“I’m delighted about these trees because they protect us,” he said, surveying the still-growing trees through a pair of oversized shades as he mulls whether or not he will move again in his lifetime. “I don’t think so. They have saved us from the sands, I think.”